Dedicated on July 3, 1915, this 27-foott tall monument honors Nathanael Green, a Major General in the American Revolution. The monument consists of two statues, one with Nathanael Greene on a stallion and a second statue of Athena with a shield and laurels. The monument originally contained cannons on either side, however, those have been removed. 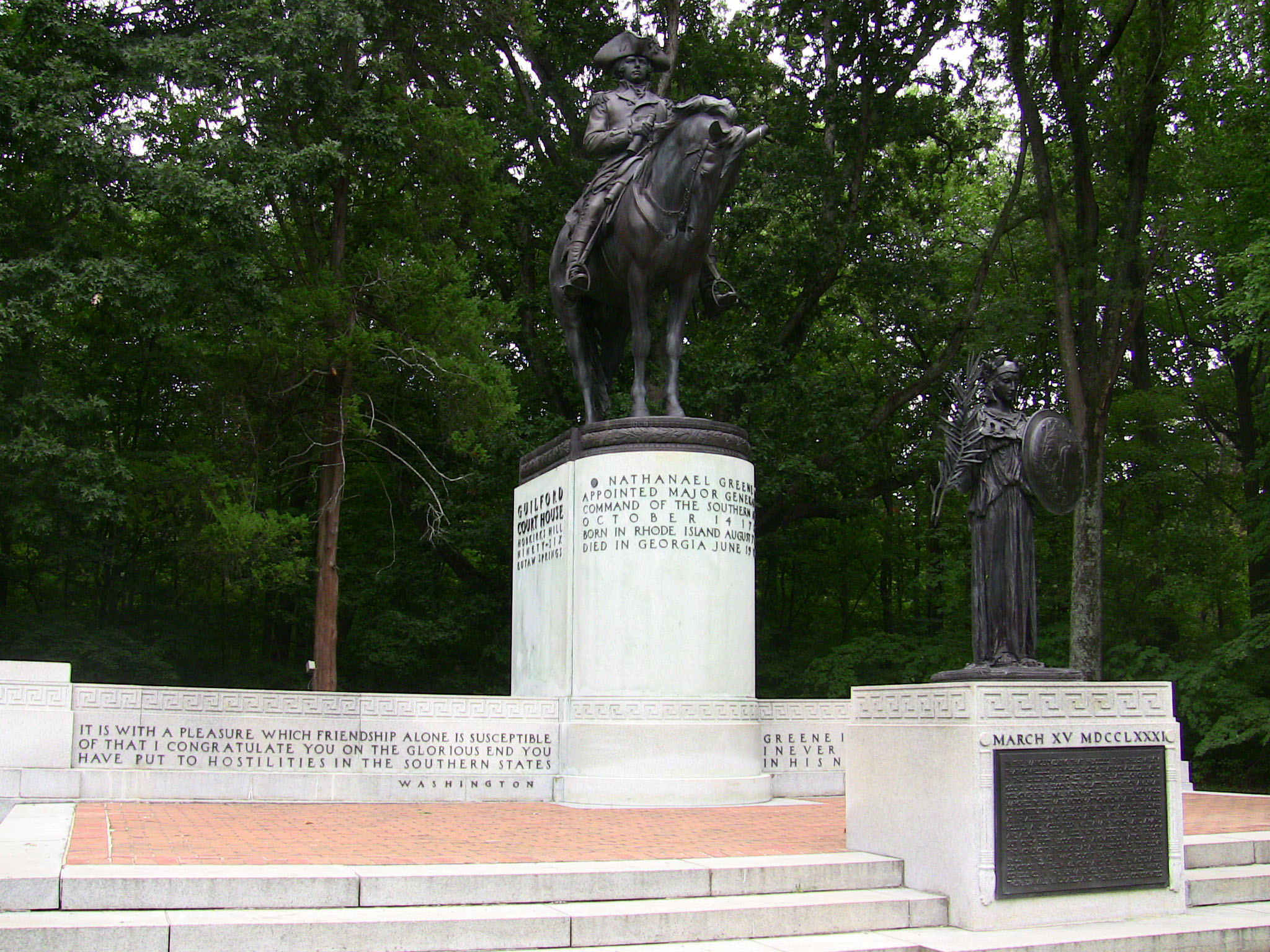 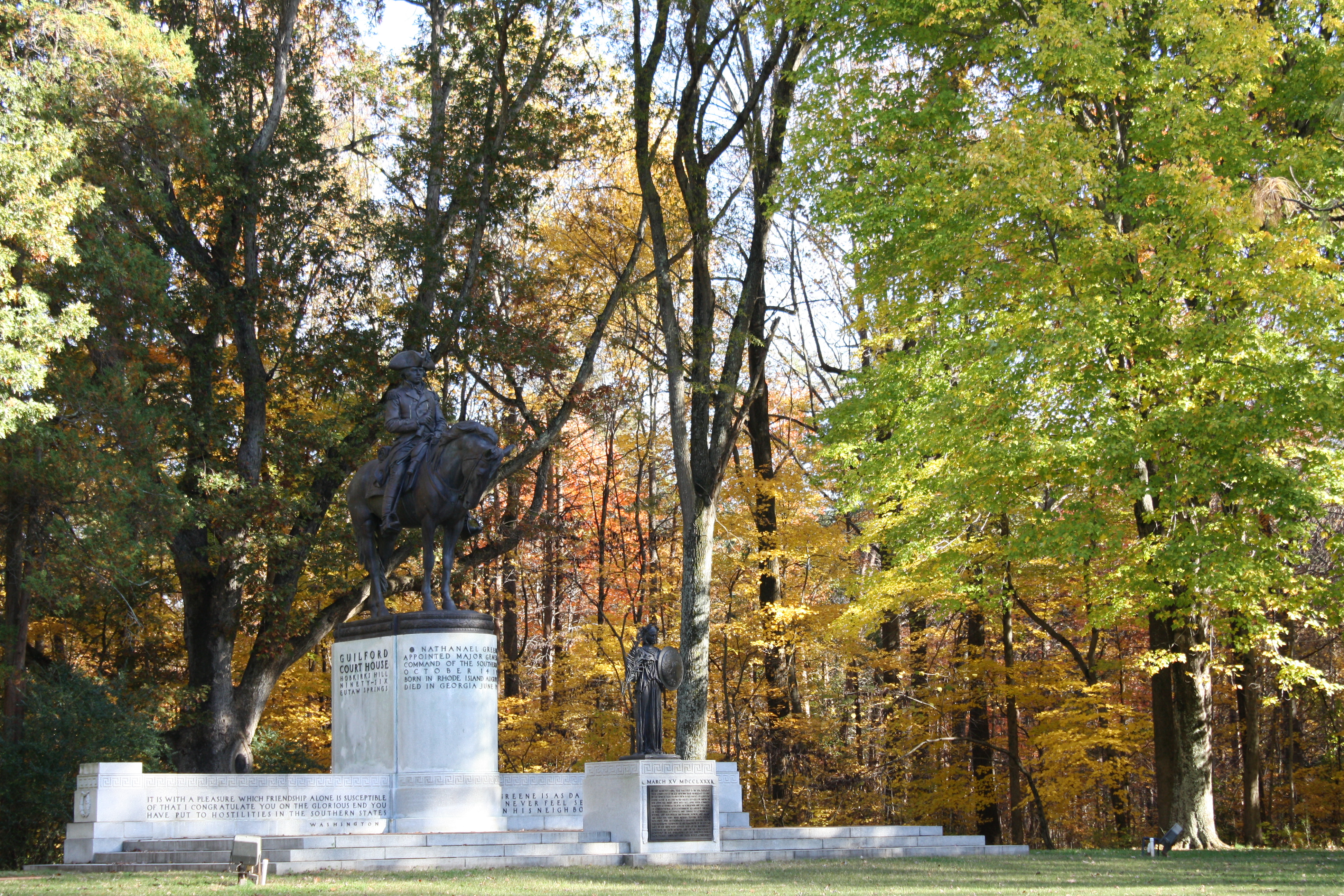 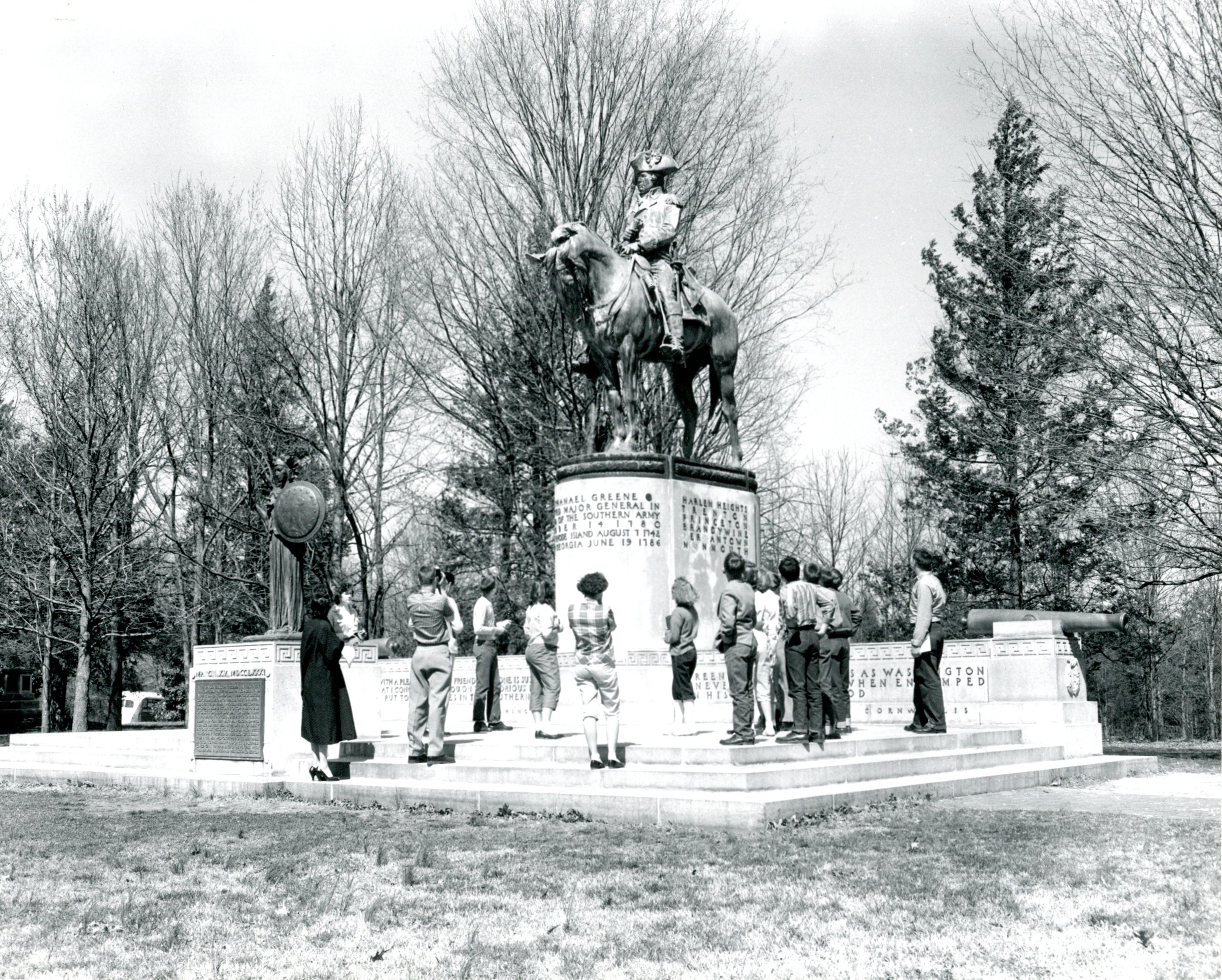 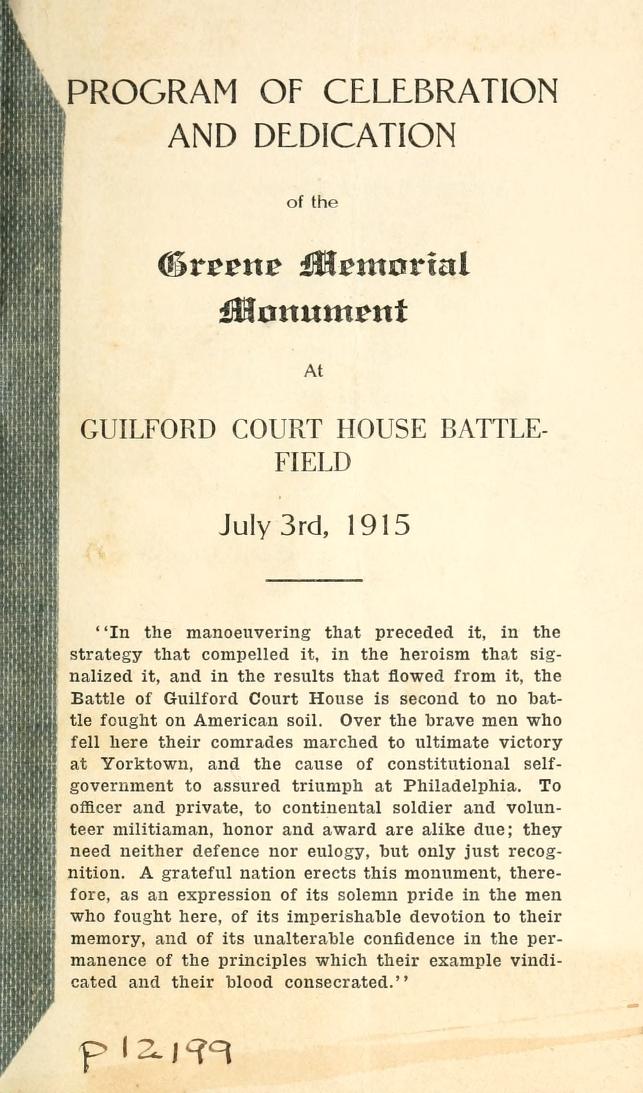 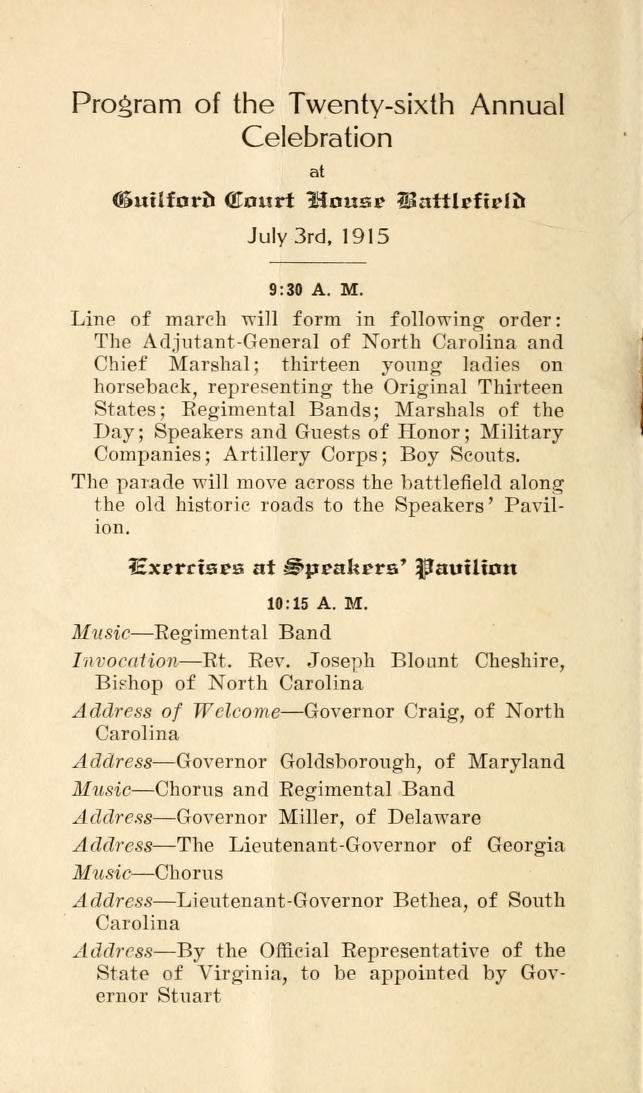 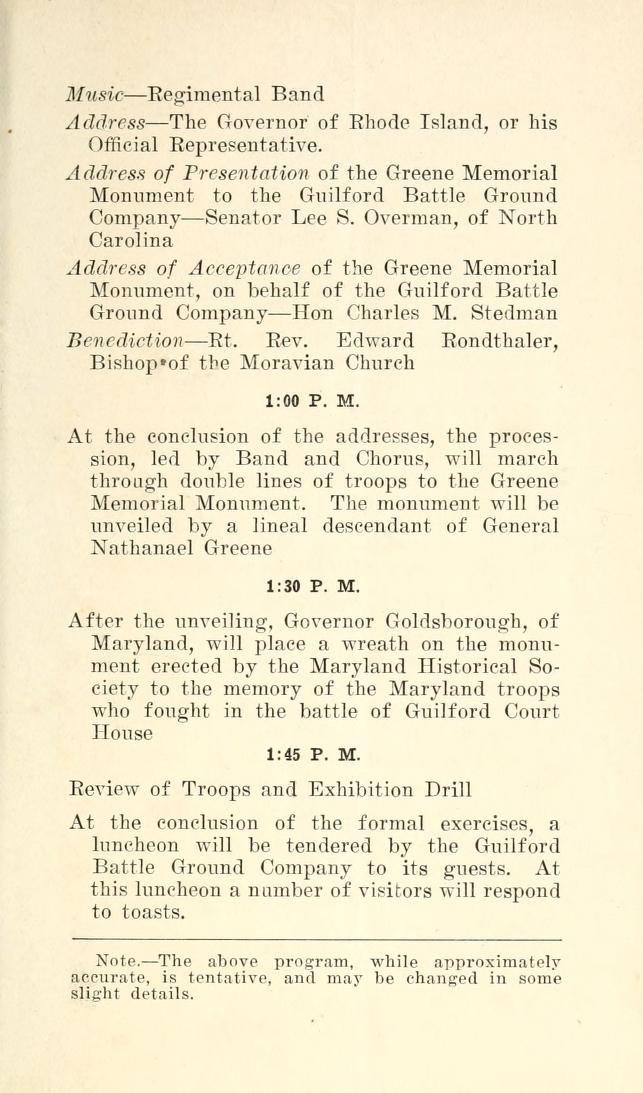 Nathanael Greene, a Quaker, was born in 1742.  After being expelled from the Society of Friends in 1773 due to his interest in military affairs, he followed his dream of becoming a soldier.  Greene earned a rapid series of promotion and was eventually was appointed by President George Washington to lead troops in the South during the American Revolutionary War.  Greene led troops through many battles, including the Battle at Guilford Courthouse.  Although outnumbered and forced to abandon the field, Greene's army avoided capture and weakened the British military.  Greene and his man remained in the field and were instrumental in the events and battles leading up to the British to surrender in Yorktown.

The monument was originally approved in 1857, but construction was put on hold due to the start of the Civil War. After a campaign was launched by the Guilford Battle Ground Company to secure funding by the United States Congress, federal funds were approved in 1911. With $30,000 for the monument from Congress, leaders of the effort commissioned sculptor Francis H. Packer to build the monument.

The base of the monument is made out of granite while the lettering and two statues of Nathanael Greene are made out of bronze. The west facing monument features two bronze statues, one of Green on his stallion and the other of a classically-garbed Athena with a shield and laurels.

The monument was dedicated on July 3, 1915 with a ceremony that included a parade led by the thirteen young ladies on horseback, regimental bands, marshals of the day, and speakers and guests of honor. Military companies and artillery corps that consisted of up to 700 soldiers attended the event along with hundred of families and the help of local boy scout troops. Governors from different states including Maryland, Delaware, Georgia, South Carolina and North Carolina spoke during the ceremonies.

The monument contains the following inscriptions:

MARCH XV MDCCLXXXI / IN THE MANOEVERING THAT PRECEDED IT, IN THE STRATEGY THAT SIGNALIZED IT, AND IN THE RESULTS THAT FLOWED FORM IT, THE BATTLE OF GUILFORD COURTHOUSE IS SECOND TO NO BATTLE FOUGHT ON AMERICAN SOIL. OVER THE BRAVE MEN WHO FELL HERE THEIR COMRADES MARCHED TO ULTIMATE VICTORY AT YORKTOWN, AND THE CAUSE OF CONSTITUTIONAL SELF GOVERNMENT TO ASSURED TRIUMPH AT PHILADELPHIA. TO OFFICER AND PRIVATE, TO CONTINENTAL SOLDIER AND VOLUNTEER MILITIAMAN, HONOR AND AWARD ARE ALIKE DUE. THEY NEITHER NEED DEFENSE NOR EULOGY BUT ONLY JUST RECOGNITION. A GRATEFUL NATION ERECTS THIS MONUMENT, THEREFORE, AS AN EXPRESSION OF ITS SOLEMN PRIDE IN THE MEN WHO FOUGHT HERE, OF ITS IMPERISHABLE DEVOTION TO THEIR MEMORY, AND OF ITS UNALTERABLE CONFIDENCE IN THE PERMANENCE OF THE PRINCIPLES WHICH THEIR EXAMPLE VINDICATED AND THEIR BLOOD CONSECRATED.

On pedestal to Greene's left:

On pedestal to Greene's right:

On base to Greene's left:

GREENE IS AS DANGEROUS AS WASHINGTON I NEVER FEEL SECURE WHEN ENCAMPED IN HIS NEIGHBORHOOD. / -CORNWALLIS

On base to Greene's right:

IT IS WITH A PLEASURE WHICH FRIENDSHIP ALONE IS SUSCEPTIBLE OF THAT I CONGRATULATE YOU ON THE GLORIOUS END YOU HAVE PUT TO HOSTILITIES IN THE SOUTHERN STATES. / -WASHINGTON