The Dry Goods Store, also known as the Old Master Armorer’s Quarters, the Samuel Annin House, or more simply Building 35, is a historic building in the Lower Town of Harpers Ferry. Constructed in 1812, it has been used for many different purposes including as an apothecary, recruiting office, stores, and boarding houses. Perhaps the structure is most well-known for being the home of the U.S. Armory’s Master Armorer from around 1821 to 1859. Today owned by the National Park Service, the Old Master Armorer’s Quarters is depicted as a dry goods store exhibit to interpret Harpers Ferry’s commercial history. The second floor houses an Officer’s Quarters and the James Taylor Room to showcase Civil War-era accommodations.

Today the building is interpreted as a dry goods general store. Image obtained from panoramio.com. 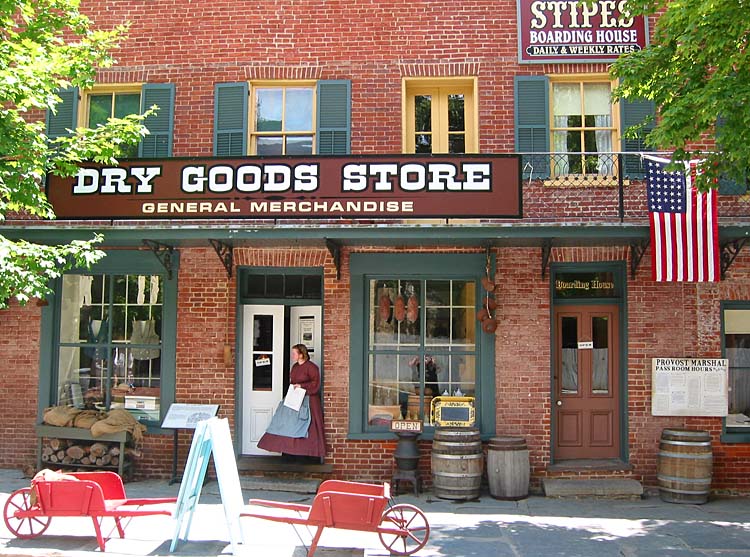 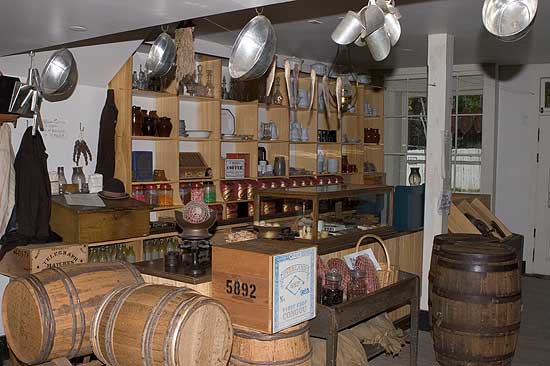 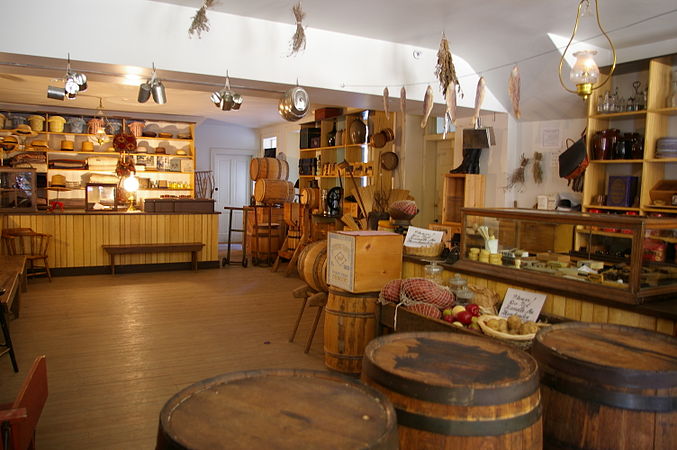 In 1812, Joseph Annin, son of armory paymaster Samuel Annin, built a two-story brick building on a plot of government land. For several years he and his father operated an apothecary shop there, and left Harpers Ferry in 1818. In 1821, the government purchased the apothecary and renovated it to serve as the residence for the armory’s Master Armorer. Over the years it housed Master Armorers Armstead Beckham, Benjamin Moor, James H. Burton, and Samuel Byington. In 1859, the New Master Armorer’s Quarters was erected nearby. After John Brown’s raid, a company of U.S. troops were stationed to guard the armory, and used the old quarters as a recruiting office. The building was left vacant during much of the Civil War; around 1864, a Mrs. Cornelia Stipes operated a boarding house from it. One of her boarders was James E. Taylor, a sketch artist for Frank Leslie’s Illustrated Newspaper who stayed in Harpers Ferry for several months.

After the Civil War, the government decided not to rebuild the armory, and instead began selling off the property. The Old Master Armorer’s Quarters was purchased in a public auction by James McGraw. A notable businessman, McGraw had enterprises in selling hardware, coal, and operating a beer bottling plant. In 1882, he built two new structures, known today as the James McGraw Building and the Provost Marshal Office, next to the Old Master Armorer’s Quarters. In 1891, McGraw enlarged both the quarters and the Provost Marshal Office, adding a third floor and converting them into a boarding house. A post office and a store were also located there. In 1897 the McGraw family went bankrupt and relinquished ownership of their buildings.

In 1899, William Doran purchased the building and ran a store from it with his sister. The business shut down upon William’s death in 1926. Afterwards a bakery operated there until around 1929. Little is known about the building from the 1930s-1950s but it is believed that the Dorans rented it out to tenants. In 1952, the Doran family transferred ownership of the property to the West Virginia state government, who the following year transferred it to the National Park Service.

Today the building is part of the Harpers Ferry National Historical Park and acts as the park’s Dry Goods Store Exhibit. The first floor displays typical nineteenth-century merchandise and the second floor houses two more exhibits: the Officer’s Quarters and the James Taylor Room. The Officer’s Quarters is furnished to depict the usual accommodations of a Civil War officer, while the James Taylor Room depicts the average accommodations of a boarding house.