Built in 1911 as the 12th Avenue or Dearborn Street Bridge, it was renamed after Filipino hero Dr. Jose Rizal in 1974. The bridge symbolizes Seattle's growth and its connection to the Spanish-American War, as well as the Philippians. The heavy regrading that helped build Seattle's downtown separated downtown and the residential areas, thus the bridge was necessary -- one of Seattle's first steel-arch bridges. 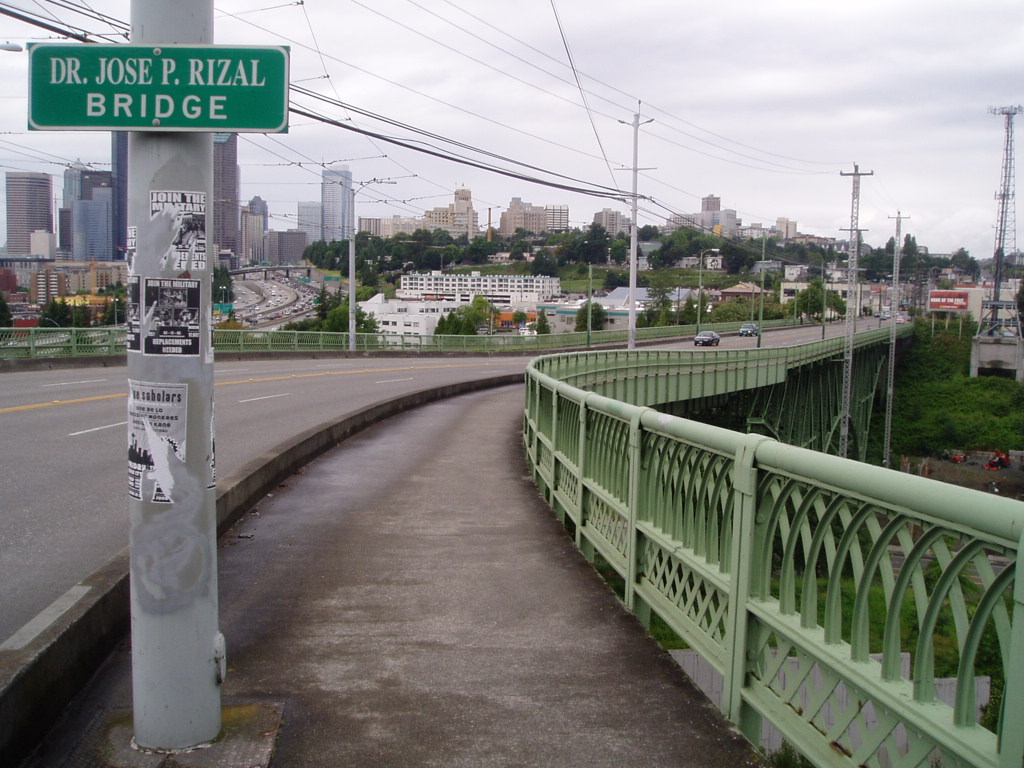 Dr Jose P Rizal Bridge (12th Ave Bridge) does more than connect one part of Seattle to another, it connects Seattle to its history. Much of Seattle's boom during the last part of the 19th century and early part of the 20th Century can be attributed to the Klondike Gold Rush, and later the Alaska Gold Rush. That boom inspired railways to arrive, as well as shipping industries -- and as the industries arrived, so did the people. Seattle grew to become a major port city, which included moving troops and goods to the Philippines during the 1898 Spanish-American War and aftewards when the island became a U.S. territory.

As the people arrived in droves to Seattle, heavy regrading occurred as a means of flattening land and using that material to build the city, leaving parts of the city isolated, notably residential regions from the growing downtown area. Hence, a steel arch bridge was  planned, and then constructed in 1911.

The regrading and need for a bridge notes Seattle's exceptional growth and the resultant environmental  and urban changes it fostered. Gold booms led to railway construction and a flourishing shipping industry. Investors (notably railroads) looked towards Seattle's boom as potential for future, copious trade with Asia. As such, the dawn of the Spanish-American war in 1898 allowed Seattle to be a jumping point for military personnel and goods to the Philippines. The war, and resultant occupation of the Philippines, led to a burgeoning shipping industry  between Seattle and the Pacific Islands, which helped Seattle grow.

In fact, various Seattle city parks arose during the early parts of the 20th Century reflecting the Seattle-Filipino connection: Park in Capitol Hill (named for the war’s volunteer soldiers); Woodland Park, which  includes a statue honoring fallen soldiers from the Spanish-American War; and several others.

By 1974, the bridge also received a Filipino name, Dr Jose P Rizal Bridge, a Filipino hero known for his late 19th century writings related to the Philippine Propaganda and Reform Movement. He also wrote his novels that detailed the horrors of Spanish colonial rule in the Philippines, notably by Catholic friars. Te book was banned in the Philippines, though copies were smuggled into the country, and he then became a target of the police and later exiled. By age 35, in 1895, he was apprehended, tried, and executed -- creating greater resentment for the Spanish in the Philippines.
The lasting legacy of the Filipinos in Seattle is noted by the name of the bridge, and the bridge itself stands as a testament to the evolution of Seattle from Western boom town to major metropolis, noted by environmental alterations, strong shipping and railway industries, and steel construction of bridges and downtown buildings.