In 1912, Congress dedicated 24,700 acres of mountainous land to the U.S. Fish and Wildlife Service to create the National Elk Refuge. The refuge was created to save the Jackson Elk population, which was facing starvation due to harsh winters. Today, the refuge is a winter home to all sorts of wildlife, including elk, bison, swans, bald eagles, and north american gray wolves. The refuge provides, preserves, and restores a winter habitat for the Jackson Elk and many other endangered species. The refuge aims to educate visitors about the importance of wildlife conversation.

The Welcome Center of the National Elk Refuge

Coloring of the wolves refuge event 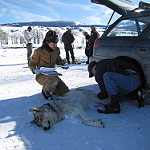 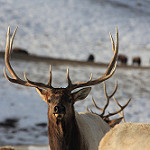 Elks fighting for mate on the refuge 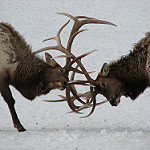 In the 20th century, livestock were competing with elk for food. There was a limited amount of natural grasses, and elk were known to eat haystacks farmer's had reserved for their livestock. Along with competition, Wyoming faced many years of long, harsh winters which were deadly to the elk population.
Wildlife photographer, Steven Leek brought national attention to the endangered starving elk in 1910 through writings, photographs, and lectures. The Wyoming legislature responded by appropriating $5,000 for Leek and others to purchase and voluntarily feed the elk on their land. The following year, Wyoming asked for support from Congress. Congress appropriated $20,000 to feed, restock, and investigate the situation of the elk. Edward A. Preble of the U.S. Biological Survey was sent to asses the conditions of the Jackson Elk herd. It was Preble who wrote the establishment of a winter elk refuge was "the best solution of the problem or properly caring for the elk in the winter." The park was established through varies Acts of Congress. The main act in 1912, set aside land for a winter game reserve in Wyoming.
In 1935, the Six Million Dollar Fund was created by an act of Congress and was used to purchase an additional 16,400 acres for the refuge.In 1938, the US transported four swans from the Great Lakes to the refuge. This was the first successful transplant of birds in the United States. Although the refuge was created for elk, there are now 47 different mammal species and 175 different bird species.
The Jackson Elk are the priority species of the refuge. Approximately 11,000 elk exists currently in the Jackson herd. The elk are able to experience regular migration patterns within the refuge's enormous size and individual ecosystems. Elk migration can take days to weeks, and some herds may travel up to 60 miles.
The National Elk Refuge is no stranger to the United State's national bird. The Bald Eagle is the only eagle unique to North America, and you can spot plenty of them making homes among the forests of the refuge. Due to the consumption of toxic chemicals like DDT, Bald Eagles were considered endangered species before 1972. However, acts of conservation have moved their status to only threatened. At the National Elk Refuge, cottonwood trees have been nicknamed "eagle trees", because that is where tourists are likely to spot them.
In 1995, the Endangered Species Act allowed 31 gray wolves from Canada to be released and studied within the Yellowstone area. The animals were tagged so that conservationists could document reproductive success, deaths, and breeding pairs. The National Elk Refuge recognizes the Pinnacle Peak Wolf Pack as their responsibility and care for them as they do the elk. In 2012, wolves were removed from the endangered species list.
The National Elk Refuge has one of the largest volunteer programs in the US Fish and Wildlife Services regions. They are partnered with Boy Scouts, who used elk sheds donated by the refuge to build the infamous elk antler arches at every entrance of Jackson Town Square.
Elk Fest is an annual auction of elk antlers which begin the elk begin to shed in March. Collecting the fallen antlers prevents others from illegally removing them, an act known as poaching. Thousands of Boy Scouts and volunteers spend weeks collected the antler sheds to be auctioned. Every year, approximately 9,676 pounds of antlers are collected and sold.
For population control purposes, the National Elk Refuge offers elk and bison hunting. Both types of game can only be hunted when a permit is obtained by the US Fish and Wildlife Services. Hunting can only be done within a specific area for a determined amount of time. Because the demand is so high, once a hunters has a license to hunt elk or bison, he must complete an application for a hunting permit on the refuge.