The Columbia House, also known as the Philip Haxall House, is a historic home that was constructed between 1817 and 1818. This two-story, three bay Federal-style brick dwelling is one of about ten outstanding examples from this architectural period. After its sale in 1834, it was used as the main academic building of Richmond College. From 1917 until 1954, the structure housed the T.C. Williams School of Law of the University of Richmond. The Columbia house was listed on the National Register of Historic Places and the Virginia Landmarks Registry in 1982.

The Columbia House, also known as the Philip Haxall House 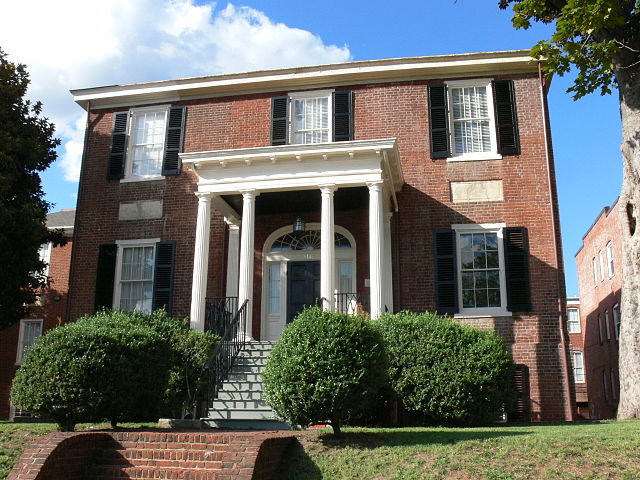 The Columbia House is a significant commercial, architectural, and educational landmark in Richmond, Virginia. It serves as a fine example of residential architecture from the city's early Federal period. It was built between 1817 and 1818 by Philip Haxall, who moved to Richmond in 1810 to manage the Columbia Flour Mills.

Philip Haxall was a Petersburg native and a friend of Chief Justice John Marshall. He and his brother William bought the Columbian Mills from creditors of David Ross. The mill, which was established by Ross in the 1790s, had suffered financially from market fluctuations caused by the Embargo Act of 1807. Under Haxall, the mill again became successful as Richmond expanded its share of the flour market following the War of 1812. The growing prominence of Richmond during the early 19th Century was reflected in the popularity of stylish Federal-style architecture, such as this example here.

Philip Haxall died in 1831. In 1834, the Haxall family sold the home to the Virginia Baptist Educational Society, who converted the home into the main academic building of Richmond College (now the University of Richmond). The seminary had formed in 1830 to prepare young men for entry into the Columbian College in Washington. By 1840, the seminary had grown large enough for the Education Society to transfer its responsibilities to the trustees of Richmond College. Around the time of its purchase, the house's refined architecture and the property's lush gardens were highly-praised in the August 22, 1834, issue of the Baptist Religious Herald.

Since its acquisition by the Educational Society, the home continuously served as an academic building, with one exception. During the Civil War, the structure was briefly used to house a Confederate hospital and later as barracks for Union troops. When Richmond College reopened after the Civil War, the home was used as a residence for professors of the college. In 1914, the college moved to a new campus, though the Law School returned to Columbia in 1917. From 1917 to 1954, the house served as the university's School of Law until its move to a new facility on the Westhampton Campus. UR sold the building to the American Historical Foundation in 1983, which maintained its offices and a military museum there before selling Columbia in 2005.

The Columbia House is rather unusual in design. It is distinguishable by its fanlight doorway. The doorway was originally located on its former Lombardy Street facade but now faces Grace Street. The exterior of the structure is symmetrical, but the interior is unconventional in that it is not of the typical center hall plan. Instead, the first floor houses a large reception or assembly hall, a stair hall, and an adjacent parlor and dining room. It also features a classroom wing, which was built onto the north wall in 1924. The home remains largely unchanged from its original appearance except from the 1924 relocation of the entrance (at which time the porch was also remodeled).