This monument commemorates the Civil War battle that took place between North Dakota's Sioux Indians and the United States Army near this location on September 3rd, 1863. The battle began when cavalry led by General Alfred Sully attacked a large encampment of Sioux Indians. The battle claimed the lives of 150 or more Sioux along with 156 prisoners that included Sioux men, women, and children. The United States Army lost 20 men in addition to around 50 who were wounded. The battlefield site contains a marker, two monuments, one for Indians and one for Americans, and a museum built in 1941 containing exhibits on the battle and the expeditions of Sully and his counterpart Sibley. The site also contains a picnic area with a shelter, table, pit toilets, and a parking lot, all beside a small lake.

Monument to the fallen Union soldiers of Whitestone Hill Battlefield, constructed in 1909. 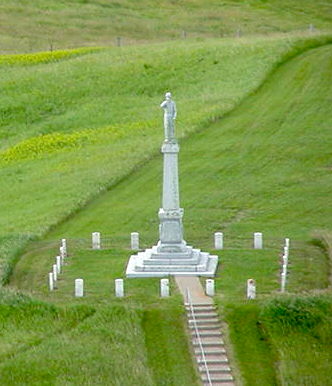 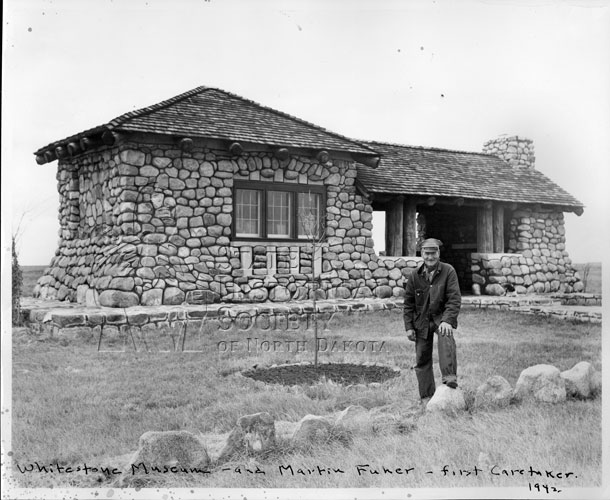 Sioux pictograph, drawn as directed by Takes-His-Shield, some fifty years after the battle occurred. The pictograph, drawn by Richard Cottonwood, gives the Indian story of the engagement. A copy of the picture is exhibited in the museum.

Monument honoring the Sioux Indians who lost their lives 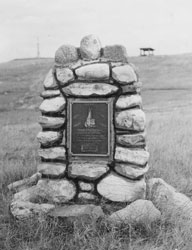 General Alfred Sully and General Henry Sibling led expeditions into North Dakota in search of Sioux Indians responsible for attacks in Minnesota the previous year. Sully and his men traveled up the Missouri River and made their way to Whitestone Hill, where they found a sizable encampment of Sioux Indians hunting and preparing meat and supplies for the winter ahead. On September 3rd, 1863, Whitestone Hill became a bloody battlefield and is known as the bloodiest scene in North Dakota.

Sully's troops, composed of the Sixth and Seventh Iowa Cavalry, the Second Nebraska Cavalry, and the artillery battery, moved in on the Indians, who at the time had discovered the troops' presence, and the vast majority of them were preparing to flee. Negotiations broke down when the Native Americans refused the demand of unconditional surrender. After the attack, the Sioux were forced out of their camp, leaving many of their belongings and crucial supplies for the winter, including hundreds of pounds of buffalo meat. The Sioux attempted a counterattack, wounding and killing a few more soldiers, but this action had little effect on the outcome of the conflict.
The army's casualties were very light compared to the Sioux, twenty men to 150 or more, and also many prisoners were taken. their winter supplies were burned or destroyed. The battle represented a nearly complete victory for American troops, whose objective of putting down Indian resistance to settlers and westward expansion was what drove Sulley's campaign.
Whitestone Battlefield State Historic Site serves to remember the lives lost at the site on both sides. A large monument erected in 1909 stands to remember the troops that lost their lives for their country. A monument is also in place to remember the Sioux who were lost in the bloodshed. The museum, built in 1941, contains exhibits on the battle as well as Sulley and Sibley's campaigns into North Dakota in 1863.
In contrast to the bloodshed that took place at this site, the area is now part of Whitestone Battlefield State Park which offers a picnic area and place to reflect upon the tragedy that occurred on the grassy battlefield near the lake.

May 16 through September 15, Thursday through Monday