Built in 1856, Old St. Patrick's Church predates the Great Chicago Fire and has long served as one of the landmarks of Chicago's West Town. The church served the growing Irish community of Chicago during the 19th century. Today, it is home to a large and active congregation and many events, including a festival known as "World's Largest Block Party." 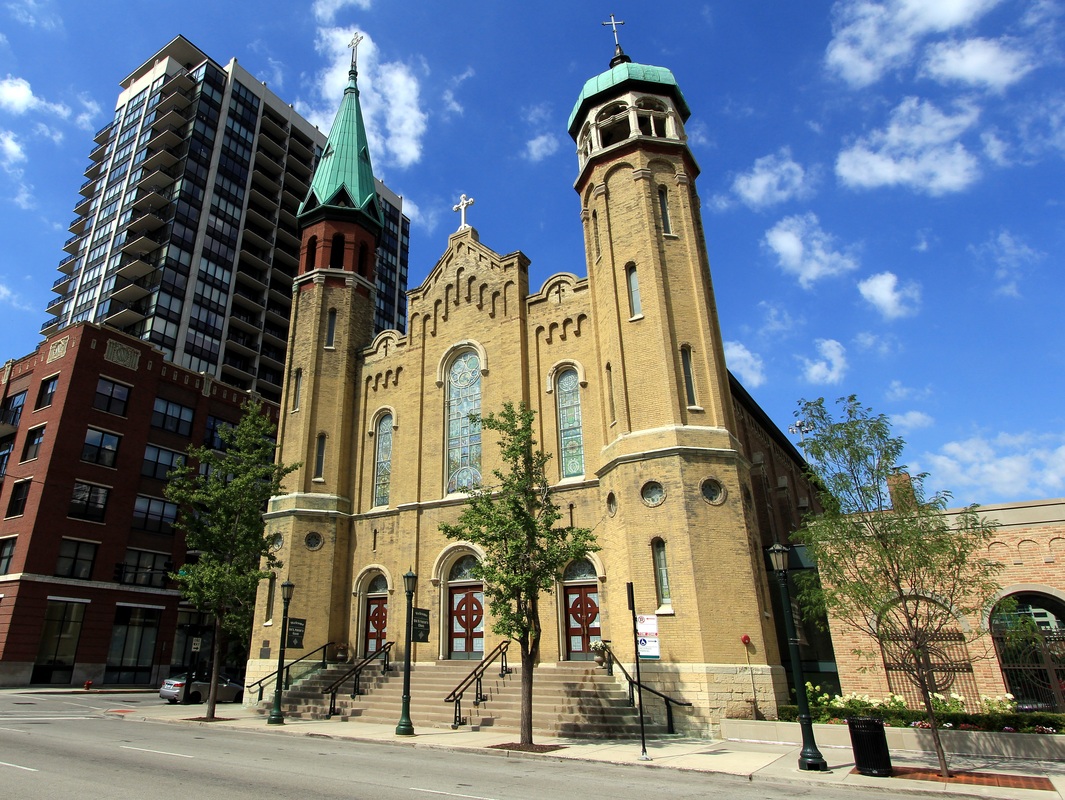 One of the oldest public buildings in Chicago -- and one of the few major buildings constructed before the 1871 Great Fire that is still standing, the Old St. Patrick's Church has been a landmark of Chicago's West Town since 1856. The church's congregation dates back to 1848 when it was established by first-generation immigrants from Ireland.

Irish immigrants held their first service after formally establishing St. Patrick's church on Easter morning in 1846. St. Patrick's became the first English-speaking parish in the city. The current building was erected in 1856 and opened on Christmas Day.

The church is a monument to the efforts of Irish immigrants in Chicago. Irish Immigrants numbered in the hundreds in 1830s. By the time of the Civil War, the city boasted the fourth-largest urban Irish population in America. Unlike other leading cities such as New York, Philadelphia, and Boston, these early arrivals came to Chicago within decades of the city's founding. Irish laborers and business leaders were influential in building the city. Irish laborers built the Illinois & Michigan Canal (1836–1848) in addition to many of city's wharves, railroads, stockyards, and steel mills. With the arrival of Irish and other immigrants, Chicago became the world's fastest growing city towards the latter part of the 19th Century.

The Catholic influence on Chicago, notably from the Irish, proved highly influential. Catholic schools became prominent, with many nuns serving as teachers. Catholic churches provide numerous social services that aided incoming immigrants and. Over time, the growing Chicago police force and democratic party had ties to the Irish and Catholicism. Most notably, two long-time mayors (part of the "machine,") were Richard J. Daley and his son Richard M. Daley, both Irish Catholics.

The current church building was designed in a Romanesque style by two of Chicago’s earliest practicing architects Augustus Bauer and Asher Carter, inspired by the Celtic art exhibit at the Columbian Exposition of 1893 and the Book of Kells in Ireland. Thomas A. O’Shaughnessy designed, constructed, and personally installed the 15 stained-glass windows of Old St. Patrick’s between 1912 and 1922. Meanwhile, the twelve side windows were inspired by the Celtic designs of Ireland’s Book of Kells.
In 1956, as part of the 100-year anniversary, the first St. Patrick’s Day downtown parade was restarted to commemorate the event.  And then, in 1985, The first Old St. Patrick’s “World’s Largest Block Party” draws 5,000 people to Des Plaines Street and has since grown to become a  large church and civic event.
In the late 1970s and early 1980s, membership had fallen dramatically, but by 1989, Old St. Patrick’s membership rose to 2,000 and boasted a mailing list of more than 10,000. Meanwhile, Old St. Patrick’s opened the first new Catholic grammar school in the Chicago Archdiocese region in more than a quarter of a century.