The Mariners House at 11 North Square, Boston, in the heart of the city’s historic North End, was originally built in 1847. The building still stands today as one of the oldest continuously operating sailors’ boardinghouses in the United States. It is also famous because of the influence of its first preacher and one of its founders, Father Edward Thompson Taylor, also known as the “Sailor’s Preacher.” The historic hotel is the result of the combined efforts of Father Taylor, the Boston Port society, and the Seaman’s Aid Society (a women’s auxiliary to the Boston Port Society; they later merged in 1867). 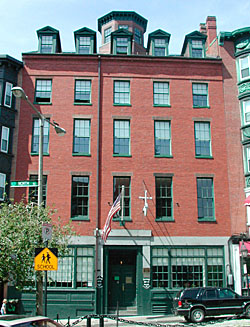 In 1829, Father Edward Thompson Taylor began preaching at the Seaman’s Bethel which, at the time, operated out of an abandoned Methodist chapel close to the current site.  He was a former seaman himself and easily related to the other sailors coming in and out of the port of Boston.  The original Mariners House opened in 1837 in a building on Ann Street.  However, this structure was condemned in 1845 and the Society needed to find a new space.  Father Taylor was such a popular preacher that he was able to use his influence to raise enough funds for the construction of the Mariners House on North Square in 1847.

The mission of the Society was to “improve the moral, religious and general condition of seamen and their families; to offer aid and encouragement to the poor and industrious seamen; and to promote the education of seamen's children.”  The construction of the Mariners House supported their mission.  It also helped to eliminate a known problem of robbing sailors while they lodged elsewhere.   It was fairly common for other boardinghouses to charge sailors outrageous prices to stay in their rooms and then to steal from them too.

The House was designed in Greek Revival style.  It features four and one-half stories, consisting of the main block facing the street) and a narrower portion that runs behind the building at a slight angle.  The entire structure is made of red brick construction.  In January 1998, a massive interior renovations project began in order to bring the accommodations up-to-date with current standards for first-class boardinghouses.  It now has common areas, a parlor, a library, a galley, a chapel/meeting room, and 22 guest-rooms decorated to give visitors a sense of life in the 19th century.

The Mariners House was added to the National Register of Historic Places in 1999.  It continues to be owned and operated by the Boston Port and Seaman’s Aid Authority.  There are 25 volunteers who oversee the operations, much of which is funded by private endowments and charitable contributions.    Guests to the hotel must show proof of active maritime status or retired status (with 20-years active).  The hotel is reserved exclusively for the men and women who work at sea, including but not limited to merchant mariners, afloat military personnel, maritime institution affiliates, and other professional seafarers and their families.  Nevertheless, the structure can be viewed from the outside on a tour of the North End.  Only one narrow building stands between the Mariners House and the famous Paul Revere House.