Originally known as Loew’s State Theatre, the Landmark Theatre exemplifies the grand movie palaces that were built in the 1920s. Opened in 1928, the theater was designed by the architect Thomas Lamb in an ornate style that drew heavily on Middle Eastern and Asian iconography. Early audiences who attended shows would have marveled at the $40,000 Tiffany chandelier in the lobby, the pagoda fountain and fishpond upstairs, and the 1,400 pipe Wurlitzer organ in the theater. While Loew's State Theatre thrived through the 1940s, competition from television and suburban multiplexes created financial difficulties. After briefly closing in 1975, the theater was saved from demolition by community members who formed the group Syracuse Area Landmark Theater (SALT). Since then, the renamed Landmark Theatre has undergone a resurgence in popularity, hosting Broadway shows and touring musicians, and remaining a vital link to the past in downtown Syracuse.

Exterior of the theater on a snowy upstate New York day. 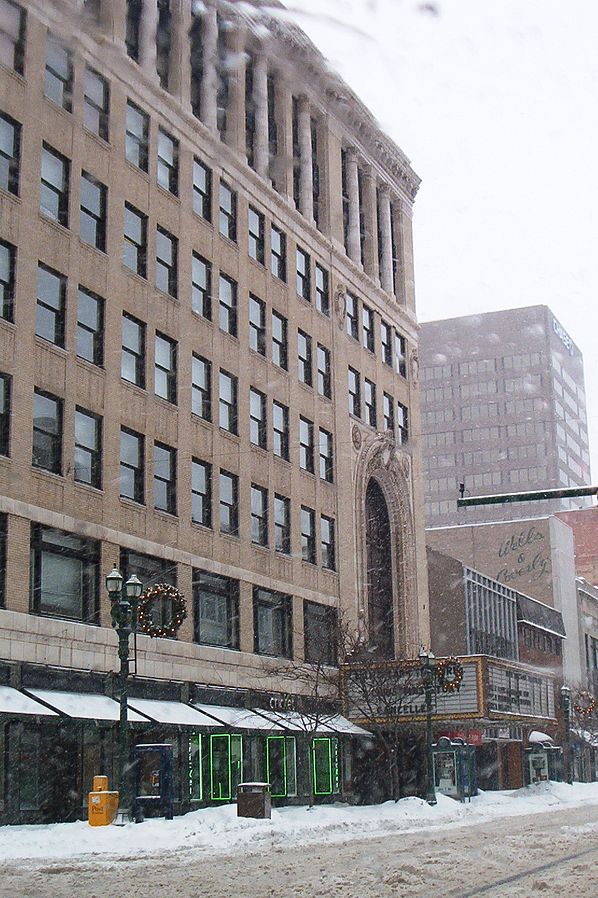 Entryway to the theater. 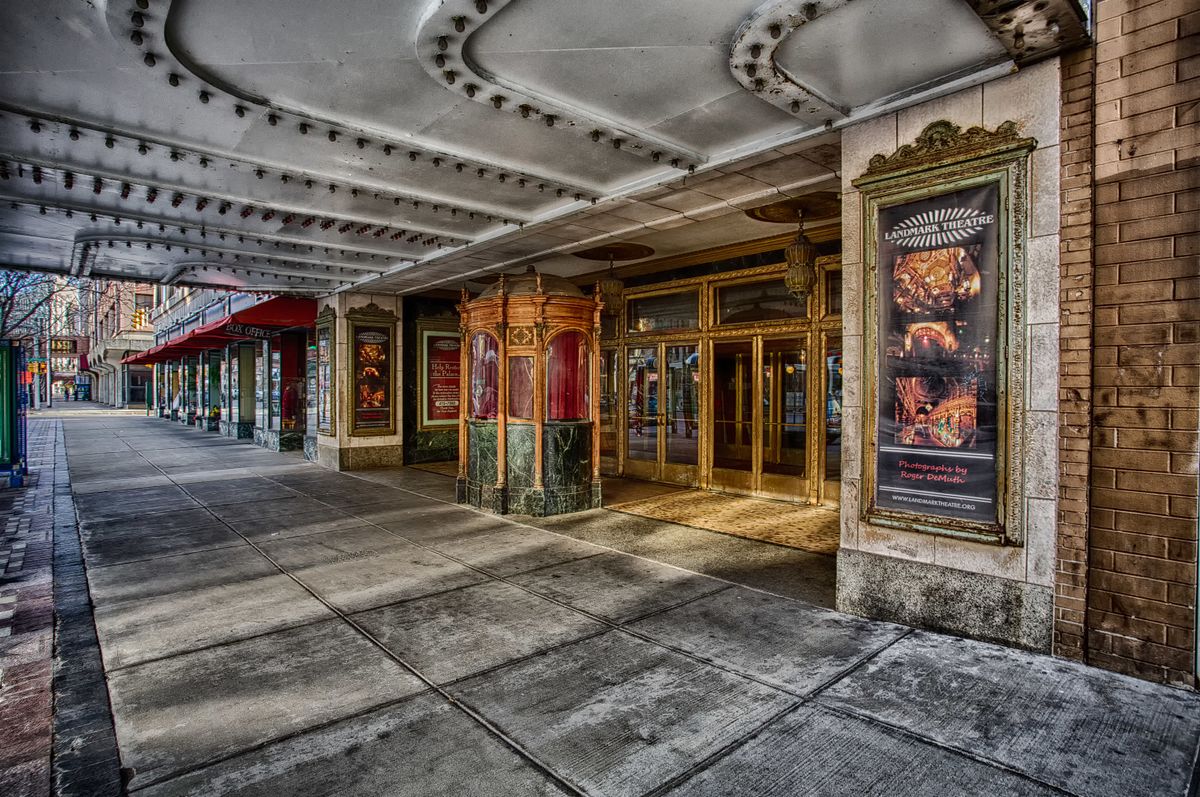 The ornate lobby of the theater. 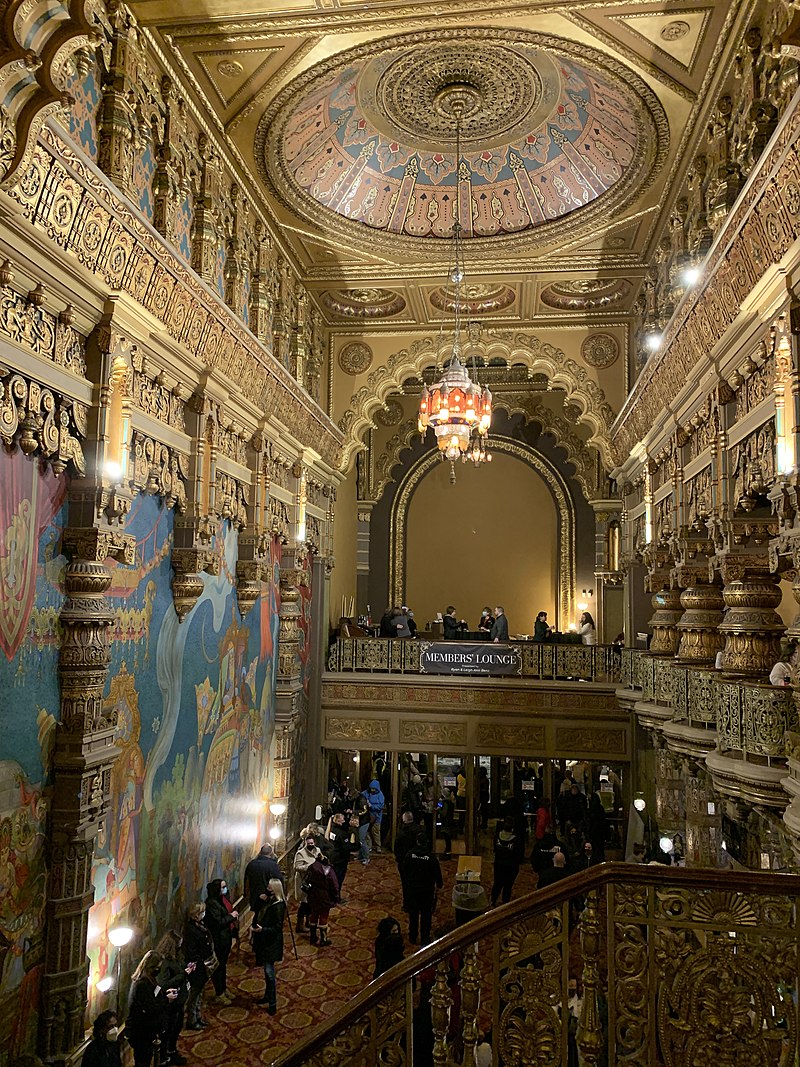 A view of the stage inside the theater. 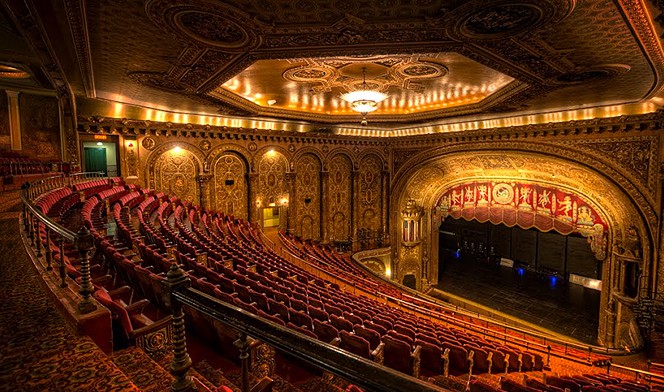 A view from the stage. 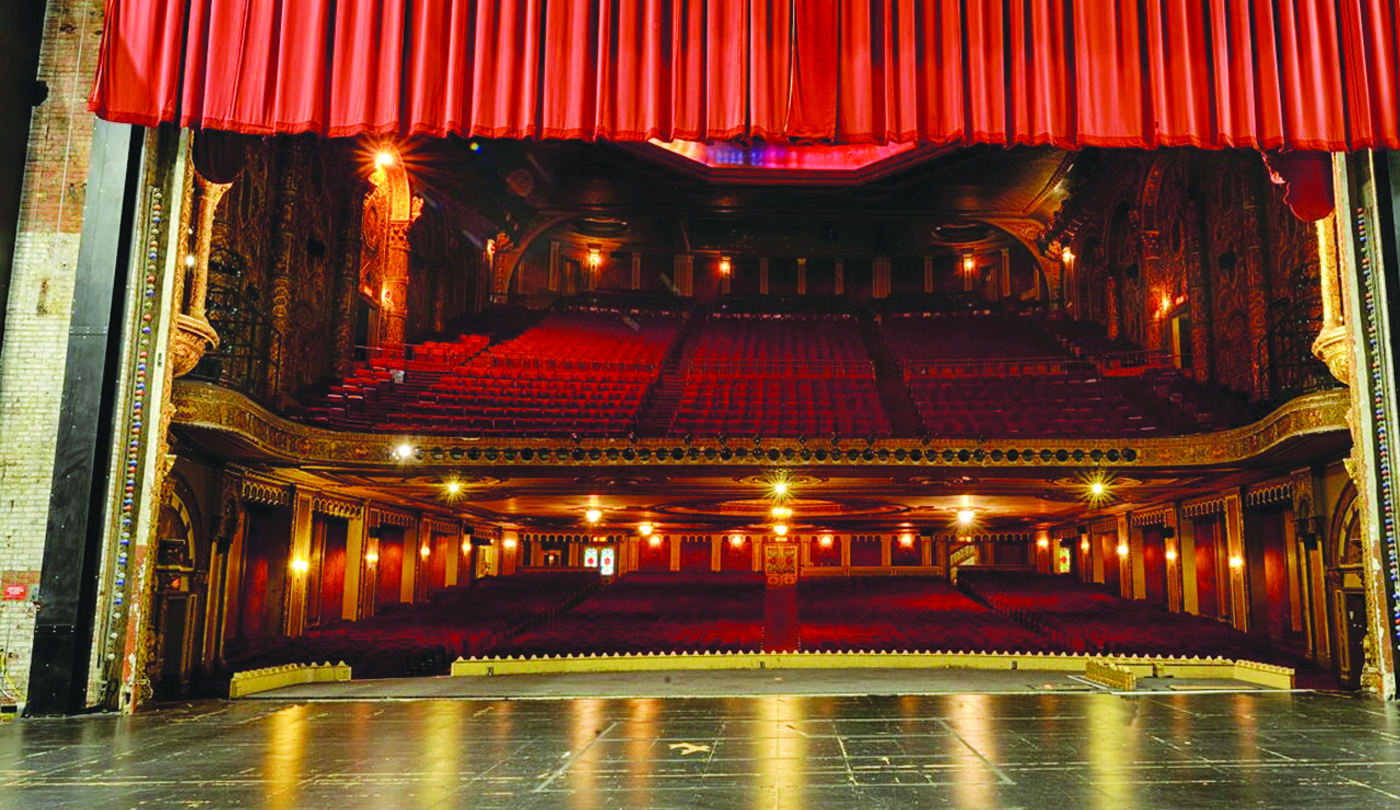 The theater in 1930, when it was Loew's State Theatre. 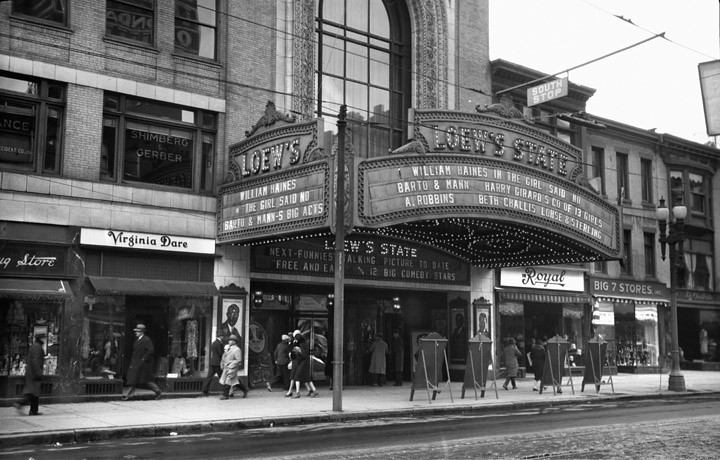 The theater as it looked around 1950. 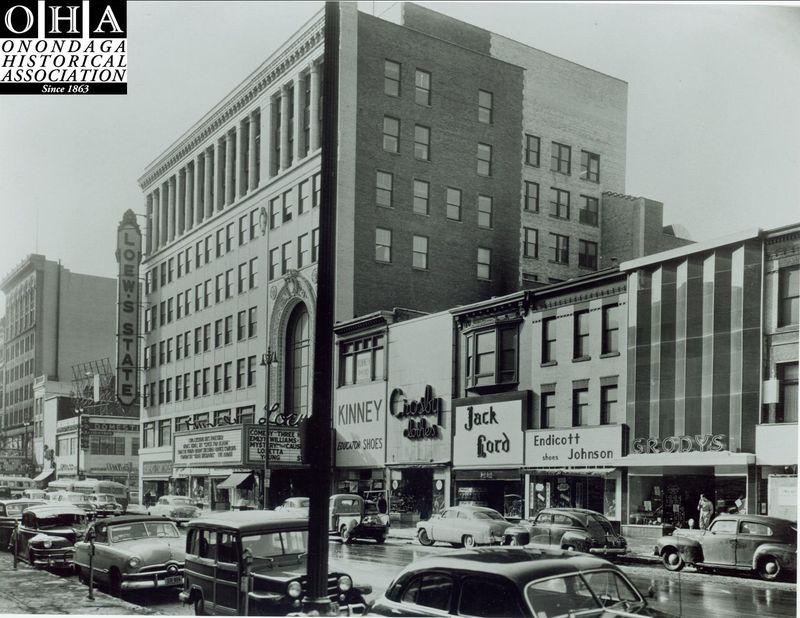 An advertisement for the theater's opening on February 18, 1928 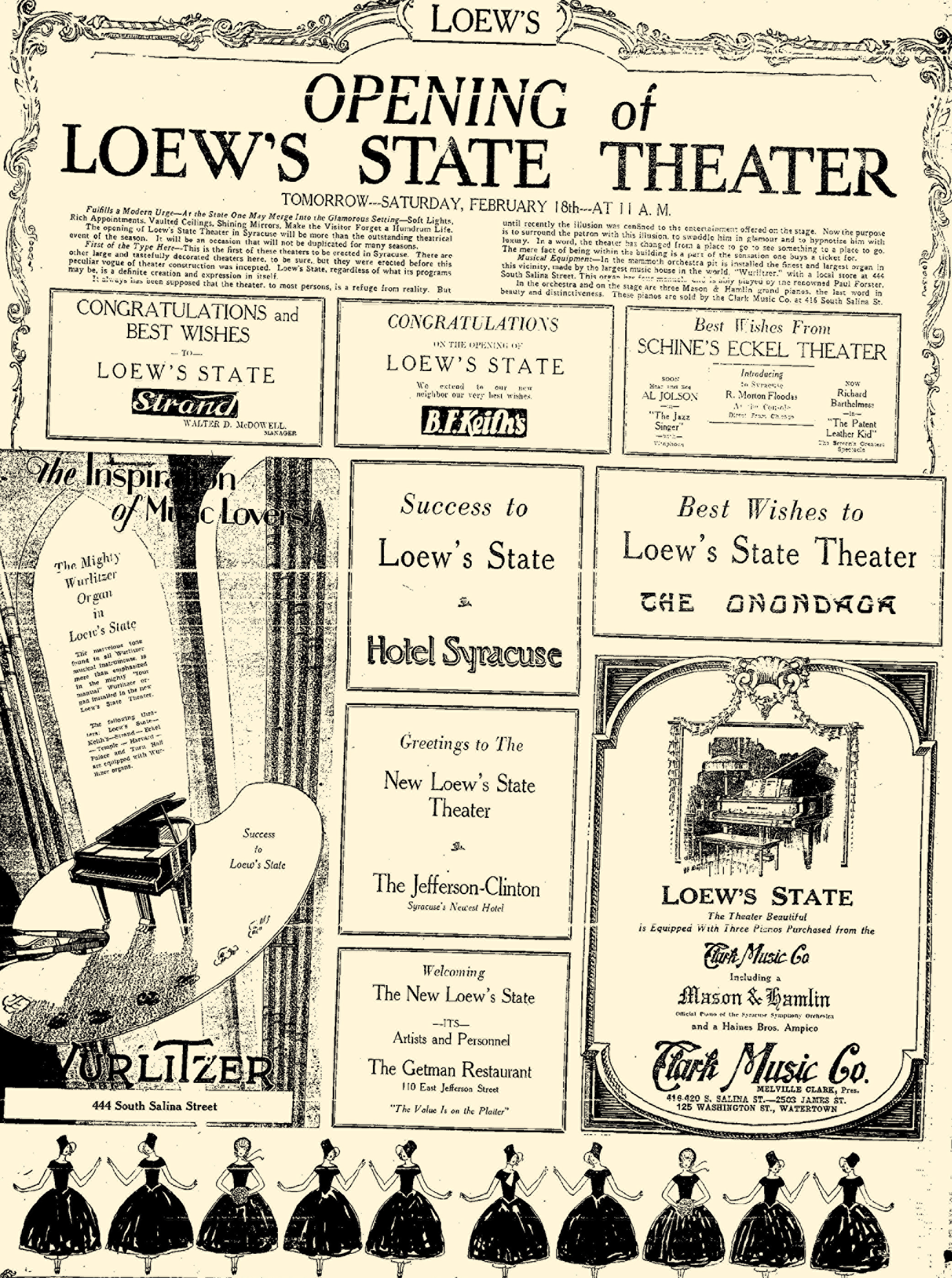 By the late 1920s, grand “movie palaces” had become major attractions in many American cities. The theater chain Loew’s Inc. had already built more than 100 movie palaces across the nation by 1927, when its founder, Marcus Loew, turned his sights on Syracuse. At the time, Syracuse itself was already host to five movie theaters –the Empire, the Strand, the Temple, Keith’s, and Eckel – but Loew made sure his would be the crown jewel.

After spending $1.9 million to purchase the land at the northwest corner of Salina Street, which had previously been the site of the Jefferson Hotel, Loew hired the architect Thomas Lamb to design the building. Lamb was perhaps the most well-known architect of movie theaters during the heyday of the movie palaces, and he would eventually design over 300 theaters throughout his prolific career. Construction began on March 15, 1927, and lasted 11 months, costing $1.4 million and employing more than 300 workers.

For Loew’s State Theatre, Lamb transitioned away from his earlier Adamesque style and embraced a more fantastical vision. While the eight-story stone exterior was relatively unadorned, the interior was the complete opposite. Hanging in the lobby was a chandelier that Loew bought for $40,000, originally designed by Louis Tiffany in 1882. The lobby also featured a Musician’s Gallery, from which quartets would perform during intermission. Upstairs led to a Japanese pagoda fountain with a fishpond, and rooms for smoking and cosmetics provided spaces for men and women to relax. As with many of the era’s movie palaces, the interior style drew from Asian and Middle Eastern motifs, with images of animals and mythological figures ornamenting the red and gold interior. The performance area was also elaborately constructed. It featured a full proscenium, fireproof stage, a 1,400 pipe Wurlitzer organ, and an orchestra pit that could be raised and lowered while accommodating a full symphony orchestra.

The theater was advertised as an attraction in its own right, and people lined the block for its opening on February 18, 1928. The featured entertainment that evening was the silent film West Point and the stage play Milady’s Fan. The theater’s first “talkie,” The Broadway Melody, was screened the following year, and double features were introduced in 1934. While stage shows and vaudeville acts were common in the theater’s early years, they disappeared during the 1930s, as cinema came to dominate the entertainment world.

Loew’s State Theatre prospered during Hollywood’s Golden Age, and it often reflected the times. During the Great Depression, the theater’s extravagant adornments, along with the movies on screen, offered audience members a respite from their own harsh realities. After the United States joined the Allies in World War II, the State Theatre featured veterans on stage, held war bond sales, and screened newsreels of battles in Europe and the Pacific.

Like many of the country’s other downtown movie palaces, however, the State Theatre began to decline shortly after the war, with ticket sales peaking in 1947. This was due to general trends like the rise of television and increasing suburbanization, and the State Theatre faced additional challenges with staffing shortages, maintenance issues, and increased taxes. By 1967, it was slated to be closed and demolished, seemingly doomed to the fate of the neighboring theaters in downtown Syracuse. However, in an effort to keep it open, the city agreed to reduce the theater’s taxes, and it was able to hobble along for the next eight years. When the theater announced its closing again in 1975, community leaders worked together to save it. After forming the group Save Area Landmark Theater (SALT), the theater reopened, but the new organization was now faced with the task of raising $65,000. They were able to accomplish this with a sold-out benefit concert featuring Harry Chapin in 1977, along with grants from the State Office of Parks and Recreation and the National Endowment for the Arts.

Loew’s State Theater was renamed the Landmark Theatre, and was added to the National Register of Historic Places in 1977. Since then, it has hosted many famous musicians and touring Broadway musicals. It renovated its stage area in 2011, and is currently planning to revamp the seating area in order to make it more accommodating for people in wheelchairs. Due to the efforts of SALT, which has officially owned the theater since 1979, the Landmark Theatre is one of the oldest surviving theaters in Syracuse.