The Parishville Museum preserves and collects artifacts related to the town's history. It is located in a historic home built in around 1850 by Civil War veteran Nathan Bartlett. Interesting artifacts on display are hand-carved circus miniatures made by local resident Everett Frederick, and a 1970s marching bass drum of the Parishville-Hopkinton marching band.

The Parishville Museum was built in 1850 by Nathan Bartlett, who worked as a lawyer and enlisted in the army during the Civil War. 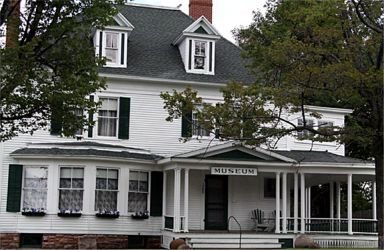 Nathan Bartlett returned home semi-invalid from exposure to the weather and disease so he was not able to do manual work. But he became a lawyer and was admitted to the bar in 1850. He married Jennie Cook and they had a son and daughter. The son became a Baptist minister. Nathan passed away in 1897, prompting Jennie and the children to move to Potsdam. She sold the home a year later to Pliny Clark, who remodeled it and moved in with his wife, Eva, in 1900.

July and August: Tuesday and Thursday, 1pm to 3pm; otherwise by appointment