The Smallpox Hospital was constructed during the 1850s to house and treat smallpox sufferers. Designed by James Renwick Jr. in the Gothic Revival style, the building opened on December 18, 1856 and operated until 1886. Its island location was accessible by ferry, but also allowed contagious patients to be quarantined. In the 1900s, the building was used as nurses' quarters and as the Maternity and Charity Hospital Training School. The building is now a ruin. 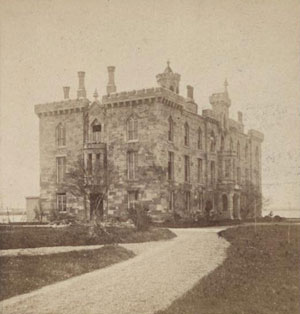 The Island
The Smallpox Hospital is located on an island that has undergone several name changes over the centuries. Its earliest known name is Minnehanonck (from its Lenape inhabitants, possibly translated as "Long Island" or "It’s nice to be on the island"). In the 17th century, the Dutch called it Varken Eylandt  ("Hog's Island"). At the time of the Smallpox Hospital's construction, the island was named for the Blackwell family, which had farmed the island for decades. In 1921, it was renamed Welfare Island because it hosted a number of healthcare buildings, including an asylum and a charity hospital, as well as a prison. Since the 1970s, the island has been known as Roosevelt Island.

The Hospital
Even though smallpox vaccination became increasingly common during the latter half of the 19th century, smallpox remained a deadly, contagious, and fairly common disease. New immigrants and Civil War soldiers were especially afflicted. The hospital accepted both paying patients and those requiring free care (in contrast, the other medical institutions on the island were solely designated for charity cases). Paying patients had private rooms on the upper floors, while charity patients occupied wards on the lower floors. There was room for around 100 patients total. In 1886, patients were moved to the new Riverside Hospital on North Brothers Island. The building was then used to house nurses and provide training for the nearby Charity Hospital (later City Hospital). When this hospital was also relocated in the 1950s, the building was abandoned.

Today, the site is abandoned. A 1976 report from the Landmarks Preservation Commission comments on its picturesque qualities: "The Smallpox Hospital could easily become the American equivalent of the great Gothic ruins of England, such as the late 13th century Tintern Abbey in Monmouthshire, which has been admired and cherished since the late 18th century as a romantic ruin" (p. 2).