This house was built c. 1868 as the home of Norman Dennis, a laborer and mason involved in founding the first African-American lodge of the Odd Fellows in Elmira, New York. His daughter Lula (1859-1928) married Edward Newton (c. 1856-1932), who worked at Cornell University's Psi Upsilon fraternity house. At the time, Cornell's black students had no designated place to gather for studying and socializing. In 1905, the Newtons filled this need by hosting a group of African American Cornell students in their house. This group would become the Alpha Phi Alpha fraternity only a year later--one of the country's first black fraternities. The house belonged to members of the Newton family until 1982 and now belongs to a private owner. 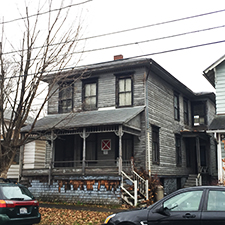 Alpha Phi Alpha regards the house as its birthplace and credits the Newtons with providing crucial support to African American students at Cornell.