Carrillo School was founded in 1930 and is today a K-5 magnet elementary school. It is named after Leopoldo Carillo, the former owner of the land on which the school stands. The school was constructed in 1930 despite the Great Depression which was wreaking havoc on the country at the time. Before the school was built, the property was park with gardens and recreational facilities, including a pool. Interestingly, it was also where the first plane landed in Tucson and Theodore Roosevelt gave a speech here. The school has expanded over years reaching its present size. The school is known for starting a tradition called Las Posadas, which is a nativity pageant held during the Christmas season.

Carrillo School was built in 1930 and named after Leopoldo Carrillo, the former owner of the property. 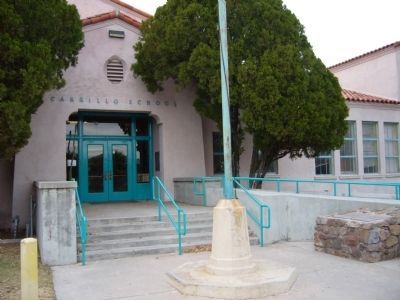 This historical marker is located on stone monument in front of the entrance. 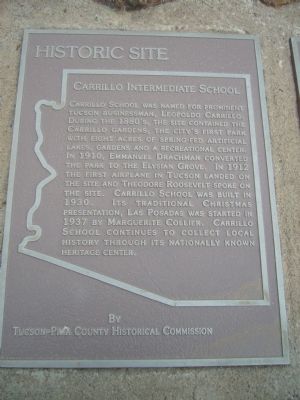 Leopoldo Carillo was born in Montezuma, Mexico in 1839 and made his way to Tucson in 1859, working as a freighter for the U.S. government. He became wealthy in this venture and as a result started to invest in property, ranching and mining. He was also among the group that helped establish the school system in 1867, and served as a councilman as well. He died in 1890.