Built sometime in the 1870s, the Carlos Ygnacio Velasco House is significant for its namesake and architecture. In terms of the latter, it is a good example of 19th architecture. As for the former, the house is one of a few structures in Tucson remaining once owned by prominent Mexican-Americans in the territorial period. The building was added to the National Register of Historic Places in 1974. A historical marker is located just inside a metal gate on Stone Avenue, though the English marker is missing.

The Carlos Ygnacio Velasco House was built in the 1870s. (Photos: Wikimedia Commons)

The historical marker, without the English sign, inside the metal gate. (Bill Kirchner, The Historical Marker Database) 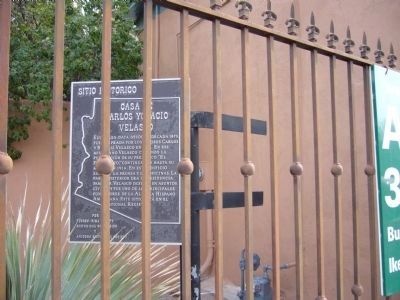 Carlos Ygnacio Velasco was born in Hermosillo, Sonora (Mexico) in 1837 to a prominent family. He studied law and worked as a judge in Sonora before coming to Tucson in 1865. He changed careers and began working as a merchant.

He bought the house in 1878 and by that time decided to change his work again, this time becoming a newspaper publisher. He published "El Fronterito," the first Spanish-language newspaper in the state and continued this until his death in 1914.

Velasco was an important civic figure and was a founder of the Alianza Hispano Americana, a national fraternal insurance society. After his death, the building was abandoned and neglected. Three men bought and eventually converted it to apartments. It is not clear what the status of the building is today.