Located in Armory Park, this marker describes the background of Camp Lowell, which was first established here in 1866. It was moved to its current location and called Fort Lowell (this is now an outdoor museum featuring the ruins of the long abandoned fort) in 1873. Locals very much disliked the rowdy behavior of the soldiers and as a result the camp was moved that year. The army established the camp to help protect the town and souther Arizona from Apache attacks, as well as to supply other outposts south of the Gila River. The influx of soldiers also brought an economic boost to the town. The park also features three memorial monuments: one for the Mormon Battalion, another for Spanish War Veterans, and the third commemorates those who served in World War I.

The Camp Lowell historical marker is in the foreground. In the background is the Spanish War Veterans Monument. 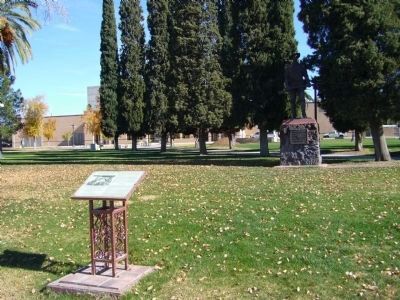