Calvin Fletcher (February 4, 1798 – May 26, 1866) was an attorney, banker, farmer, landowner, and state legislator from Indianapolis, Indiana, United States. In 1821 Fletcher moved from Vermont to the new settlement of Indianapolis, where he made his financial fortune. In addition to his business interests, Fletcher was involved in Indianapolis's community affairs, especially educational and civic development, and valued education, religious faith, hard work, and community service. With his friend and fellow abolitionist, Ovid Butler, Sr., they helped recruit and fund the 28th Regiment of United States Colored Troops (USCT) during the Civil War. The 28th USCT were trained in a camp named in Fletcher's honor. Fletcher's multi-volume diary, published as The Diary of Calvin Fletcher in nine volumes by the Indiana Historical Society between 1972 and 1983 describes a wide range of topics as well as his personal interests, acquaintances, and community activities. This marker is located within Indianapolis's Fletcher Place neighborhood, of which used to be where the Fletcher farm, "Wood Lawn," was located.

Front side of historic marker 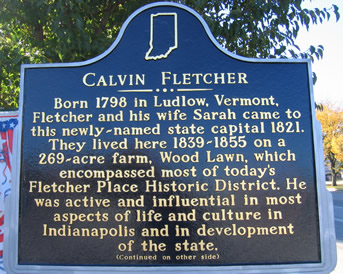 Back side of marker 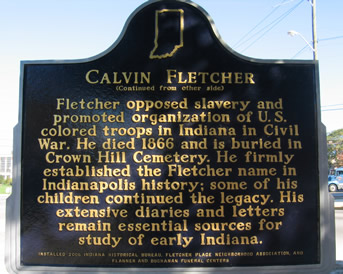 House built in 1895 for Fletcher's grandson, Calvin I. Fletcher (III), in Indianapolis 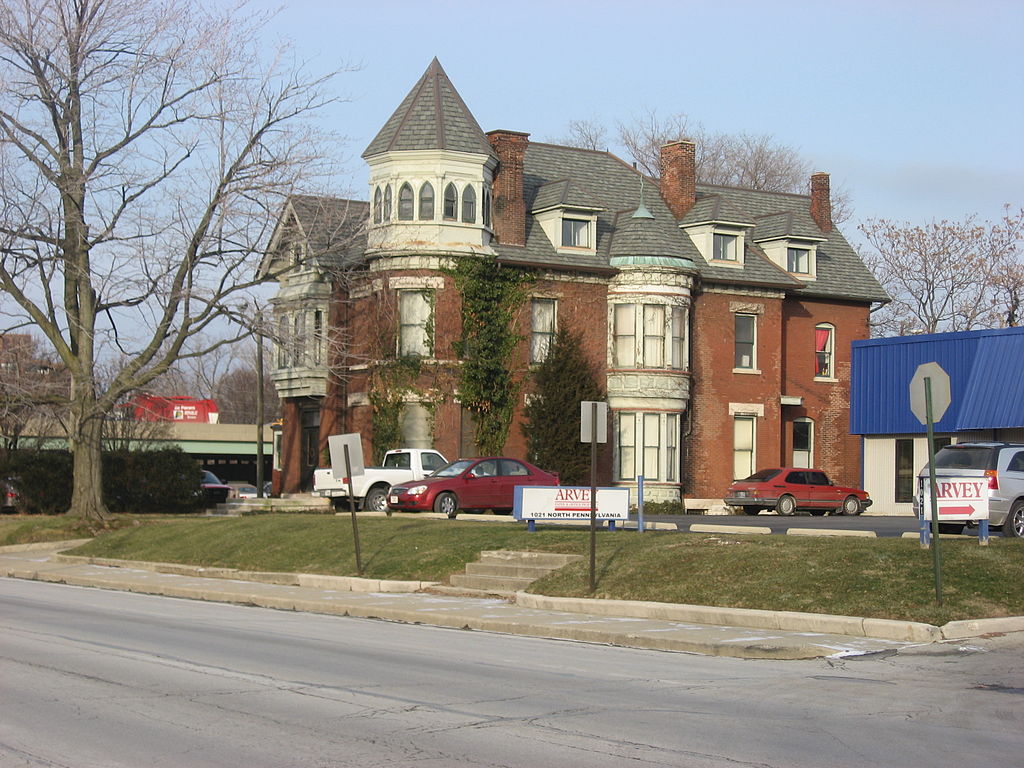 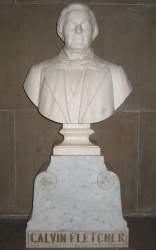 1856 daguerreotype of Calvin and Keziah Fletcher 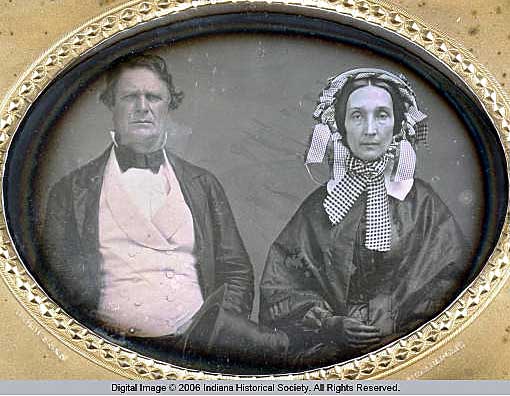 Circa 1840s-1860s photo of Fletcher. Courtesy of Indiana Historical Society. 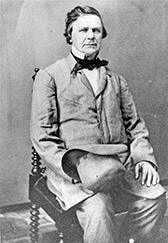 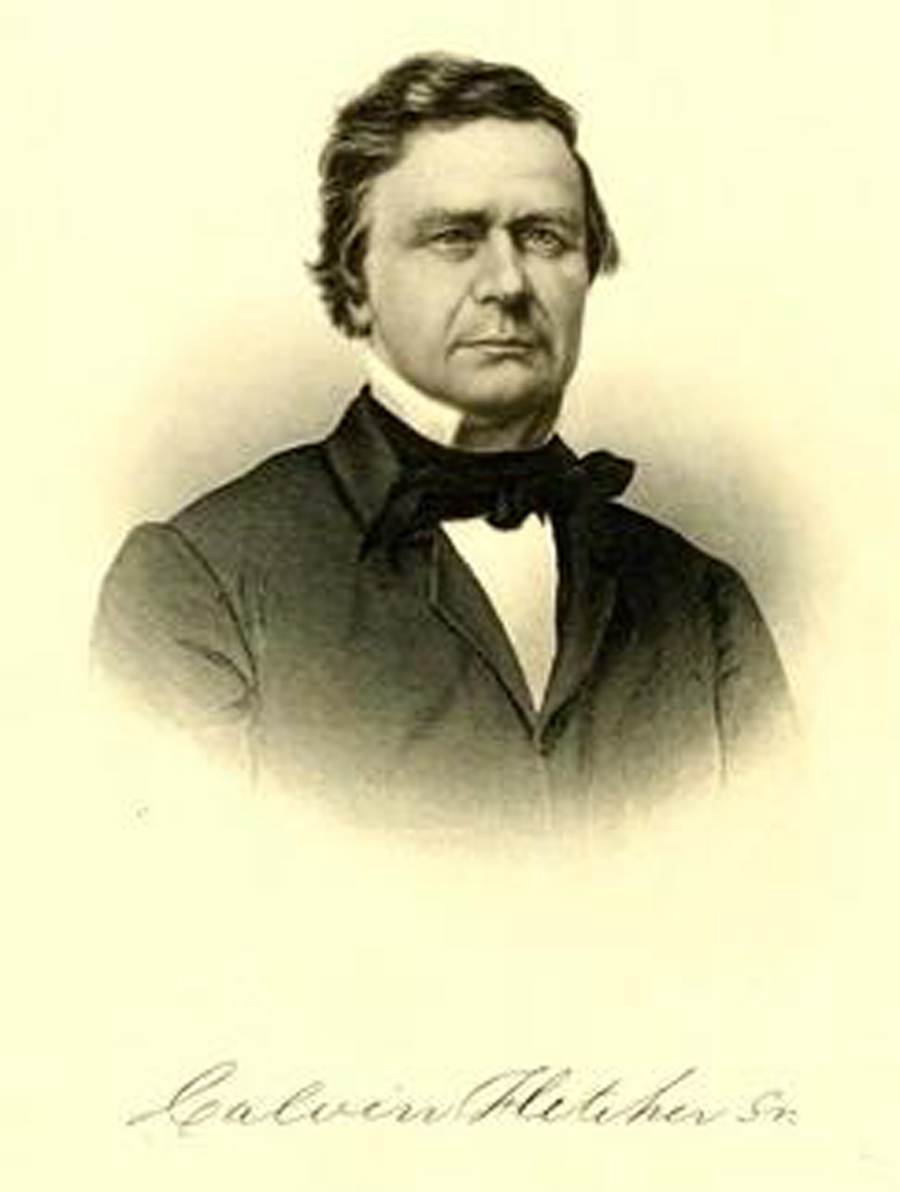 Fletcher was born on February 4, 1798, in Ludlow, Vermont, the eleventh child of Jesse and Lucy Keyes Fletcher's fifteen children. Fletcher’s father, a poor man with a large family to support, still managed to provide his children with a basic education. Young Fletcher attended local schools until the age of sixteen and worked on the family farm. With his father’s permission, Fletcher left home in 1815 at the age of seventeen. Fletcher went to Windsor on the Connecticut River, where he worked on several local farms before moving to Royalton and later to Randolph, Vermont, to attend school and work. Fletcher returned home for a brief time then moved to Westford, Massachusetts, to attend school.

In 1817, after completing his education at Westford, Fletcher once again set out on his own.  With no particular destination in mind, Fletcher traveled south through Connecticut to New York City and Philadelphia, then west through Pennsylvania to Wheeling. Fletcher ended up in Urbana, Ohio, in 1817, where he taught school, studied law under James Cooley, and was admitted to the Ohio bar in 1820.

On November 4, 1855, Fletcher married Keziah Price Lister from Hallowell, Maine, who had come to Indianapolis in 1851 to become a public school teacher. Lister, whose first husband had deserted her and moved to Texas, obtained a divorce and then married Fletcher. In 1855 Fletcher moved his children and second wife into the Alfred Harrison home on North Pennsylvania Street in Indianapolis, leaving the Wood Lawn house to his son, Miles, and his family.

Fletcher began his law practice in Urbana, Ohio, and was the first attorney practicing law in Indianapolis. He was a prosecuting attorney for the Marion County Circuit Court in 1822 and 1823 and a prosecuting attorney for the Fifth Circuit Court in 1825 and 1826. Fletcher went on to join a law firm with Ovid Butler, Simon Yandes, and Horatio C. Newcomb. On December 26, 1846, Fletcher and Butler dissolved their law practice and collection business, but Fletcher continued to devote time to his farming operations and banking interests.

In 1844 Fletcher helped organize the State Bank of Indiana, where he acted as the Indianapolis branch's director from 1841 to 1844 and as branch president from 1843 to 1858.[15][18] He remained active in banking for the rest of his life. In 1857 Fletcher was an organizer of the Indianapolis Branch Banking Company. In 1863 he joined his son, Stoughton, his brother, Stoughton, and fellow bankers Thomas H. Sharpe and Francis M. Churchman in organizing the Indianapolis National Bank, which was the second national bank in Indianapolis.

Fletcher was a stockholder in the Indianapolis and Bellefontaine Railroad (later called the Indianapolis, Pittsburgh and Cleveland Railroad) as well as a board member, and served briefly as its board president in 1855. Shortly before his death, Fletcher made a public appearance in support of a proposed Indianapolis-Vincennes railroad.

From 1839 to 1855 Calvin Fletcher owned a 269-acre farm called Wood Lawn in the early settlement of what would become known as Fletcher Place. After Fletcher sold his part of the farm at Wood Lawn, his son, Stoughton, divided it into lots and developed into a residential area. The settlement had several residents who made "many contributions were made to the early development of architecture, religion, commerce, education, and social life in the city of early Indianapolis." By 1852 Fletcher’s farms adjacent to Indianapolis’s northeast side increased to approximately 1,400-acre. He also owned other farms in Marion County and in Morgan County, Indiana.

Fletcher supported agricultural development and helped organize Indiana’s first agricultural fairs in the county and state. In addition, Fletcher was a founder of the State Horticultural Society. He also helped to found the Marion County Agricultural Society and was elected its president in 1851.

Fletcher was an abolitionist like his friend and colleague, Ovid Butler. In 1852 Fletcher’s long-standing interest in colonization led him to support a State Board of Colonization that would provide state funds to assist Blacks living in Indiana to establish a colony in Africa. In addition, Fletcher and his family contributed to and participated in the American Civil War. Three of Fletcher’s sons served in the Union army. He also supported the organization of the U.S. colored troops in Indiana during the war and the 28th Regiment U.S. Colored Troops used his farm land to train between December 1863 and April 1864. During the war, Fletcher helped provide aid for soldiers’ families, assisted local efforts to welcome returning soldiers home, and served on the city’s Sanitation Committee. At the request of Indiana governor Oliver P. Morton, Fletcher purchased arms for Indiana’s regiments. After the war, Fletcher contributed to the Freedman’s Aid Society.

Fletcher assisted the Indianapolis Benevolent Society, a local organization that helped the city’s poor, serving for years as its secretary. He was also interested in the efforts of the Widows and Orphans Society and active in the temperance movement.

Fletcher was known as a very religious man. He joined the Methodist Church in 1829 and provided financial support to assist other denominations build their own churches. Fletcher served as superintendent of Sunday Schools at Asbury Chapel and Roberts Chapel, helped establish these Methodist congregations in Indianapolis, and also attended Wesley Chapel on the Circle. He contributed to the erection of almost all the early churches in Indianapolis. The Fletcher Place United Methodist Church was built on the on a portion of the farm, after the land had been donated to the church. Fletcher helped acquire property to establish Crown Hill Cemetery, a new burial ground at Indianapolis, and organized the nonprofit corporation to operate it.

Fletcher had a longtime interest in history. He was a member of the New England Historical and Genealogical Society and one of the original members of the Indiana Historical Society, founded in 1830. Fletcher's diary, donated to the IHS by his family in the 1920s, is in the IHS collections and provides “a powerful contribution” to understanding life in “the early nineteenth-century Midwest.

Fletcher died on May 26, 1866, after a brief illness and complications from injuries he suffered when he was thrown from his horse two months earlier. Fletcher was buried at Crown Hill Cemetery in Indianapolis. Keziah Fletcher sold the Fletcher home on Pennsylvania Street after her husband’s death, left Indianapolis, and returned to the East Coast, where she died in Boston on June 10, 1899. Several of the Fletcher children went on to have successful careers of their own.

A marble bust of Calvin Fletcher is on display in the Indiana Statehouse.

1. Fusion Party is a name for multiple political parties in United States history. The different parties that used the name don't share any particular political positions; instead, confederations of people from disparate political backgrounds united around a common cause individual to their situation—often opposition to a common enemy—and used the name Fusion Party to reflect the aggregate nature of their new party.

Brand, Carl Fremont. "The History of the Know Nothing Party In Indiana" (Article). Indiana Magazine of History Indiana Magazine of History, Volume 18, Issue 1. pp. 47–81. Retrieved 15 April 2016. In Indiana as elsewhere there was a movement for a Fusion or People's party. The Know Nothings, perhaps the strongest of all the elements of the opposition but not strong enough to run a ticket of their own, determined to act with the Fusionists, to control the whole movement and to direct it in their own interests

Geib, George, "The Diary of Calvin Fletcher and the Historians," Traces of Indiana and Midwestern History 10(1):22.