The International Bluegrass Music Museum is the world’s only facility dedicated to the history and preservation of the international history of bluegrass music. Bluegrass is the official State Music of Kentucky, and Bill Monroe’s “Blue Moon of Kentucky” shares with Stephen Foster’s “My Old Kentucky Home” the honorable distinction of being the official Kentucky State Songs. The infectiously energetic style of dance that grew up around bluegrass and old time music is clogging, the official Kentucky State Dance. This museum, established to preserve the history of the music Mr. Monroe created, is located 30 minutes from the little town of Rosine, Kentucky, and Jerusalem Ridge, the homeplace where he was born and grew to manhood, and where he and members of his family now rest in peace. The International Bluegrass Music Association was founded in Owensboro, Kentucky in 1986. While the IBMA relocated to Nashville years ago, Owensboro has been the home of the Hall of Fame since 1991. The museum was incorporated in 1991 and opened year-round in 1995. In 2002 it re-opened after expanding. In 2018, the Bluegrass Music Hall of Fame & Museum opened a new $15 million facility in downtown Owensboro, Kentucky on the banks of the Ohio River. 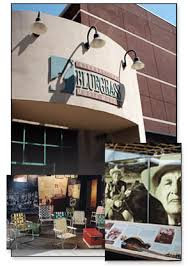 The International Bluegrass Music Museum is located in the RiverPark Complex at the foot of “the blue bridge” in downtown Owensboro, Kentucky. As you draw near, you’ll hear the sounds of bluegrass music emanating from the museum’s radio station, RBI, with audio speakers taking the music to the streets. Only a few hundred feet from the museum’s entrance, the sound of music drifts downstream via the mighty Ohio River, the subject of more than a few memorable bluegrass songs.

In the late 1930s, Bill Monroe took the stage with what became known as his signature high lonesome sound.

He and his band, “The Blue Grass Boys,” forged a mighty confluence of sound… including Appalachian mountain music, rural “old time” string playing, folk ballads, blues, African stomp, and black and white gospel to introduce a new style of music which became known as bluegrass in the 1950s. It took its name from fans referring to Mr. Monroe’s band; Bill,in turn, named his band for his home state of Kentucky, known as “The Bluegrass State.” Once–and still–known as the bluegrass state for the gorgeous horse farms planted in bluegrass that occupy many thousands of acres in the central part of the state, Kentucky is now known as the bluegrass state just as commonly for this, the indigenous music of its people.

While popular since the 1940s, bluegrass enjoyed an immense resurgence with the release of the movie, “O Brother, Where Art Thou?” in the year 2000.1http://bluegrassmuseum.org/about-bluegrass-museum/