The Marine Corps base at Quantico, Virginia remains one of the most well known in the United States. Starting with the settlement of the Quantico Company in the 19th century, the first Marine Corps barracks was established in 1917 during World War I. After 1920, operations in the area expanded to create the schools that would become the Marine Corps University in 1989. Today, the Marine Corps Base Quantico Historic District encompasses 239 contributing buildings, sites and objects and 188 non-contributing. It was added to the National Register of Historic Places in 2001.

Entrance to the Marine Corp Base Quantico 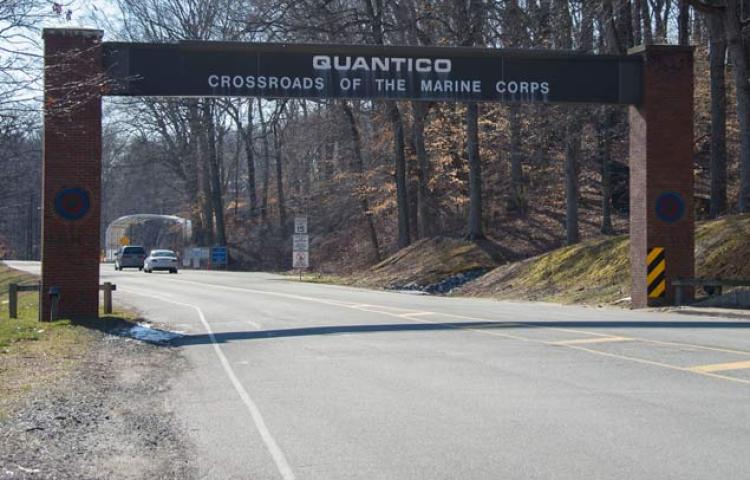 The town of Quantico was settled by the Quantico Company following the Civil War, near the position formerly held by the Confederate forces blockading the Potomac River from September 1861 to March 1862. Though it was originally established as a vacation spot, Quantico ended up making most of its money through its shipyards, producing ships for the US Navy prior to World War I. This focus on the Navy would be one of the reasons why the Marine Corps set up their base there.

The first barracks of what would become Marine Corp Base Quantico would be built in 1917, occupied by 91 enlisted men and 4 officers. This would be expanded into a series of schools after 1920 that would be consolidated into the Marine Corps University in 1989. Quantico would be the first to house the Corps' first aircraft wing and first helicopter squadron, the latter of which still serves as the President's rapid transportation (Marine One).

The Marine Corps Base Quantico Historic District contains 239 contributing buildings, sites, and objects and 188 non-contributing, over approximately 55,148 acres. While the majority of the contents of the base are related to the Marine Corps, other organizations make use of the facilities, including, but not limited, to the Federal Bureau of Investigation, the Naval Criminal Investigative Service, and the Defense Intelligence Agency. The historic district was added to the National Register of Historic Places in 2001.