The Jackson Ferry Shot Tower was constructed by Thomas Jackson, with work beginning just after the American Revolution and ending in 1807. Today, it is one of the only shot towers still standing in the United States. It is unique for both its shorter height and the materials used to build it. Currently, the shot tower is the center of a state park and was added to the National Register of Historic Places in 1969. 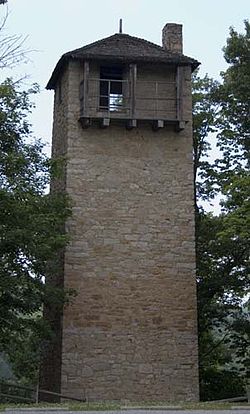 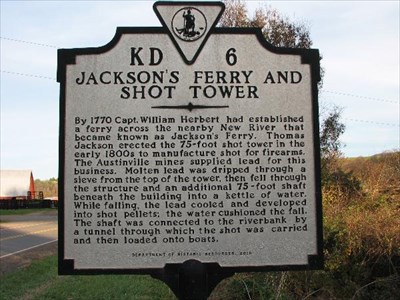 Shot Towers were so named because they were used to produce the lead balls shot from firearms at the time. After melting the lead at the top of the tower, the metal would be poured down through sieves to produce balls of varying sizes as required. From there, they would free-fall for most of the height of the tower, typically 150 feet. This drop partially cooled the metal before it hit a kettle of water at the bottom.

Completed in 1807, the Jackson Ferry Shot Tower is unique for several reasons. The typical shot tower was usually close to 150 feet tall and made out of brick. The Jackson Ferry tower only stands 75 feet above ground and is built out of limestone. The first was accomplished by building on a hill, allowing the builders to dig 75 feet underground to create a "basement." The second enabled the tower to keep a more consistent cool temperature, improving the quality of shot produced by the tower.

Today, the Jackson Ferry Shot Tower stands as one of only three such buildings left in the United States. While none of its products were used in any of the United States' wars, it is a reminder of an industry needed for expansion into the frontier. It is now the center of a state park and was added to the National Register of Historic Places in 1969.