Created in 1862 by an act of Congress, this former US arsenal set up in the city to keep forces in the Union Army armed and with ammunition. The arsenal was used until the end of the Spanish-American War. It remained closed from 1903 to 1912 when the city decided to turn the buildings into a technical school. The school is still in operation today. A marker sits on west edge of the campus, providing information about the buildings's arsenal days. 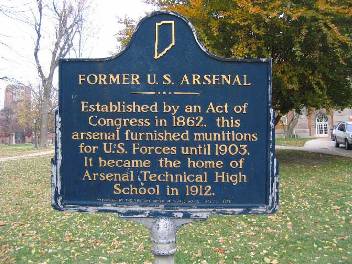 Main building of the US Arsenal in 1916 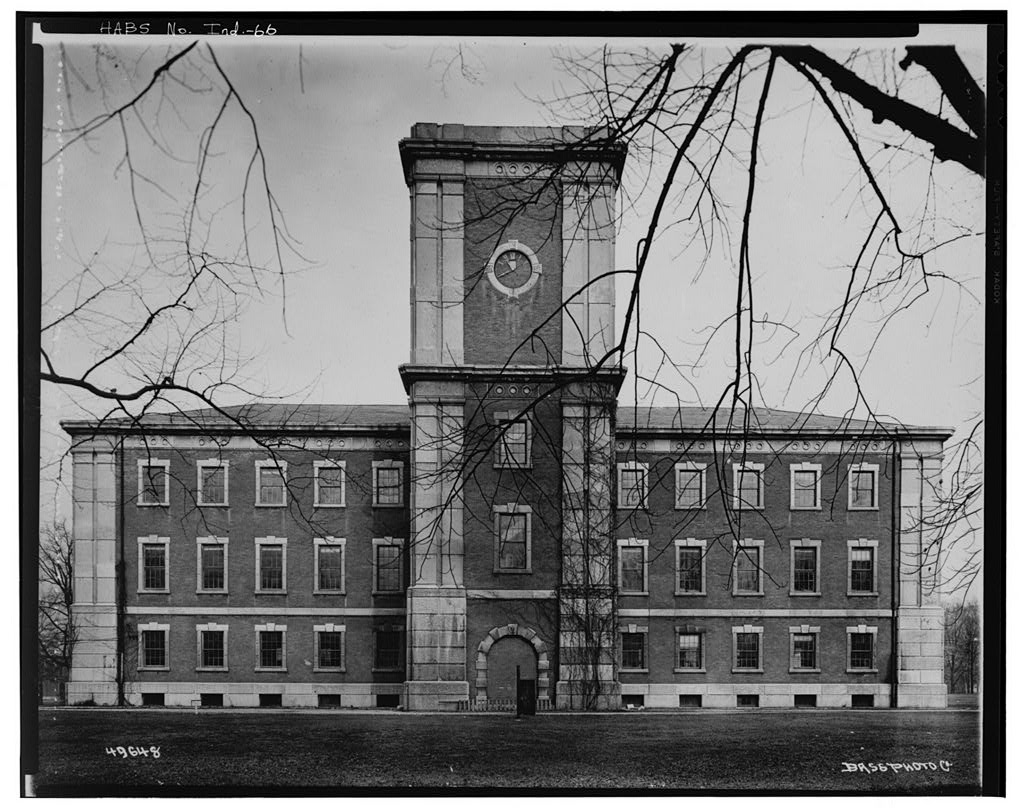 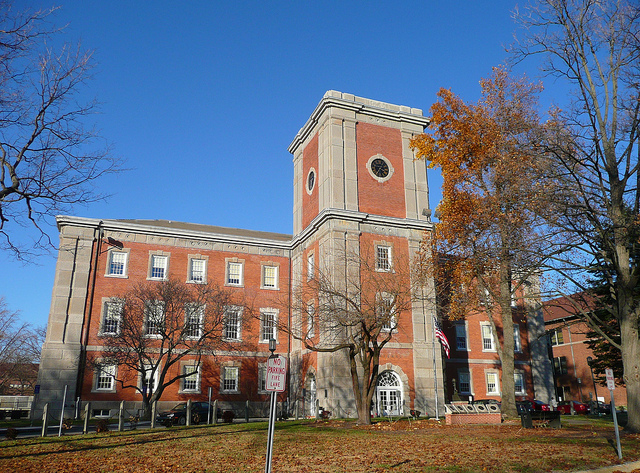 Part of the front facade of Treadwell Hal 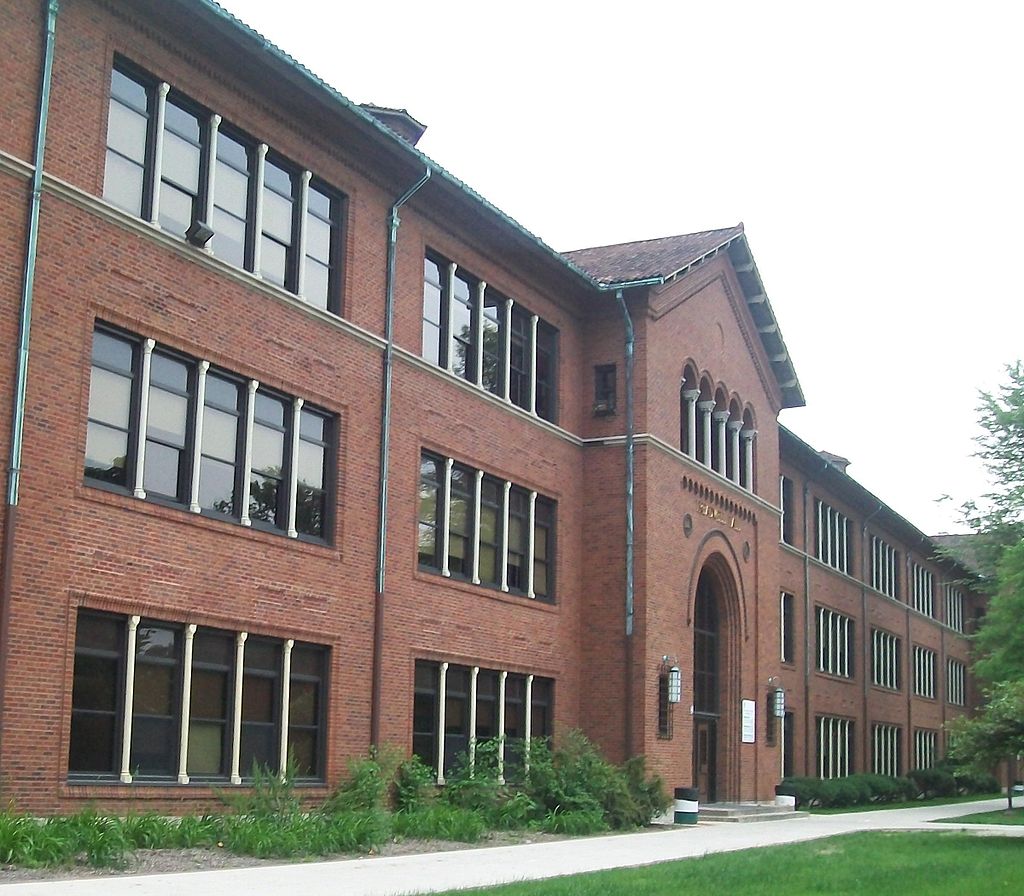 The Stuart Hall bell tower is one of the tallest structures on campus, matched only by the Arsenal. 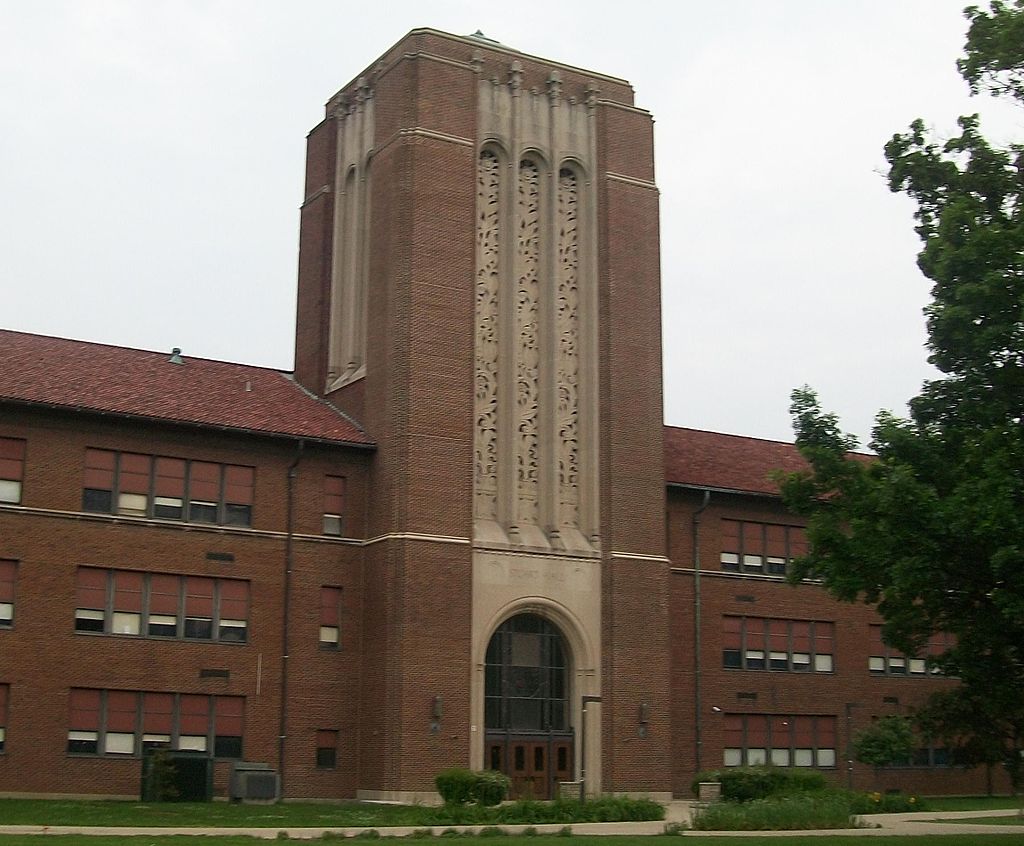 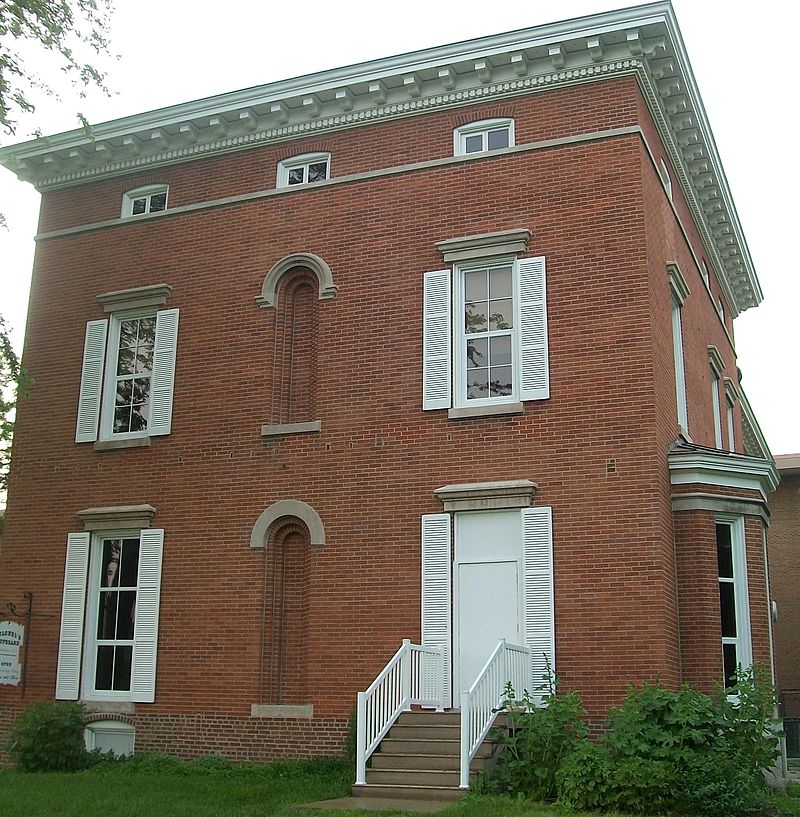 "Tech," as Indianapolis residents call it, did not begin as a school but as a Civil War arsenal. In 1862, Congress passed an act to create a permanent U.S. Army arsenal in Indianapolis. Army planners chose this site in 1863 at present-day 1500 East Michigan Street, because it had close access to downtown Indianapolis but was also far enough outside the city limits that it would not disrupt any neighborhoods. The first soldiers arrived in 1865, and the U.S. Government maintained the arsenal there until 1903, using it to store heavy artillery, lighter arms, and some munitions. After the Spanish–American War, facilities like this were dubbed obsolete for military needs, and by this time, the city had fully encroached on the site.
The iron gate and brick Italianate guard house on Michigan Street date to the 1870s. Soldiers arriving late from a night on the town were detained in basement cells in the guard house. The Arsenal Building was completed in 1865. Its central tower originally served as an elevator. Wagons could pull up under the tower and be hoisted up by a platform. Once in place, rifles, cannon, or other materiel was unloaded at the appropriate floor. The internal floor system was replaced by a pan joist system in 1932. The massive, monumental three-story building with full basement with its soft red-brick exterior and Vernon, Indiana, limestone trim looks very much as it did in the 1860s. The 1867 barracks is one of the earliest remaining buildings on campus. It once housed the detachment of fifty soldiers that staffed the arsenal. The West Residence, 1870, accommodated officers.

On March 27, 1903, the Arsenal grounds were sold at public auction to an Indianapolis public trust to keep the property intact as the site of a school or park. In 1904, the Winona Agricultural and Technical Institute established the Winona Technical Institute at Indianapolis on the site, but was completely insolvent by 1910. At the time, the Indianapolis Public School system was in great need of a third high school. On September 12, 1912, Principal Milo H. Stuart, the principal of Manual Training High School and also the first principal at Tech, opened Arsenal Technical High School on the grounds. Many of the buildings are original to the U.S. Army’s use of the site, while others were added to accommodate the school's functions. For example, a massive shop building, Stuart Hall, and the stadium were added to the campus in the 1920s and 30s.
As part of the 2012 Super Bowl, which was hosted by the city, a community center was placed on campus and a new football field soon will be. This is part of the legacy project put on every year by the Super Bowl host city, with this year's overall project to renew and restore the city's east side. The NFC team's practice field was originally set to be placed on Tech's campus but it is now at the University of Indianapolis after being deemed impractical for the school.

There are three specialized magnet programs on campus, the Math/Science Magnet Academy, the Career Technology Magnet, and New Tech High. There are also four "small schools" which are default and comprise the general population. They are the freshman, sophomore, junior, and senior academies.
The Magnet Academy is a college prep school in which each student focuses on one of six areas of study: math, science, information technology, engineering, computer science, and medicine. In their senior year, students are encouraged to take part-time internships in their specialized area of study. With the highest GQE, PSAT, and SAT scores in any small schools in IPS, almost every senior receives a diploma each year from this school, and 95 percent of the graduating class attends college. Their classes are in the first two floors of Stuart Hall and they wear purple IDs.
The Career Technology Magnet is a vocational school providing students a chance to quickly go into the working world. The Career Technology Magnet encourages freshman to explore various career paths and the career opportunities that pique their interests. By the time these students are juniors they are receiving experience in their chosen career path. Education takes many forms from part-time jobs to internships to mentoring and more. Graduates go on to careers in the work force, the military, or two or four year degree programs. For the most part, classes Morgan Hall and they wear Black IDs.
New Tech High is a project-based learning school in a technology-driven, college prep environment. Using the tools made available from the New Tech Foundation, including the new, web-based PeBl learning system and the NT Grade Portal, students are provided with individual laptops and immersed in high-tech, critical thinking projects. The focus at New Tech High is on success in the real world as well as in the classroom. Students are encouraged to discover, think, collaborate, and lead themselves to a successful future. These classes are held exclusively in Lone Hall and the students wear yellow IDs.

The main administrative building for the campus, it was the original arsenal building constructed in 1864 with its tower added in 1865. Its main central tower originally served as an elevator. Wagons could pull up under the tower and be hoisted up by a platform. Once in place, rifles, cannon, or other materiel was unloaded at the appropriate floor. This massive, monumental three-story building with full basement and its soft red-brick exterior and Vernon, Indiana, limestone trim looks very much as it did in the 1860s.

These buildings from the school's arsenal days are all still very much intact. All of them are used for classes in some respect. The 1867 barracks is one of the earliest remaining buildings on campus and is located behind Stuart Hall. It once housed the detachment of fifty soldiers that staffed the Arsenal, but now houses the JROTC program. The West Residence, built in 1870, accommodated officers. It is now houses the Colonel's Cupboard, a restaurant run by students and open to the public. Allen Hall was the Arsenal's barn, but has been completely renovated and was used for foreign language classes until they were moved back to Treadwell, it now currently houses 'project last chance', or PLC, a long term detention system for troubled students who attend the school.
Magazine and the Guardhouse:

Although still standing, these buildings are not used for classes. The guardhouse was the building guarding the main entrance to the Arsenal. The school's security personal now have their offices there. The magazine was used to store gunpowder and other volatile substances. It is now used as an auxiliary building for JROTC, although no weapons are stored there.

Stuart Memorial Hall and The Stadium:

Stuart Memorial Hall was built in 1939. It houses the Math/Science Academy on the first and second floors, with the general population on the third. It also includes the Forum, the school's secondary, smaller auditorium. In the front of the building is a large atrium, which includes stained glass, commemorative wall artwork, and a bust depicting the building's namesake, Principal Milo H. Stuart. In the bell tower is a carillon which plays during the school's passing periods.
Howard Longshore Stadium is where the school's football team has its games and where the marching band, track and field, and cross country teams practice. It includes a running track which circumscribes it, as well as concrete bleachers on each side. It was resurfaced with FieldTurf after the 2012 Super Bowl. Both the Stadium and Stuart Hall were originally constructed during the Great Depression using New Deal funds.

Usually considered to be the main classroom building and having about half the classroom space, Treadwell Hall was constructed in 1921 and was the second building addition to the new school, and the only one still standing. The original officer's East Residence was demolished in 1929 after two wings were added to the building in 1928. Also built in 1922, Lone Hall was originally known as the Power and Shop Building. It housed the school's power plant and vocational classes.

When it was built in the 1950s, Morgan Hall was considered the "new" shop building, because it took over some of the duty from Lone Hall.
Moon Hall, the gymnasiums, and Anderson Auditorium:

Built in 1965, the music hall houses the kitchen and cafeteria as well as the music department and the commercial foods track for CTM. Constructed in 1977, this auditorium is the school's main auditorium and is where the school's plays and special classes, such as set design, are held. The West Gym was constructed in 1929 and known as the Boys' Gym, with the Girls' Gym being in Lone Hall. It was renovated in the 1970s as the new East Gym/Natatorium was being built next to it. These facilities are mainly used for swimming, volleyball, conditioning, and basketball. They also hold physical education classes during the day.
Media Center:

The media center houses the school's library, computer labs, resource rooms, and a bookstore. There is also an outdoor amphitheater adjacent to the outside of the building.

The Story of Technical High School, 1916 – a history of the early years of Arsenal Tech