These five bronze statues by artist Gary Aslum pay tribute to the musical tradition of Asheville's Mountain Dance and Folk Festival. The sculptures are located where the first city auditorium stood in 1902 and are near the newly bandshell which was dedicated in honor of Bascom Lamar Lanford. Asheville's festival has the distinct honor of being billed as the first folk music festival in the United States. Since 1928, the festival has been an annual tradition in Pack Square. Bascom Lamar Lunsford, a local attorney who is best known today as a prolific songwriter and music organizer, was determined to carve out space for Appalachian folk music to be viewed with respect and taken seriously in the burgeoning record industry and the larger cultural landscape of American music. This annual festival in Pack Square was Lunsford's wildly successful mechanism to celebrate Appalachian culture and music while offering a stark contrast to the demeaning popular culture depictions of this musical heritage as the product of backward "hillbillies." 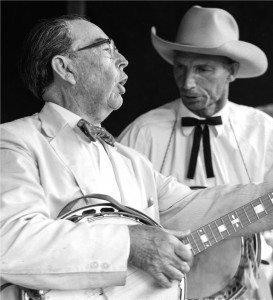 Lunsford presiding over the Mountain Dance and Folk Festival at Pack Square. 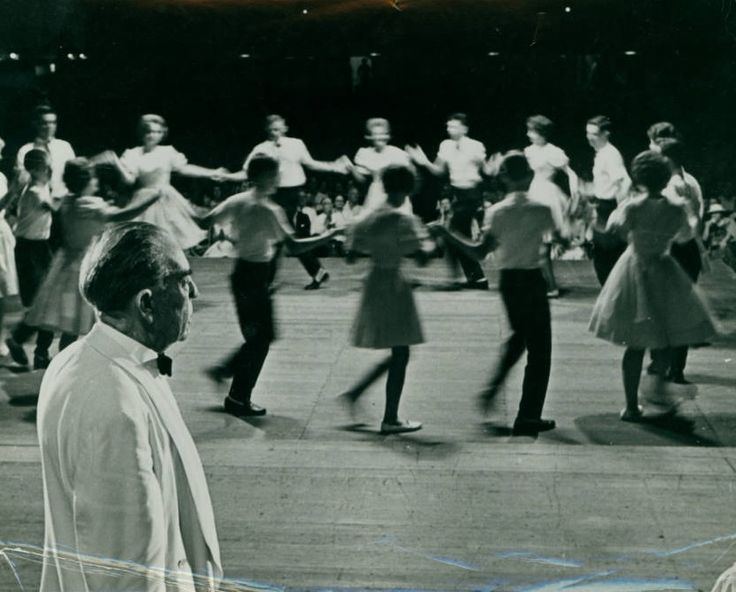 A program from the 59th annual Mountain Dance and Folk Festival, 1986. Courtesy of UNC Asheville Library. 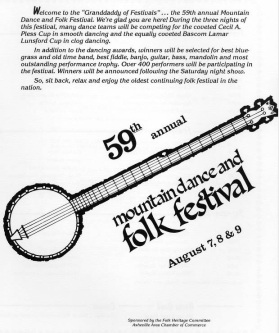 These five bronze figures pay tribute to the history of the Mountain Dance and Folk Festival which began in 1927. 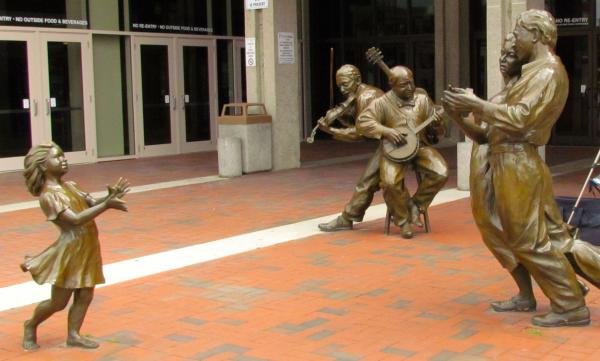 Born just outside of Asheville in Mars Hill in 1882, Bascom Lamar Lunsford grew up steeped in the folk music traditions of western Carolina. He grew up playing the banjo and fiddle, while his mother's voice filled his childhood home with the lyrical ballads of generations past. He would have many careers over the course of his life, from a fruit tree salesman to a lawyer, yet these remained peripheral to his lifelong commitment to, and deep love of, mountain music and dance.

Playing old-timey music wasn't enough for Lunsford; he wanted to see it celebrated, preserved, and respected in its own right. This deep desire, coupled with Lunsford's magnetic personality and organizing ability within the region's music circles, led to the birth of the Mountain Dance and Folk Festival in 1928, albeit in a bit of a roundabout way. Lunsford's folk festival actually began as a musical entertainment segment of Asheville's new Rhododendron Festival--an early effort by the Asheville Chamber of Commerce to continue growing their tourism market. It turned out, however, that the draw of Appalachia's music and dance culture was a heady tourist attraction in its own right; within a few years, Lunsford's music and dance celebration broke off to formally become the Mountain Dance and Folk Festival.

By 1935, Lunsford's festival was attracting such talent as Pete Seeger, and it did not take long for the festival's reputation to attract even more old-time and bluegrass icons. Lunsford, himself, continued to produce scores of new songs while simultaneously devoting himself to the collection of field recordings to preserve Appalachia's timeless sounds. Perhaps his most notable composition was "Mountain Dew," which he had the honor of performing at the White House in 1939. Besides President Roosevelt, the King and Queen of England were also present. In the late 1940s and early 1950s, Lunsford worked with the Library of Congress to record nearly 350 songs for what would become his "memory collection."

Over the decades, Lunsford's involvement in Asheville's music culture was a constant. He continued organizing the festival and performed each year until a stroke ended his streak in 1965. He passed away in 1973. His legacy, however, remains as vibrant as his energized and captivating performances from so many decades past. While his Mountain Music and Dance Festival remains the oldest and longest running folk festival in the nation, his legacy has also led to the growth of festival culture in Asheville and far beyond. Even after his stroke, he helped found the Bascom Lamar Lunsford "Minstrel of Appalachia" Festival in 1967 in his neighboring hometown of Mars Hill. While still an obvious celebration of mountain music, this new festival had a specific focus on Lunsford's devotion to preservation and remembrance of the cultural history of the music, itself. The festival features a "swap," where musicians can share their knowledge of songs and dances passed down verbally through generations, thus keeping alive the oral tradition of Appalachia's ancestral music foundations. Like the Mountain Music and Dance Festival, the Bascom Lamar Lunsford Festival still operates annually, a tribute to the eclectic man behind the music.