Skee's Diner opened in Torrington, Connecticut in 1946, serving fast and affordable food to its customers. It was owned and run by the Cisowski brothers. The diner itself was a manufactured building that was made in the late 1920s-part of a trend that began in that decade and lasted until just after World War II. Skee's has a classic manufactured diner aesthetic. The steel structure is made of steel and features a barrel roof, marble counters, sliding doors, and seventeen stools. Skee's Diner used to stand on the corner of North Elm and Main Streets. After its closure in 2001, it was purchased by several individuals and organizations that hoped to preserve this piece of Americana. The diner now belongs to the Torrington Historical Preservation Trust, which is working to renovate and reopen the diner in a new location. The dine closed in 2001 but the building has has been listed on the National Register of Historic Places since 2002. 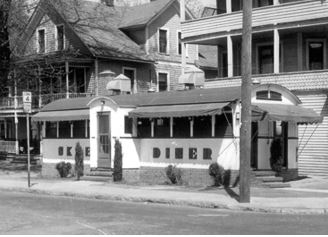 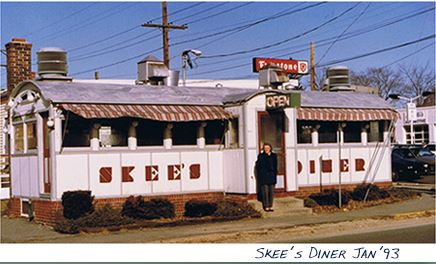 The diner building was manufactured in the 1920s by Jerry O'Mahony, Inc. of Elizabeth, NJ and shipped to the Saybrook, Connecticut area. It didn't reach its Torrington location until 1945, when Rudy Cielke signed a 10-year lease on land at the intersection of North Elm and Main Streets. For $90/month, he was allowed to lay a foundation and set up the diner, then named "Rudy's Diner."

Only a year later, the lease was transferred to Anthony and Edmund Cisowski, who opened it as Skee's Diner in 1946.

Over the next few decades, the diner survived a flood, appeared on a greeting card by Jeffery Milstein (Paper House Productions) and in a painting by John Baeder, and changed hands multiple times. It closed in 2001 and was placed on the National Register of Historic Places the next year.

Since 2013, Skee's has belonged to Torrington Historical Preservation Trust. Their plans for restoring and reopening the diner (location TBA) are underway.