Located in the historic Irvington suburb just east of downtown Indianapolis, the Benton House was built in 1873 shortly after Irvington had been established. The house is named after Allen Benton who served as the president of Butler University on two separate occasions. Benton lived in the home from 1890-1907 due to its close proximity to Butler University while it was located in Irvington. The home was purchased by the Irvington Historic Landmarks Foundation in 1966 and is still owned by the Foundation today. The house serves as the Foundation’s headquarters and is available for event rentals and special tours by appointment. Benton House was added the National Register of Historic Places in 1973.

The sun sets behind the 1873 Benton House. 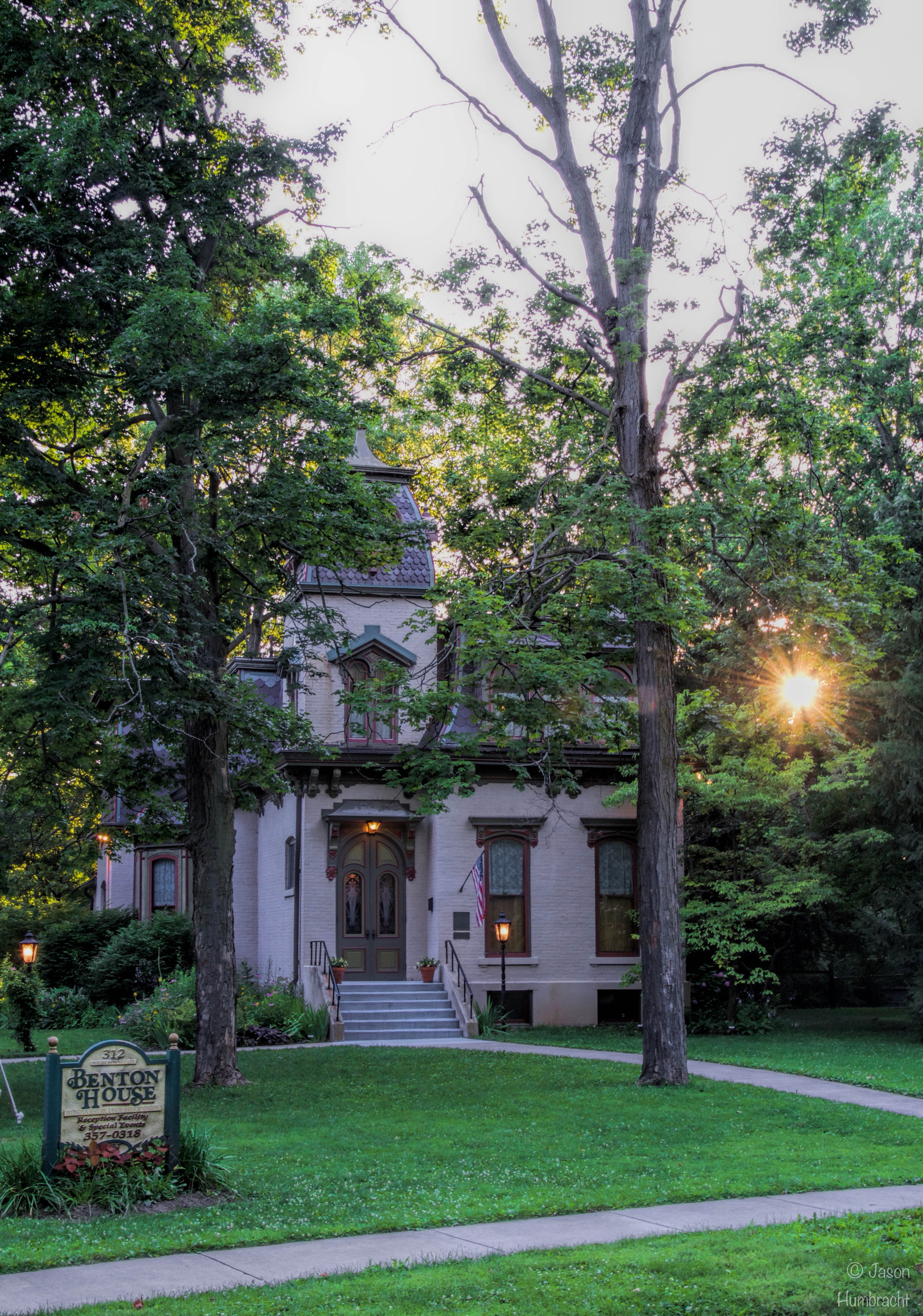 A side few of the Benton House with day lilies blooming in the foreground. 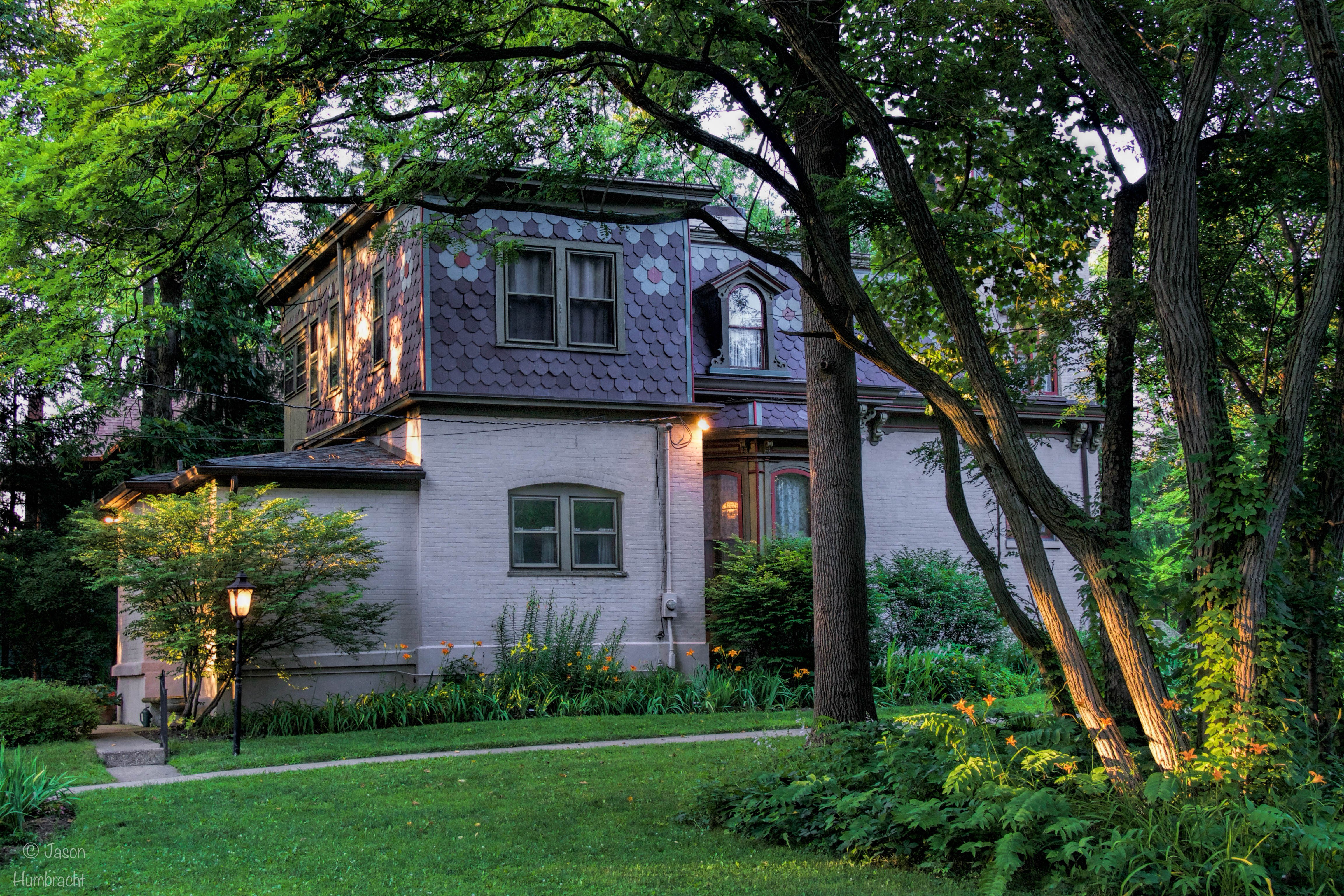 A view of Benton House's foyer, within its tower entrance, to include period furnishings, hardwood floors, and its central staircase. 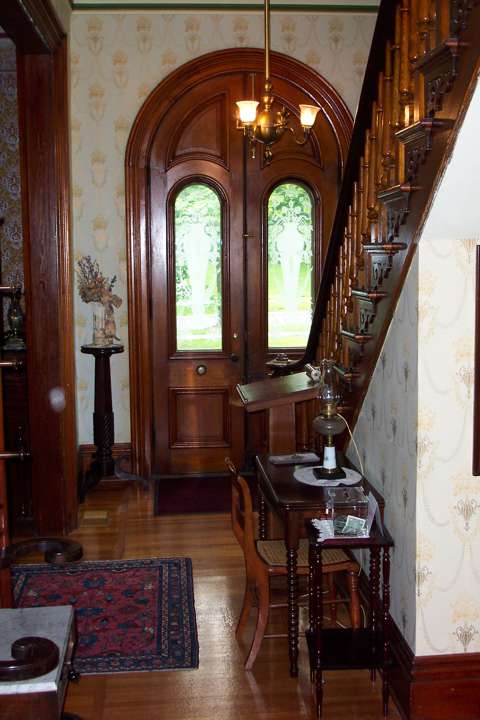 The Benton House's front parlor with a glimpse of the dining room next door. 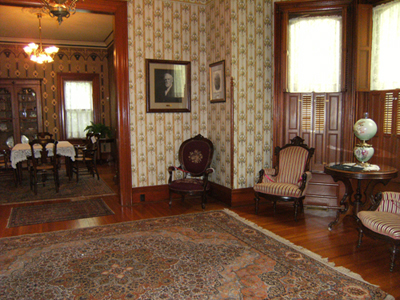 A couple is married on the steps of the Benton House. 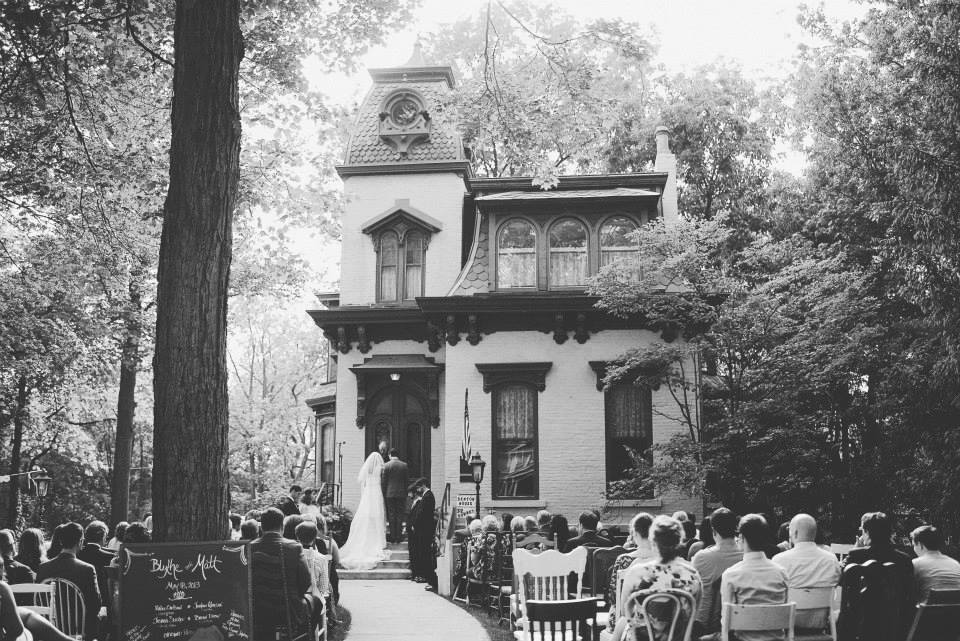 The Second Empire style, 3,500 square-foot Benton House was built by Nicholas Ohmer in 1873.  The two-story brick house features a classic mansard roof (a four-sided roof with each side having two separate slopes with the lower section steeper than the upper) and a prominent entrance tower with cupola.  Its first-floor windows are capped by ornate lintels while its interior is home to a curved, hanging staircase, ornate woodwork and oak hardwood floors.

Ohmer, at some point, sold the house to F. R. Kautz who, in turn, sold it to Allen Benton in 1890.  Benton was then at the end of his second tenure as the president of Butler University.  He had previously served in that capacity from 1861 until 1868 when he resigned over the issue of what he considered to by the low pay of the faculty.  He had arrived from New York at the then Northwestern Christian University when it first opened its doors in 1855 as a professor of ancient languages.  After his resignation in 1868 he then went to Alliance College in Ohio where he served as a professor of Latin and its president.  He returned to NWCU as a professor of philosophy in 1876, the year before the university moved from its original location to Irvington in 1877.  It changed its name to Butler University the same year.  Benton served again as the university’s president from 1886 to 1891 when he resigned for a second time to focus on teaching.  He died in 1914.

Benton sold the house in 1907 to Willis and Isabelle Miller and their son, Herschel, sold it to the Irvington Historic Landmarks Foundation in 1966.  The Foundation then restored the historic house and that restoration included new sidewalks, slate roof, gutters and downspouts on the exterior and period carpet, wallpaper furnishings and decorative elements inside.  The Irvington Garden Club, which is also headquartered at the house, re-established the home’s gardens and supplied them with Victorian Era heirloom plants and flowers.  The house has served as a cultural, historical, social and civic center for community use ever since.  The Foundation organizes an annual Irvington Tour of Homes, which has occurred for over 40 years, as its primary fund raiser.  It also provides guided tours of the home by appointment only.  Finally, Benton House is also available for meetings, private parties, retreats, showers, and wedding related and other celebratory events.

Open for private tours by appointment only. Please call or visit their website.