Originally known as the Administration Building of Indiana Central University, Good Hall was built in 1904. At that time, it comprised the entire university’s holdings and did so for almost 50 years. The large, red brick building features a 3.5-story central section surrounded by symmetrical two-story wings. It was built in the Classical Revival style and is now an administrative building on the campus of the University of Indianapolis, which is located just south of the city center. Good Hall was added to the National Register of Historic Places in 1984.

Good Hall is named for the third president of the then Indiana Central University. It was built in 1904.

A close up of Good Hall's pediment roof with decorated tympanum and its wide entablature supported by six Ionic columns.

The semi-circular drive that led to the entrance of Good Hall has since been removed. 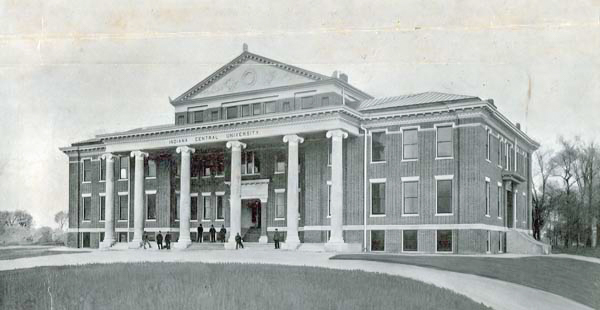 The Greyhounds baseball team practices in a field adjacent to Good Hall (on the left) in this early 20th century photograph.

An early design of the University Heights neighborhood, to include the lot that would eventually be home to Good Hall in the upper right. 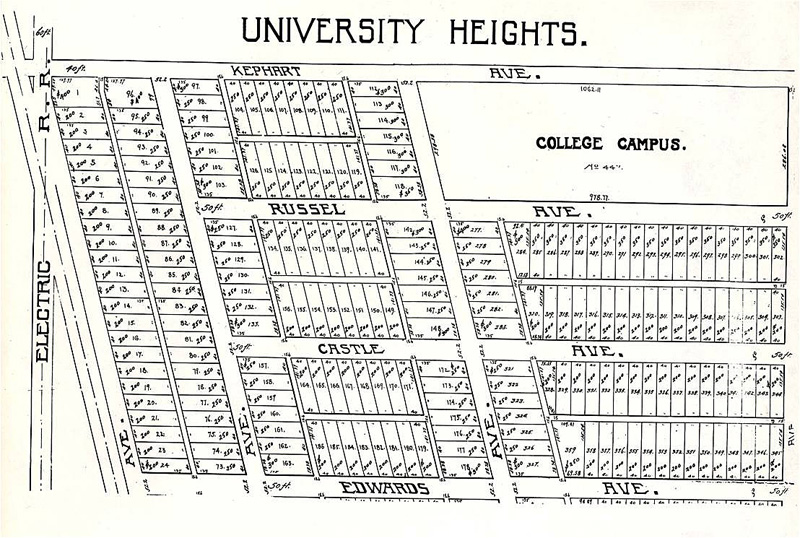 The history of the University of Indianapolis is closely tied to the Church of the United Brethren in Christ and the University Heights neighborhood that it borders.  It was incorporated as the Indiana Central University in 1902, but lacked a physical home until a successful realtor named William L. Elder made a modest proposal.  Elder’s proposal was this: he would donate eight acres and a university building to the school if the church/school would assist him in selling 446 lots in his new Marion Heights development, which he would change to University Heights if they agreed to his deal.  They did and he did.  The university was granted lot number 447 and the structure Elder financed was Good Hall, then known as the Administration Building.

When viewed from the front at ground level, Good Hall’s most prominent feature is its large, two-story portico or porch.  The portico’s wide entablature (the long, horizontal lentil supported by the columnns that, in turn, supports the portico’s roof) features a relatively plain cornice, frieze, and architrave.  On the building’s north side is a large porte cochere (coach gate or carriage porch) that is supported by two large Ionic columnns.  It was designed to provide people shelter from the elements as they disembarked from their carriages or automobiles.  Good Hall also features a noticeable pediment roof atop its central section that is completed by an ornamented tympanum (the vertical, white, triangular front to the roof that is decorated with grape vines, lanterns and a central circle surrounded by stars).

The Administration Building, as the university’s only structure, was home to its classrooms, administrative offices, library and chapel, to which daily attendance was mandatory in those early years.  It also served as home to the university’s first president, Reverend John Roberts, whose wife cooked for the students and faculty.  The university’s first graduating class of 1908 was comprised of two students, one of which was I. J. Good.  Mr. Good would be appointed the school’s third president in 1915.  The building is currently named in his honor.

For a time, the school was known as Indiana Central College and then, in 1986, its name was changed to the University of Indianapolis, UIndy to students and locals.  Today, Good Hall is home to the history and political science, anthropology, social sciences, and social work academic departments, and the School of Psychological Services.  It also houses a community research center, the Leah Ransburg Gallery, which displays student and faculty artwork, and the Recital Hall that is used for lectures, conferences and special events.

Otterbein and Hanna Avenues
Indianapolis, IN 46227