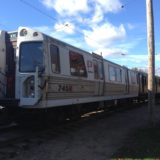 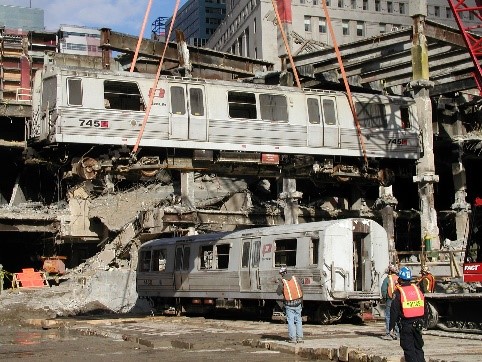 It was a Sunday in 2001, but Peter Rinaldi, a senior engineering manager with the Port Authority of New York & New Jersey was working another long, grueling day at “ground zero,” coordinating the logistics of the recovery operation. He opened an intact emergency exit hatchway on West Street near Vesey Street and entered, along with several other engineers, police and fire personnel, the north tube of the PATH system’s loop through the World Trade Center site. They had no idea what to expect. The tunnel was flooded so small rafts were employed. Paddling through a remarkably intact section of the tunnel and following the submerged trackway as it curved right, they found themselves at the north end of the 5-track PATH WTC station. There Peter climbed onto the platform and walked through the doors of car 745, still open and waiting for the passengers that never came back on 9/11. He stepped aboard the car and into the operating cab and at that moment became determined that, somehow, this car must be saved.