Completed in 1949, the Glass House was designed and frequently inhabited by architect Philip Johnson. The building is made of glass and steel, featuring an open plan, large doors on all four sides, and simple furniture and decor. As its name suggests, its glass walls let in ample natural light and allow visitors to enjoy views of the landscape on all sides. Over the years, Johnson's estate grew to over 40 acres, hosting not only the Glass House, but also a Brick House, library, and art galleries. Johnson is known not only for his modernist architecture, but also for his attraction to fascism during the 1930s. He retracted his support of Hitler in the 1940s and designed a synagogue for a Jewish congregation in New York in the 1950s. 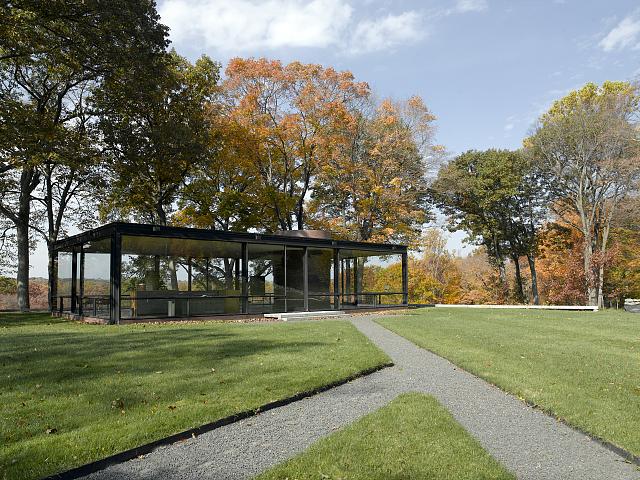 Johnson's personal life and political views have garnered about as much attention as his professional accomplishments. As Marc Wortman writes, "Articulate and passionate about anything modern, new, artful, and monumental, Johnson was stunningly creative, socially incandescent, and passionately opinionated on all matters of taste. He had a coruscating, arrogant wit, and relished table talk and wicked gossip about art and ideas and the people who made them." Raised with wealth, Johnson spent many summers in Europe and quickly made connections in the high-end art world. He admired ancient and 19th-century German philosophy, particularly the work of Friedrich Nietzsche.

In 1932, Johnson attended a Hitler Youth rally in Potsdam, Germany. Many years later, he reflected on the experience: "You simply could not fail to be caught up in the excitement of it, by the marching songs, by the crescendo and climax of the whole thing, as Hitler came on at last to harangue the crowd" (quoted in Marc Wortman). Johnson was thus energized by a new interest in politics, viewing fascism and Nazism as the political counterparts to modernist architecture. Johnson was an anti-Semite and was not bothered by the Nazi's persecution of Jews during the 1930s. Even when Nazis moved to persecute homosexuals (Johnson was gay) or attacked the Bauhaus school (of which Johnson was a fan), he remained optimistic about Nazism's potential for social progress.

In 1939, Johnson returned to the US. Soon afterward, he was featured in a Harper's Magazine piece about American Nazis. His support of the Nazi regime led to the FBI designating him as a person of interest. FBI investigators investigated his activities and drafted a report that documented his connections with Nazi party members in Germany and his collection of Nazi literature, which included Joseph Goebbels' Signale der Neuen Zeit and Theodor Fritsch's Handbuch der Judenfrage.

Similar to other Americans who initially reported interest in learning more about Hitler's fascist regime, Johnson disassociated himself with Hitler's regime in the 1940s as America went to war and as the worst parts of Hitler's regime came to light. Johnson returned to school, attending Harvard's Graduate School of Design. Following his time at Harvard, he designed a number of other prominent buildings including this house. In 1956, he designed a synagogue in Port Chester, New York free of charge. This act was important to Johnson and interpreted by many as an act of atonement for his initial support of Hitler's regime.

Closed for winter season. Tours will resume on May 1, 2017. Tickets for 2017 tours are available now. Tickets are required for admission. Advance reservations are highly recommended.