The Elgin Tower Building, originally the Home Banks Building, stands 186 feet tall and 15 stories. It was built in 1929 to house the Home National Bank and Home National Savings and Trust, but the bank failures of the Great Depression forced the banks to close. The tower's occupancy rate has varied throughout the years in ways that reflect the overall economic health of the city.

Elgin Tower during the most recent modernizing and remodeling project 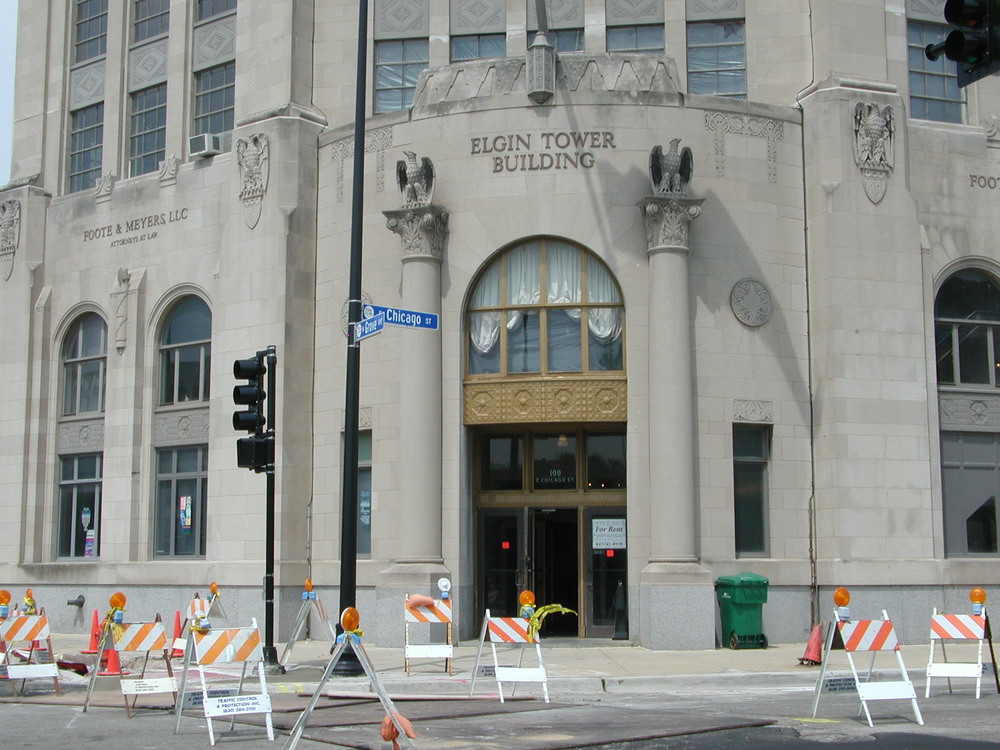 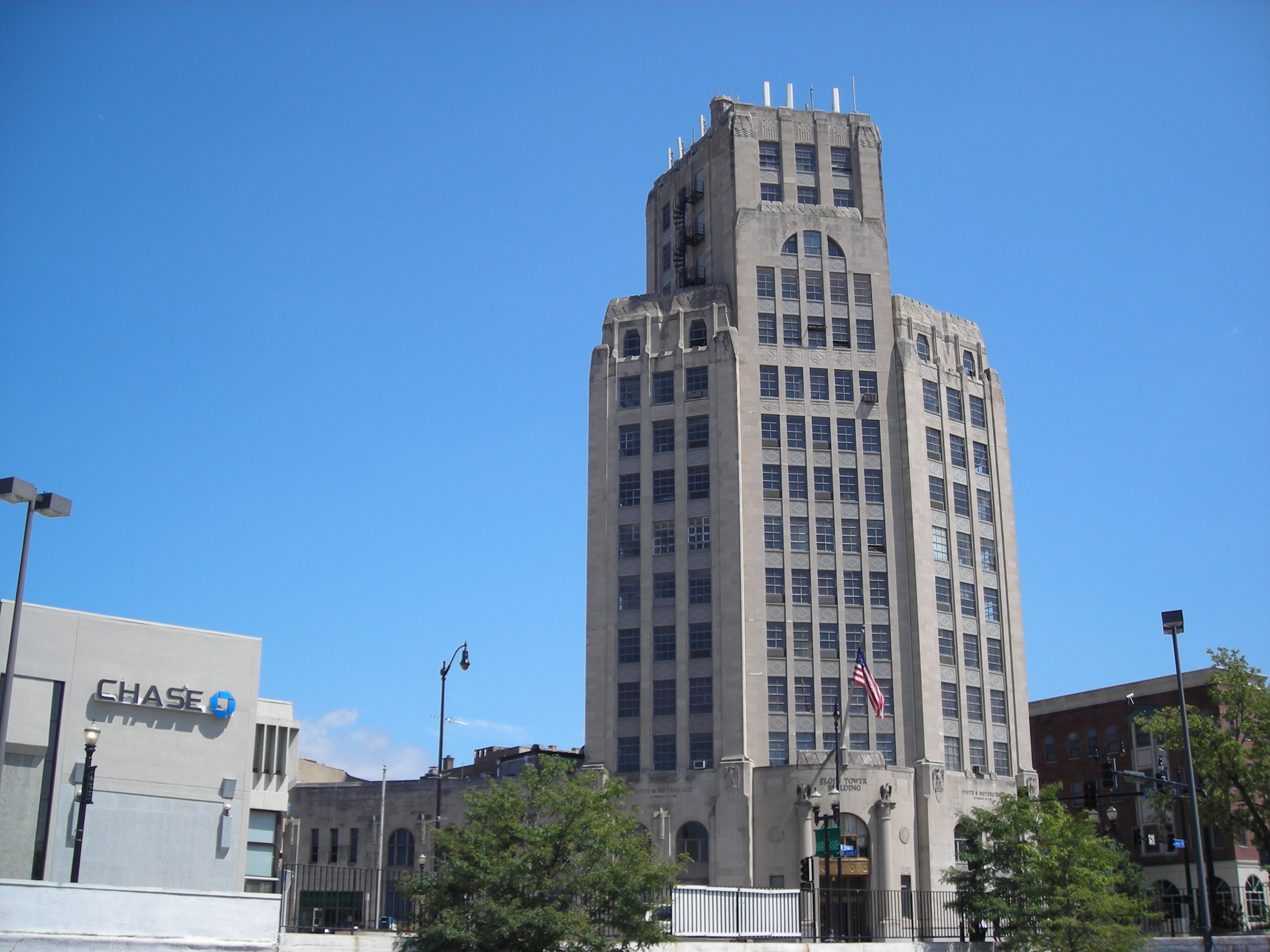 The Elgin Tower represents the suburban town’s successes and failures. Built in 1929, the -- Bank had realized much success during the 1920s, just as the city had seen. But the Great Depression resulted in the bank’s demise. The town itself suffered but began to recoup its losses in the 1930s-50s, when it became a thriving railway hub. However, again, the rapid popularity of the automobile and the U.S. government’s willingness to invest heavily in Interstate Highway systems left Elgin without a major industry again. Today, the town has yet again become a success as a suburban community relying on the services sector and home building. As of 2016, the buildings is set to be rebuilt as an apartment complex just as technological places begin to make Elgin a home.
Kane County, 35 miles northwest of Chicago’s downtown region, has a history that has strong ties to Native American history, notably the Potawatomi. The Fox River in Elgin offered good fishing to Native Americans, and the river could be forded at many times of the year. Officially, the town was given it name by Hezekiah Gifford after the Black Hawk War in 1833. Only four years later, bridges and mills could be seen dotting the landscape.
As Chicago began to grow in the 1830s and 1840s, Elgin enjoyed a status as an important stop for stages passing through Elgin on the way to, or leaving, Chicago. The stage routes inspired construction of railways and,  In 1849, “The Galena & Chicago Union Railroad reached Elgin, which later would be served by railroads running along both banks of the Fox River, linking the growing town to Chicago and other urban centers. Elgin showed great promise in the 1850s, and in 1856 the Elgin Academy was founded.”
Elgin experienced robust growth during the Civil War. For one, military production coupled with the town’s ability to generate power from the water moving through the Fox River fostered growth. However, the birth of the Elgin National Watch Company proved most beneficial to the city, temporarily existing, in 1864, as the world's largest watch manufacturing complex, which provided Elgin with national notoriety. Other industries included shoe factories, grain mills, Borden Dairy, and the arrival of the Northern Illinois State Mental Hospital in 1872. All told, In twenty years, from 1870 to 1890, Elgin’s population grew from 5,441 to 17,823.
That growth continued throughout the 20th century into the 1920s when Elgin existed as a center for several interurban trains, which linked together the towns of the Fox River Valley and major cities to its east, notably Chicago. During the height of Elgin’s prominence during the “Roaring Twenties,” construction began on the Home Banks Building (in March of 1928, to be specific) for a cost of $800,000. The Home National Bank and Home National Savings and Trust existed as the building's principal tenants alongside many leased offices. The belief at the time was that city’s first skyscraper significant Elgin’s rise from an old mill town to a bonafide city.
However, the Great Depression immediately altered Elgin’s local economy. The Home National Bank collapsed, as did many banks of the era and within a mere two years the building went from nearly 70% occupied to roughly 35%. However, The First National Bank of Chicago took control of the tower in 1932 and revived the health of the structure;  occupancy rose to 60%. But, the success of the Elgin Tower came at a price because the new tenants benefitted from a ban on new construction in the city of Elgin.
The Elgin Tower, as did the town of Elgin, received an economic boost from World War II, just as it had during the Civil War. Elgin became a source for manufactured goods and, as a result, investor Otto Pelikan purchased the building in 1945, which allowed the building to see nearly 100% occupancy by the 1950s. However, just as Elgin again appeared on the cusp of long-standing prosperity in the 1950s, the once thriving interurban railway was dismantled as the automobile and interstate highway system made the rail system irrelevant. As well, manufacturing suffered in the post-war era, notably by the 1960s. And, the Elgin National Watch Company closed in 1965. By the 1970s and 1980s, many shopping malls arose in nearby suburbs, which hurt Elgin’s economy; investors avoided Elgin due to its declining economy during the 1960s and 1970s. Again, the city’s success can be noted by the health of Elgin Tower; in 1980, occupancy fell to 40%. Since then, the tower has changed hands many times.
In the fall of 2016, the Chicago Tribune reported that renovation of the tower had begun, and again it is noted that the tower symbolized the overall success of Elgin. “The city is providing a total of $6.35 million in development assistance for the Tower Building. The project has an estimated $16.6 million construction budget. Once completed, the 15-story, 1929 Tower Building will house 45 one- and two-bedroom apartments...It's a new beginning, and a key piece in the puzzle for the downtown redevelopment and bringing in people," [Elgin City] Council member Rose Martinez said.
In short, to look at the Elgin Tower is to look at history, and present state, of Elgin. The success of the town and the tower seemingly go hand-in-hand.