This rock marks the location of the Confederate surrender of Columbia. The rock was engraved with information from the United Daughters of the Confederacy and dedicated in dedicated in 1914. The city was a strategic target for General Sherman and the Union for a variety of reasons, but none more significant than the symbolic value of capturing the capital of the first state to secede. The succession convention held in Columbia served as the starting point for the Confederacy, so taking the city was a powerful demonstration of the Union's growing capacity to take and hold Southern territory.

An engraved stone marker next to a church placed in 1914 marks the site of the surrender of the City of Columbia. The stone, a gift from the United Daughters of the Confederacy, was dedicated during a ceremony attended by the last surviving witness. 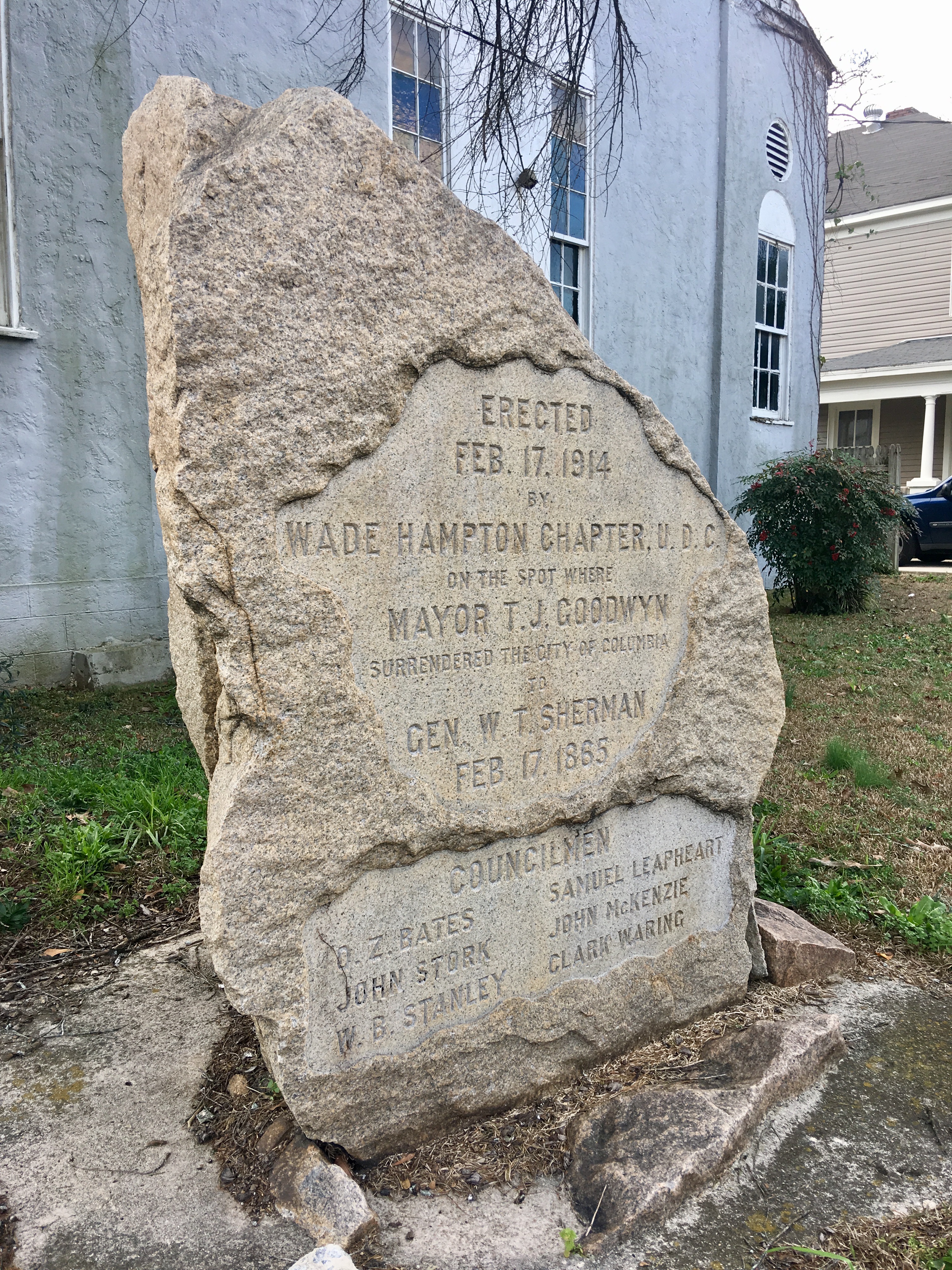 The surrender of Columbia was significant for a variety of reasons, but none greater than the fact that the movement for secession originated with a meeting in the capital of South Carolina. The secession convention at Columbia was the first of all the Southern states and saw delegates vote unanimously in favor of leaving the Union.

On February 16, 1865, it became clear to Confederate leaders that they would be unable to halt the Union advance. In response, Confederate troops burned down the bridges leading to the city under the direction of General Wade Hampton III. Hampton, the grandson of a Revolutionary War hero, was a leading planter and a staunch defender of slavery and white supremacy. He evacuated his troops and placed the mayor, TJ Goodwyn in charge while he fled from the Union advance. As he retreated, Union forces shelled the city from across the river.
Seeing what happened to other Southern cities, recognizing that he had no military force to defend against the Union, and hoping to spare Columbia, Mayor Goodwyn surrendered the city on the morning of the 17th. Between 8 AM and 9 AM, the city's Aldermen and the Mayor surrendered formally to Sherman's troops at this location. Sherman and his troops destroyed much of the city prior to the surrender. At least two thirds of the city burned as Union troops set fire to buildings as part of their plan to break the will of Confederate leaders and bring the war to an end.
In 1914, the United Daughters of the Confederacy held a dedication ceremony featuring the sole surviving witness, Norton W. Brooker, and six descendants of the mayor. The engraved rock sits in front of the church on the corner of River Road and Beaufort Street in the historic Earlewood neighborhood.