The English High School is America’s oldest public high school. It started in 1821. Unlike other schools at the time, the school was meant to prepare students for industry rather than college. This school ultimately changed how education was transitioning into what is seen now. This is the school's current location. The school moved for the seventh time to this location. 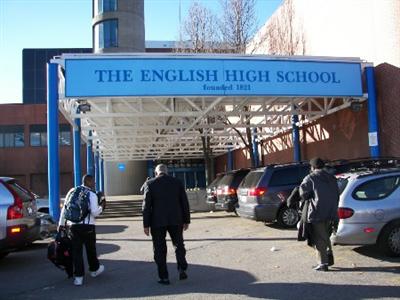 One of the old buildings. 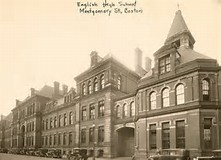 The school’s beginnings came from The Boston School Committee. The committee of Boston’s citizens wanted to provide two new things for their city: education for boys after ten and preparation for life in industry. At the time boys were only educated until age ten in grammar schools unless they went to Boston Latin School to prepare for Harvard. In 1820, the Committee approved the school’s creation.

The school began as English Classical School. It was located on Beacon Hill in a building that was already there. The first year had 101 boys enrolled. The first headmaster was Dr. George B. Emerson, a prominent leader in educational reform at the time. In the beginning, the school required an entrance exam like many other schools. Since the creation, there have been many changes.

Changes include location, admissions, and curriculum focus. The school was located on the corner of Derne and Temple St, on Beacon Hill, Bedford Street, Warren Street, Avenue Louis Pasteur, behind the Commerce building, the Tower, and finally McBride Street. In 1920 they stopped requiring an entrance exam. Then in the 1970s girls were allowed to attend. The focus of the school has shifted from manufacturing, trade, and engineering, to both technical paths and liberal arts like many other schools.

Today the school is similar to any other high school. Their Mission Statement is “The mission of The English High School is to challenge each student academically while fostering an enduring commitment to honor, achievement and service to humanity.” Their nickname is Blue and Blue. The school has an intense long-standing rivalry with the first public school Boston Latin School. Students at the school are involved in teams and clubs. There is baseball, soccer, football, cheerleading, basketball, dance, National Junior Honor Society, Tech Rangers, Robotics, Homework Help, Debate Team, and MCAS /SAT Prep and JROTC. Over the years, the school has evolved with the times. English High School’s creation began a model for public high schools all over inspiring higher education for America.