The Minetta Tavern was established in 1937 by Eddie Silieri, who became known as Eddie Minetta, taking his name from the tavern that in turn borrowed its title from the stream that ran through the area. Founded at the height of the prohibition era, The Minetta Tavern became a popular speakeasy for many literary legends, most notably Joe Gould, who frequented the pub so often that he was said to receive his mail there. With perhaps a similar taste for pubs, authors Ernest Hemingway, Ezra Pound, Eugene O'Neill, E.E. Cummings, and Dylan Thomas visited the bar to unwind and socialize. Today, The Minetta Tavern retains much of its history, as much of the original design remains, serving to transport patrons back to a time when the world's greatest authors congregated here and wrote their masterpieces.

Inside the Minetta Tavern, photo featured on the restaurant's official website 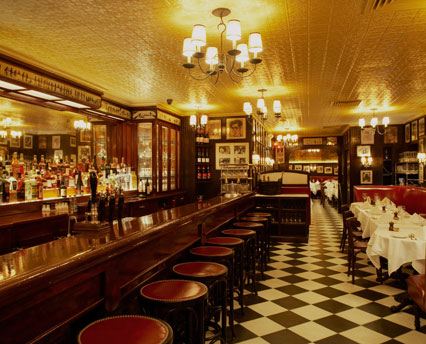 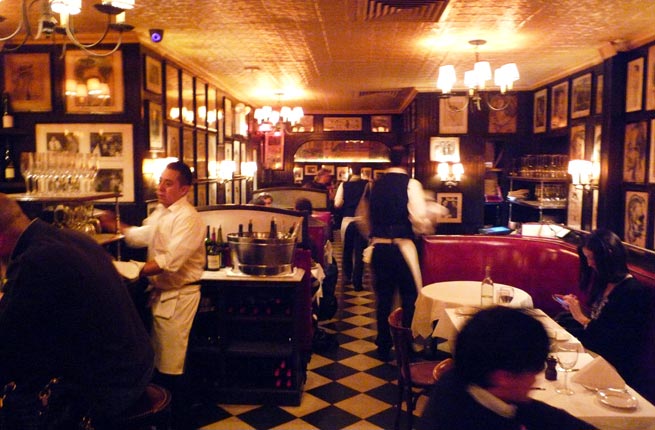 The Minetta Tavern was established in 1937, replacing The Black Rabbit that had closed its doors just 8 years prior. The origin of the restaurant's title dates back centuries. The brook that ran through the area was originally called the "Mannette" by Native Americans. This name meant "Devil's Water." Though time and acculturation slightly altered the name, now “Minetta,” the original meaning was preserved and provides a cultural background for the tavern's name. At the time, alcohol was commonly referred to as "The Devil's Water.”

Frequented by many of the 1950’s "beats,” Minetta became increasingly popular among the literary crowd. In addition to Joe Gould, Ernest Hemingway, Ezra Pound, Eugene O'Neill, E.E. Cummings, and Dylan Thomas, the pub also became a hotspot for a group who called themselves “The Ravens.” Taking their name from Poe's poem, this group met and published poetry in what became known as The Raven Anthology Journal, which was published from 1933-1940. Gould was perhaps the most controversial member, and purportedly roamed The Village with a sign that read "Joseph Ferdinand Gould, Hot Shot Poet from Poetville, a Refugee from The Ravens. Poets of the World, Unite. You Have Nothing To Lose But Your Brains." Gould boasted that he wrote An Oral History of Our Time, a work that was supposedly completed in the Minetta. It included bits of over 20,000 conversations he overheard. It was a hoax, however. The manuscript does not exist.

Today, the Minetta Tavern is run by Keith McNally. A portion of his biography as found on the tavern's official webpage reads, "... born in London and moved to New York City in 1975 where he distinguished himself by being fired from every job he ever held." After taking over the Minetta, McNally closed the tavern for a period of 6 months to refurbish the pub back to its historical look. Today, the tavern retains the original wooden bar that was first installed in 1931, and it still serves a Northern Italian cuisine characteristic of its first days.