Built in early 1909, Campbell’s Covered Bridge is the last remaining covered bridge in the state of South Carolina. It is located closest to the small town of Gowensville, SC. The bridge was part of a set of four bridges that would be later constructed throughout Greenville County. This particular bridge was a monumental step for the residence of Greenville County because it provided a connection across Beaverdam Creek that previously was not possible. This bridge is currently listed on the list of National Historic Places.

Side view of bridge 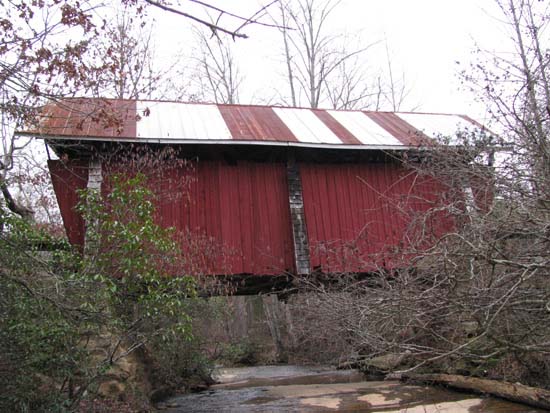 Front of bridge and marker 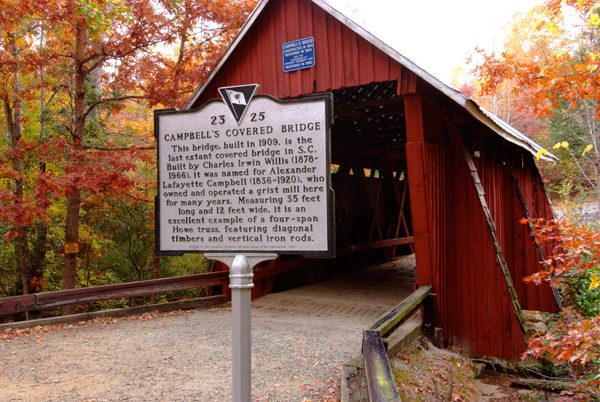 Back side of bridge 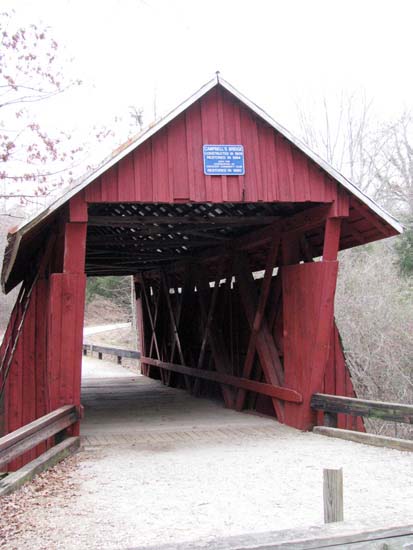 Campbell’s Covered Bridge was one of four bridges that helped to connect small towns and communities to the larger cities of Greenville County, the other three bridges that were constructed included two bridges which helped to connect Tyger River. These two bridges were named Marrow’s and McClain’s covered bridges and the third covered bridge did not receive a name. The last bridge connected the south of Tyger River to the main highway of the time. Campbell’s bridge was the largest and most influential of the four bridges.

Campbell's covered bridge was constructed under the direction of Charles Irwin Willis. Willis was a well known builder of the time in Greenville County. Many other men contributed to the building process including William Howe, Howe was the main supplier of wood and iron used on the bridge. The name of the bridge is thought to of been named for a farmer in the nearby area, Alexander Lafayette Campbell. Campbell was a grist mill owner, and owned the land that the bridge was built upon. He was a widely respected man who was very involved with the surrounding community.

Campbell’s Bridge is located on a rock foundation and sealed with a concrete cap. The bridge spans 12 feet wide and 35 feet long. The rock foundation, was used to give the “effect” of blending in with the surrounding nature. The interior of the bridge is a four span truss bridge and is sealed by a metal tin roof. The sides of the bridge were constructed using wooden boards and fastened by metal bars. These same boards were later used to  construct the floor of the bridge. Campbell’s Bridge has two entrances, one at each end. In addition, it has a small opening near the roof that allows for air circulation and is surrounded by two retaining walls. This bridge is massive, weighing in at around 100,000 pounds!

This bridge posed a major advancement in history for the people of Greenville County. It allowed the local communities to come together. Travel time that had previously taken days, was now shortened to hours. It helped serve as a major part of transportation during its time in history. The bridge shut down for good in the year of 1984. Today, the bridge serves as a historical marker. It was added to the list of National Historic Places in July of 2009.