The train station at Harpers Ferry was built in 1894 by the Baltimore & Ohio Railroad. Designed by architect E. Francis Baldwin, it came during a time of increased tourism for Harpers Ferry and a golden age of railroad passenger travel. Originally overlooking the confluence of the Shenandoah and Potomac Rivers, it was moved to its present spot in 1931. In 2007, the station was restored after a $2.2 million renovation. Today the Harpers Ferry station continues its original role as a transportation center, servicing Amtrak and MARC trains, and is a part of Harpers Ferry National Historical Park listed on the National Register of Historical Places. 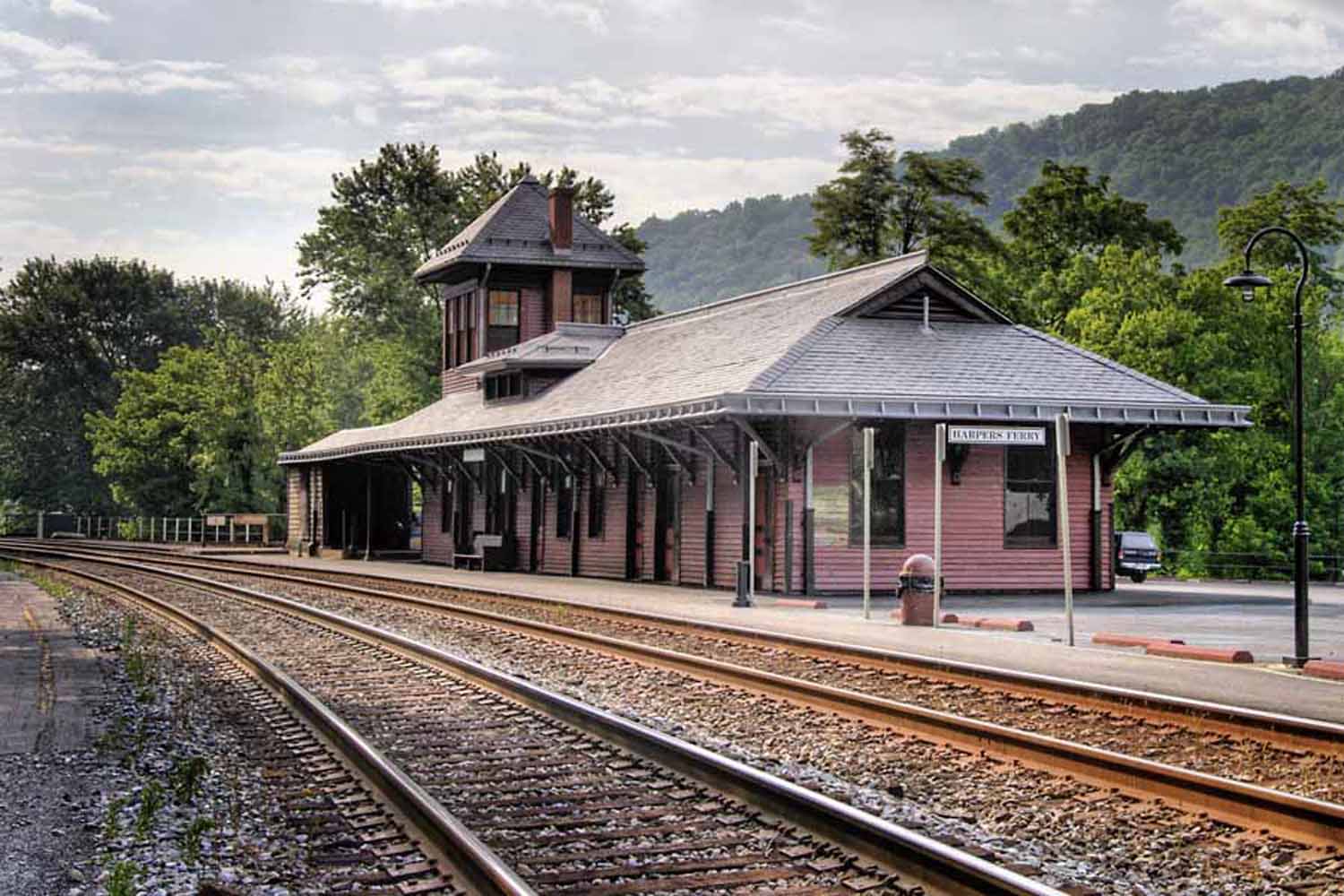 The restored waiting room of the station. Image obtained from TripAdvisor. 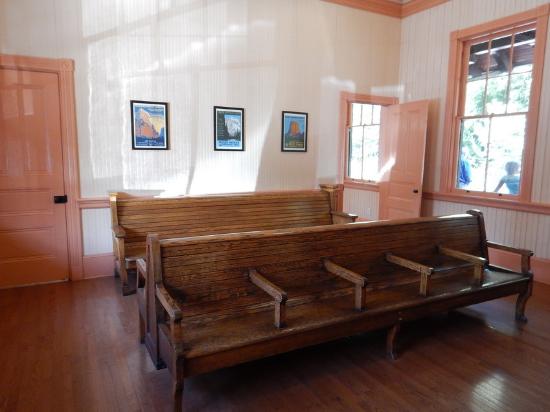 By the late 1800s, the B&O railroad was experiencing problems at Harpers Ferry; the Potomac bridge was too weak to support newer, heavier trains, and the curved shape of the railroad tracks limited how fast they could travel. To alleviate the problem in 1892, the B&O developed a plan to improve the lines at Harpers Ferry which included the creation of a tunnel through the Maryland Heights, construction of a new bridge, rerouting the tracks to go over the old armory grounds, and building a new company passenger station. Ephraim Francis Baldwin (1837-1916) was hired to design the new station. Baldwin was the head architect for the B&O Railroad, and designed hundreds of buildings over the course of his career including many train stations and Catholic churches.

During the 1890s, the B&O had been experiencing financial troubles, limiting its ability to build elaborate stone stations as it had in the past. Instead, Baldwin created a standard pattern of affordable, single-story frame stations. The Harpers Ferry station was constructed in this pattern, and was completed in 1894. The station included a ticket office, freight office, agents’ office, separate waiting rooms for men and women, bathrooms, and a two-story signal tower. In 1898, a waiting shelter was built on the opposite side of the tracks for westbound passengers. This caused safety concerns as some passengers had to cross over the tracks to get from the main station to the westbound waiting shelter. In 1913, an underground passageway was dug linking the two buildings, and an iron fence was installed between the buildings and the tracks. Around this time electric lights were also added to the station.

From the 1880s to the 1930s, Harpers Ferry became a popular tourist destination for railroad passengers. From Harpers Ferry the B&O ran excursion trains to Martinsburg and Frederick, but also to far-away places such as New York, Niagara Falls, Atlanta, and even San Francisco. Many passengers traveled to Harpers Ferry for retreats, conventions, reunions, and celebrations.

By the 1920s, the increasing weights and speeds of trains once again made the bridge and the curve of the tracks at Harpers Ferry inefficient. In 1930, the B&O began a new series of improvements, building another bridge and realigning the tracks. In 1931, the train station was moved several hundred yards to its current location. The floor plan was also altered closer to its current state. Soon after these renovations rail passenger traffic quickly began to decline, mainly due to the Great Depression, the rise of automobiles, and later the development of passenger airlines. In 1951, advances in technology rendered the station’s signal tower redundant, and it was removed. By 1972, the Baltimore & Ohio Railroad had merged with the Chesapeake & Ohio Railroad and the Western Maryland Railroad to form the Chessie System, which itself would later merge to form the CSX Corporation. While many stations were demolished, the Harpers Ferry Station was spared.

The Harpers Ferry train station was included in the Harpers Ferry Historic District, which was added to the National Register of Historical Places in 1979. Despite this, the condition of the station began to deteriorate. In 1999, it was named as one of the Top 10 Most Endangered Stations in America. In 2001, ownership of the station was transferred to the National Park Service. The station underwent a $2.2 million restoration which included the reconstruction of the two-story tower. Most of the money for the renovation was federal funding secured by Senator Robert C. Byrd. In 2007, restorations were completed and the station was rededicated. Today the Harpers Ferry station remains in operation and services two daily Amtrak trains as well as several MARC (Maryland Area Regional Commuter) trains.