Untitled is an abstract sculpture by Herbert Ferber. In 1972, it was commissioned by the American Dental Association (ADA) and originally located in the eastern light well at the ADA headquarters on East Chicago Avenue. The sculpture stands 22 ft. tall and the medium used is cor-ten steel. Not long after Ferber’s death, the ADA donated the piece to the city of Chicago and moved to its current location in 1992. In describing this particular artwork, Ferber explained, “The important thing about this sculpture is that the forms and the spaces between the forms are equally important. The forms hold the space and the space holds the forms. This is very different from looking at a traditional sculpture which is monolithic, a surface which defines a mass.” 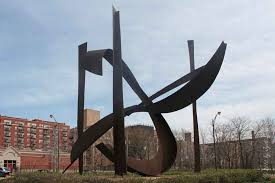 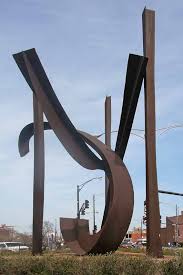 Herbert had a degree in dentistry and was among the leading sculptors of the Abstract Expressionist movement of the 1950s.  Ferber lived from 1906 to 1991.