Julia "Judy" Bonds (August 27, 1952 – January 3, 2011) was an organizer and activist from the Appalachian Mountains of West Virginia. She worked from an early age at minimum wage jobs. Bonds was the director of Coal River Mountain Watch (CRMW) and has been called "the godmother of the anti-mountaintop removal movement."

Judy Bonds, speaking to a crowd. 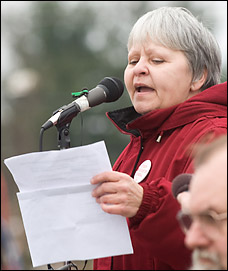 Julia "Judy" Bonds (August 27, 1952 – January 3, 2011) was an organizer and activist from the Appalachian Mountains of West Virginia. She worked from an early age at minimum wage jobs. Bonds was the director of Coal River Mountain Watch (CRMW) and has been called the godmother of the anti-mountaintop removal movement.

Julia Bonds was born into a coal mining family on August 27, 1952, in Marfork, West Virginia. She lived most of her life in Marfork hollow, as generations of her family did before her and made a modest living working in restaurants and convenience stores.

In 1990, Massey Energy Company began blasting near her home and the air became filled with dust. Bonds discovered that Marfork was one of many West Virginia hollows dealing with the effects of mountaintop mining, and became a leading voice of the grassroots resistance to mountaintop strip mining. Bonds testified against Massey at regulatory hearings, filed lawsuits against surface mining and led protests against the company. She became a volunteer with and then executive director of Coal River Mountain Watch (CRMW), a local grassroots group.

While Bonds was the last remaining holdout living in Marfork, she eventually moved away from her home due to the effects of mountaintop mining.

By 2003, Bonds had led the CRMW into a partnership with the United Mine Workers Union to halt mining companies' dangerous use of overweight coal trucks and to convince the state's mining oversight agency to better protect valley communities from mine blasting.

Her consistent message was that the health and safety of Appalachian’s poor were being sacrificed for the profits of energy companies. She shrugged off the argument that rural people needed the jobs of the coal industry.

"If coal is so good for us hillbillies," she said at a 2008 Appalachian Studies Association conference, "then why are we so poor?"

For years, she dreamed of a "thousand hillbilly march" in Washington, DC. In September 2010, that dream became a reality as thousands marched on the White House for "Appalachia Rising,” a mass movement to persuade US Congress to halt to the issuance of valley fill and other types of permits that allow companies to completely remove a mountain top in the search for coal.

She was awarded the Goldman Environmental Prize in 2003, for leading the fight against the mining practice called mountaintop removal mining in the Appalachian mountain range. At that time, Bonds was earning $12,000 a year at her job as an activist when, in 2003, she was awarded the prestigious $125,000 prize. After paying for her grandson's braces, helping her daughter buy a car and paying off the family's mortgage, Ms. Bonds donated nearly $50,000 to Coal River Mountain Watch (an amount equal to the organization's annual budget).

"Judy endured much personal suffering for her leadership. While people of lesser courage would candy-coat their words or simply shut up and sit down, Judy called it as she saw it. She endured physical assault, verbal abuse, and death threats because she stood up for justice for her community."