Built in 1936 as one of the last Art Deco style theaters, this site is a prime example of popular theater style in the 1930s. The architect is so significant that the Smithsonian Institute has ranked it fifth in the nation for its architectural value. Architect B. Marcus Priteca was responsible for designing the theater. Although it was ready for opening in 1931, the theater remained closed until 1936 due to the Great Depression. The Washoe Theater was listed on the National Register of Historic Sites in 1982. 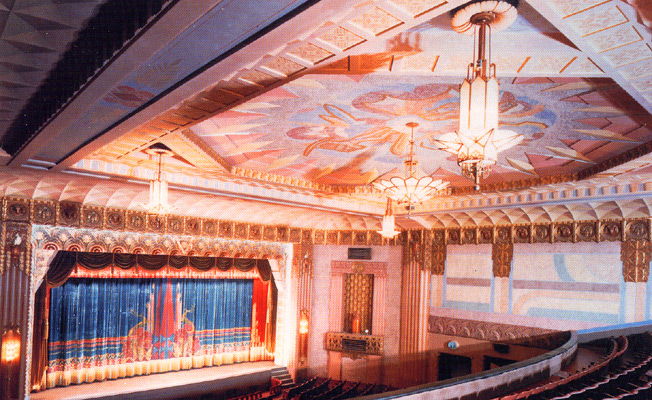 The site of the Washoe Theater was a previous site to two other theaters in Anaconda. Those two theaters were The Margaret Theater, which existed since the founding of the town and remodeled in 1927, and the Sundial Theater, which burned down in 1929. An architect by the name of B. Marcus Priteca was the one who built the theater. Priteca had a reputation of work in his field designing places like the Seattle Coliseum and the Pantages Theaters in California. Interior decoration of the theater was supervised by Nat Smythe, who had help completing the interior murals.

The Washoe Theater was built at a time where motion picture films had hit their peak in the 30’s. Several Art Deco movie theaters had been built around the country, but some were destroyed making this place one of the last few standing. The whole cost of building this movie theatre was $200,000. It was set for opening in 1931, but it’s opening had to be postponed since America was going through the Great Depression. The theater officially opened up in 1936.

The first movie to ever be showed in this theater was a Western movie. The movie was called The Texas Rangers starring Fred MacMurray. It still operates as a movie theater in Anaconda today. The Washoe Theater was put on the National Register of Historic Places in 1982. The Smithsonian Institute ranked it fifth in the nation for the architectural style it was built with.