Dedicated on June 10, 2006, the United States War Dogs Memorial is located at the gateway to the New Jersey Vietnam Veterans’ Memorial in Holmdel, New Jersey. The monument consists of a bronze statue of a kneeling American soldier of in Vietnam next to his dog on a Black granite base. The U.S. War Dogs Memorial, while directly representing the War Dog Teams of the Vietnam War, honors all our nation’s war dogs and their handlers – past, present and future.

Statue at the entrance of the Wardog Memorial 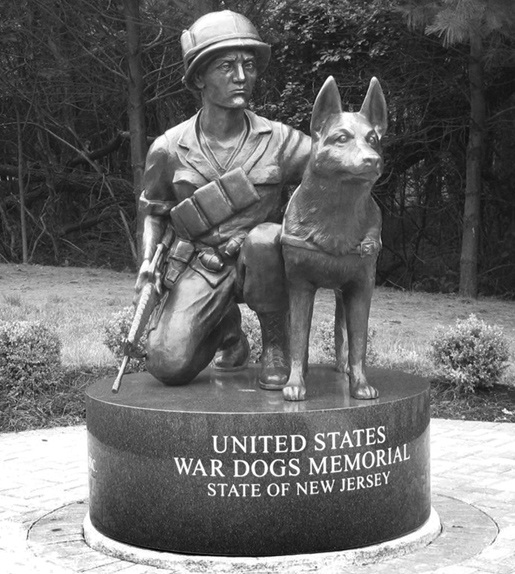 he memorial was designed by sculptor Bruce Lindsay, Architectural Division Manager at Johnson Atelier in Mercerville, New Jersey. A graduate of Bucknell University, Lindsay’s studio is adjacent to Grounds for Sculpture, the 22-acre sculpture park on the grounds of the former New Jersey State Fair.

The use of dogs in battle dates back centuries. For example, Roman soldiers trained dogs and covered them with mail armor and spikes before sending them in columnns to attack members of the opposing forces. This tactic continued in various forms while commanders such as Napoleon used the dogs to alert him of enemy movements owing to their superior senses of smell and hearing. For example, Napoleon's used dogs as audible pickets, with their barks signaling the approach of a potential enemy soldier. Dogs were also placed inside buildings with sensitive materials to attack potential intruders.

The use of the dogs in battle continued throughout both World Wars and dogs are used in a variety of military operations in modern times. From detecting explosives and drugs to aiding those who have been mentally and physically wounded in the war, working dogs remain an important part of the U.S. Military.