This white marble monument, erected in 1868, is the oldest Confederate monument in North Carolina. Its design is simple: a white columnn with a cross on top and an inscription on the base. It stands in Cross Creek Cemetery, in memory of the Confederate dead. Construction of the monument was funded by a group of local women, who held a quilt raffle to raise $300. This structure represents North Carolina women's early efforts to commemorate the Confederacy, to ensure that their values were preserved despite losing the Civil War, and to assert their status as "good" women--loyal, virtuous, and white. 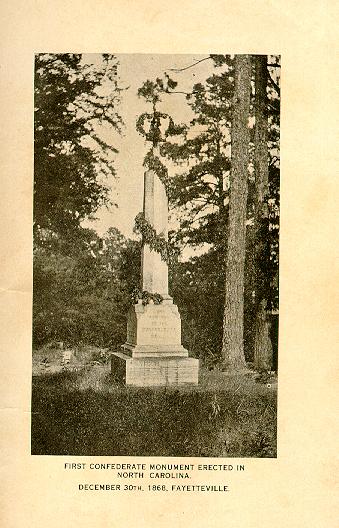 "Nor shall your glory be forgot, / While Fame her record keeps, / Or honor points the hallowed spot / Where valor proudly sleeps." /

J.E.B. Stuart Chapter, United Daughters of the Confederacy. War Days in Fayetteville, North Carolina: Reminiscences of 1861 to 1865. Fayetteville, NC: Judge Printing Company, 1910. http://docsouth.unc.edu/fpn/chapter/chapter.html.  © This work is the property of the University of North Carolina at Chapel Hill. It may be used freely by individuals for research, teaching and personal use as long as this statement of availability is included in the text.