Duke University Chapel was constructed between 1930 and 1932 under architect Horace Trumbauer and chief designer Julian Abele, both from Pennsylvania. It hosted its first Commencement in 1932 and was dedicated in 1935. The building is neo-Gothic, inspired by English cathedrals. It serves as an interdenominational Christian church and is one of the best-known examples of Collegiate Gothic architecture.

Duke University Chapel is the university's most prominent and well-known landmark. 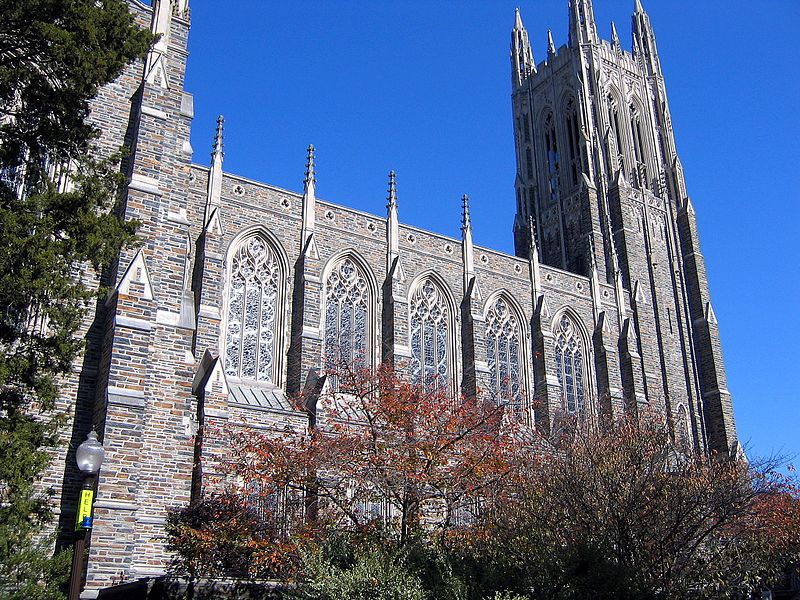 Features of Gothic architecture include: pointed arches, ribbed vaults, and flying buttresses. The chapel has several modifications from traditional Gothic. For example, the building uses steel trusses rather than wooden ones, which lowers the risk of fire and takes additional pressure off the walls, leading to smaller flying buttresses. The chapel exterior is made of Hillsborough bluestone, a volcanic stone from a quarry in Hillsborough, NC. The tower, which stands 210 feet tall, is based on Canterbury Cathedral's Bell Harry Tower.

Sculptures above the portal depict prominent Methodists such as John Wesley (1703-1791), founder of Methodism, and Thomas Coke (1747-1814), a Methodist missionary and bishop. Other exterior statues include Martin Luther (1483-1546), John Wycliffe (1324-1384), Thomas Jefferson (1743–1826), and, formerly, Robert E. Lee (1807–1870).  The Lee statue was removed in 2017 following the violent white nationalist rally in Charlottesville, Virginia. According to Duke president Vincent Price, "It was clear that a lot of attention was being given to the statue and that the issues that had percolated for some number of years here on campus were rising with a new sense of urgency, and certainly with a heightened visibility" (quoted in Inside Higher Ed).

Inside, the pulpit and lectern are carved from Indiana limestone. The nave is large enough to accommodate about 1600 people. There are 77 windows in the chapel, illustrating various biblical figures and stories, such as the Revelation of St. John on the Isle of Patmos. Over one million pieces of glass were used in the windows' creation. The organ was made by Dirk A. Flentrop and installed in 1976.