This highway marker is located at the 38th Parallel -the same latitude that marked the partition of the northern and southern portions of Korea following the end of World War II. That partition became the border of North and South Korea following the Korean War, and this marker serves as recognition for West Virginians who fought in the Korean War. At the end of World War II, Japan no longer controlled Korea and the Allied powers decided to partition the Korean Peninsula pending a vote to reconcile the two sides into one new and independent nation. However, the military leaders on the northern side of the parallel decided to attack the southern section of Korea before that vote, leading to United States intervention. The United States left Korea in 1953 and the Demilitarized Zone (DMZ) was set as a border between North and South Korea at the 38th Parallel. 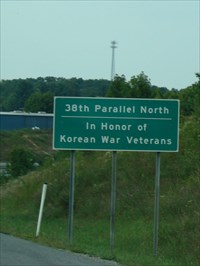 38th Parallel Memorial sign with Veterans of All Wars Bridge in the background. 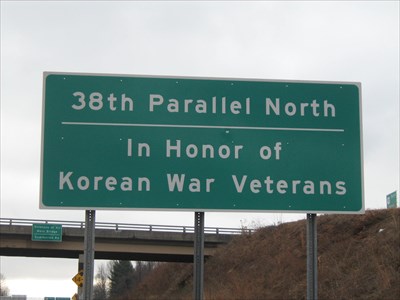 Veterans of All Wars Bridge highway sign that overlooks the 38th Parallel. 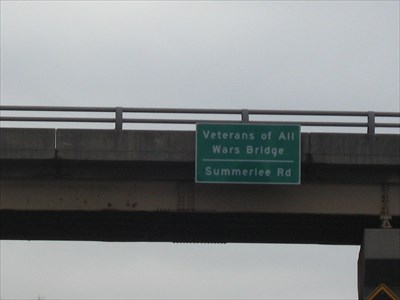 From 1910 to the end of World War II Japan had controlled the Korean peninsula among other colonies that were taken by force.  At the end of World War II in 1945, it was decided at the Cairo Conference which occurred November 22-26, 1943, that Japan would lose the colonies taken since the beginning of World War II and they would be returned to the Republic of China or made independent in the case of Korea. Shortly after the Cairo Conference, the Tehan Conference was conducted with Roosevelt, Churchill, and Stalin to discuss opening a second front against Germany and Allied operations in the Middle East and Japan. Continued postwar discussions to deal with the aftermath of war occurred at the Yalta Conference and later the Potsdam Conference in 1945 which outlined the terms of Japan’s surrender. The agreement specified that the number of Japanese-controlled islands would be limited, leaders who influenced world conquest would be removed, and lastly that obstacles opposing Japanese citizen’s free rights would be removed. As Soviet forces moved in Japan August 8, 1945, the United States began occupying the southern half of Korea to prevent the communist takeover, choosing the 38th parallel as their territory since it divided the country approximately in half.

For the Soviet Union, they accepted the agreement that they could occupy Korean territory from the 38th parallel north and began amphibious landings August 14, 1945. By the end of the Moscow Conference in December 1945, the Allied forces would all take part in the oversight of Korea for the next five years until it was established enough to operate independently. The United States and the Soviet Union attempted to create a unified administration for the country, but attempts failed as Cold War tensions increased. Both entities attempted to establish government control with the South standing by the Republic of Korea under Syngman Rhee and the North establishing the Democratic People’s Republic of Korea under Kim Il-sung in 1948. From 1948 on, the conflict between political parties lead to numerous rebellions and eventually military action leading into the Korean War.

In the period from 1948 to 1950, there were small conflicts along the 38th Parallel. In 1950, however, a state of war existed after the North Korean Army invaded South Korea. The conflict favored the South and the United Nations forces as they pushed north until the coalition forces encountered a large Chinese force that resulted in the retreat of coalition troops below the 38th parallel. Fighting continued with little gains made on either side in what appeared as a stalemate. By 1953, the Korean Armistice Agreement was signed ending the conflict but not the tension in the area.  There now exists a demilitarized zone at the 38th parallel which was placed to prevent further conflict between the North and the South and reflects the position of the opposing forces when the armistice was signed.