The Trumans in Washington

This exhibit includes original artifacts from the White House as it shares the history of Truman's time in office, a period that coincided with a complete renovation of the building. 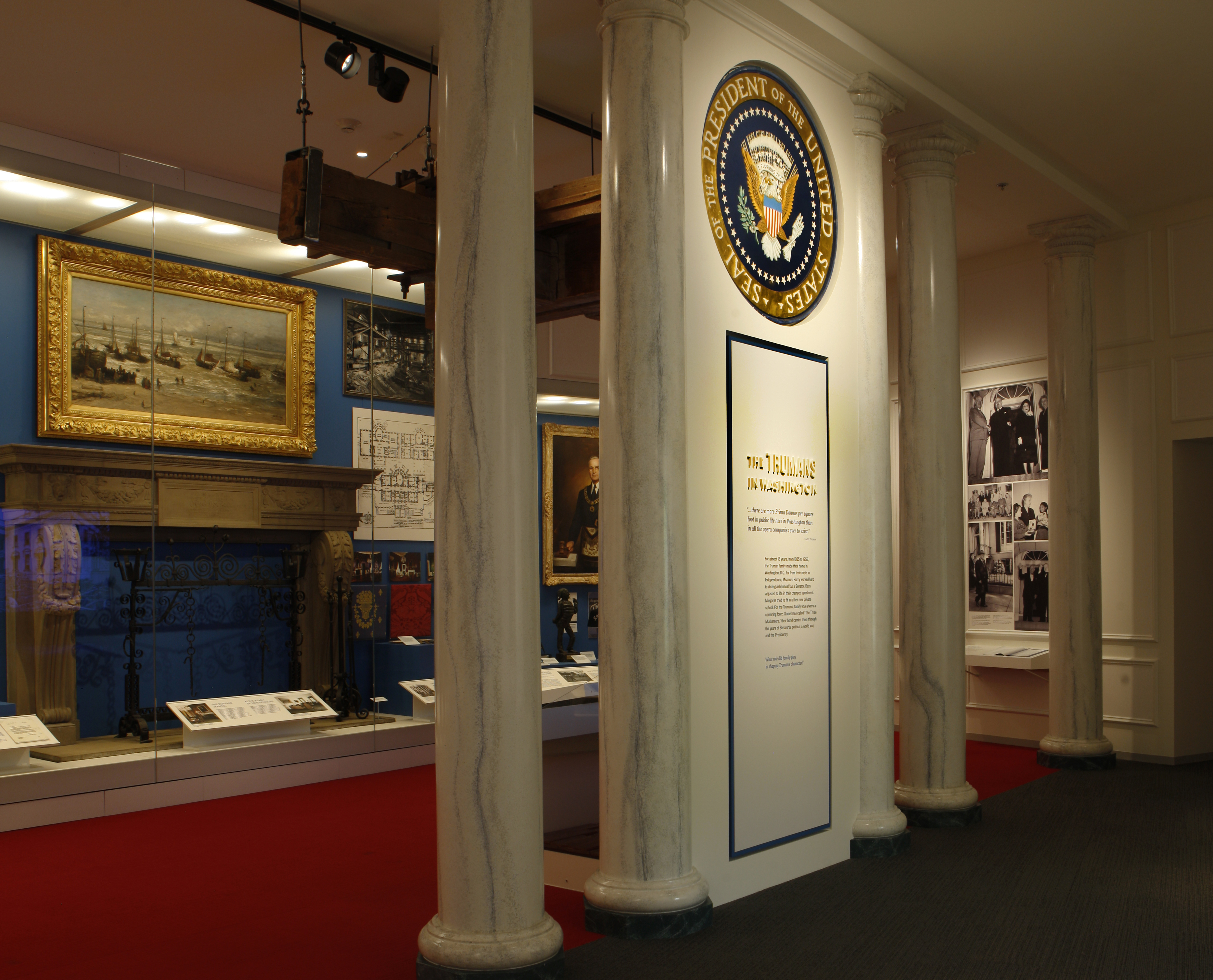 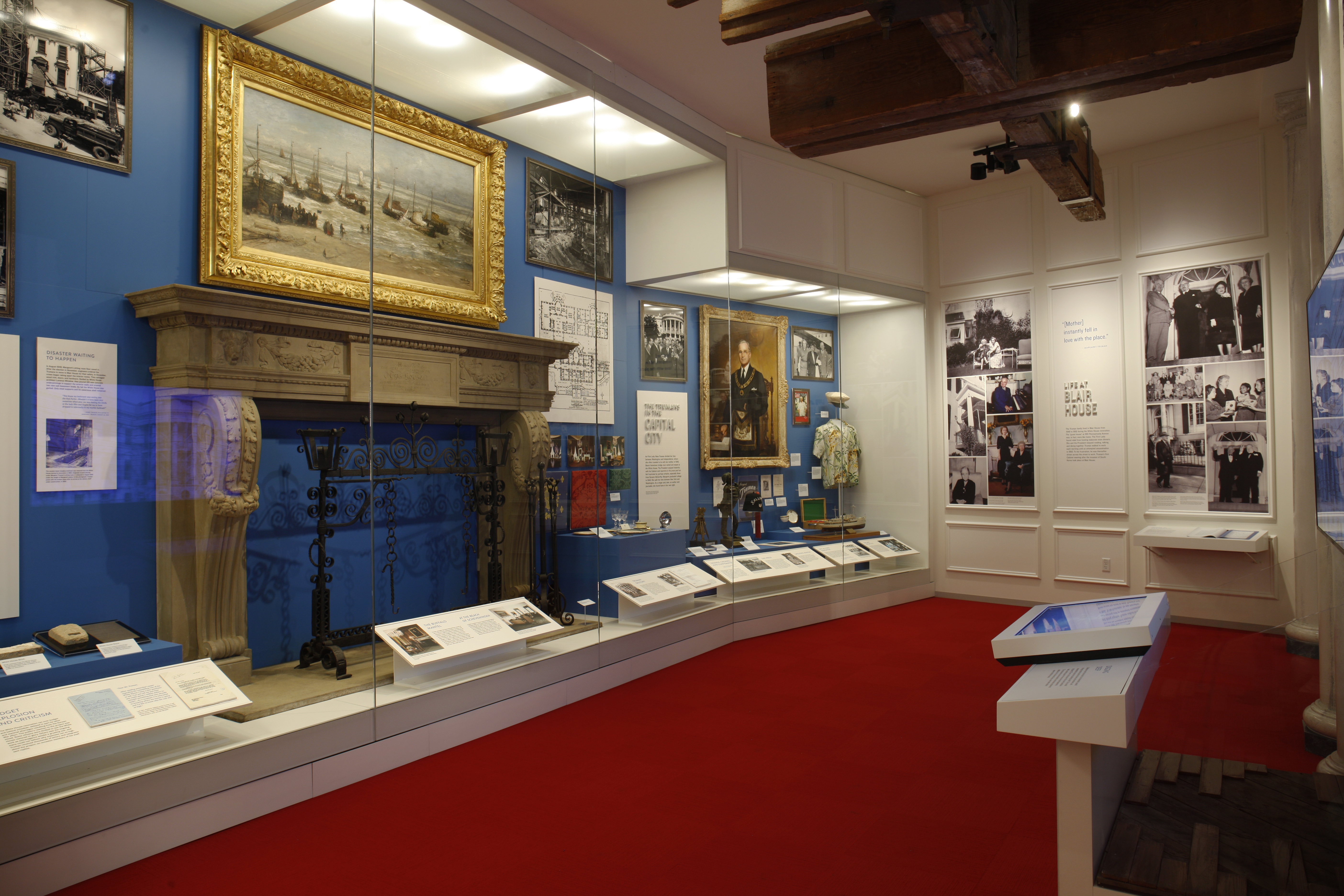 For almost eighteen years, from 1935 to 1953, the Truman family made their home in Washington, D.C., far from their roots in Independence, Missouri. Harry Truman worked hard to distinguish himself as a Senator. Bess adjusted to life in their cramped apartment. Margaret tried to fit in at her new private school. For the Trumans, family was always a centering force. Sometimes called “The Three Musketeers,” their bond carried them through the dizzying events of senatorial politics, a world war, and the presidency.

Truman called his decade in the Senate his “ten happiest years.” He relished the work and comradery. He also swiftly earned access to the “the Club” — the Senate’s inner social circle. Bess and Margaret explored the Capital and navigated its new social demands. Senator Truman called Bess “the Boss.” He sought her council on nearly all matters. She worked alongside him in the office, answering mail and later editing Truman Committee reports. Bess and Margaret split their time between Washington and Independence. While apart, the family wrote letters revealing private jokes, insights and observations of the widening world around them.

Making a Home in the Great White Jail

When the Trumans moved into the White House in 1945, they were shocked to find it falling apart. Bess went to work, hoping fresh paint and new curtains would improve morale. When she and Margaret were in town, the Trumans read, played the piano and talked most evenings. Yet with his family in Independence half the year, Truman was often lonely. He buried himself in work. Late at night, the creaks and groans of the aging White House conjured up thoughts of past presidents who had roamed the same rooms. His fascination with White House history guided him later when major repairs became an urgent necessity.

Harry Truman revered the office of the President. He worked hard to strengthen presidential power for his successors. He also reorganized the Executive branch to better meet the challenges of the modern world. To do this he had to know how the presidency fit into the framework of government as set out in the Constitution. Truman was a lifelong student of history and government. Unlike his predecessor Franklin Roosevelt, who reveled in ad hoc personal decision-making, Truman preferred a more organized and streamlined process. He delegated when possible and took advice in a more open system of decision-making.

This wood and glass desk sign is one of President Truman’s most well-known trademarks. Its saying comes from an old poker game expression “pass the buck,” meaning to give responsibility to someone else. Truman believed a President must be decisive and accountable, and the buck stopped with him.

This sign was made at the federal reformatory at El Reno, Oklahoma. It was a gift from the warden at the suggestion of Truman’s long-time friend Fred Canfil. Truman received it in October 1945. He referred to it periodically to emphasize a president’s ultimate responsibility to make decisions.

Inside the Oval Office

This replica of President Truman’s Oval Office is decorated exactly as the original was on August 28, 1950. In an age when television broadcasts from the White House were rare, the office was decorated more for personal taste and practicality than as a showcase. The center of the room was open, in part, to allow for large numbers of reporters during press conferences.