Marker at the base of the Flag Staff. 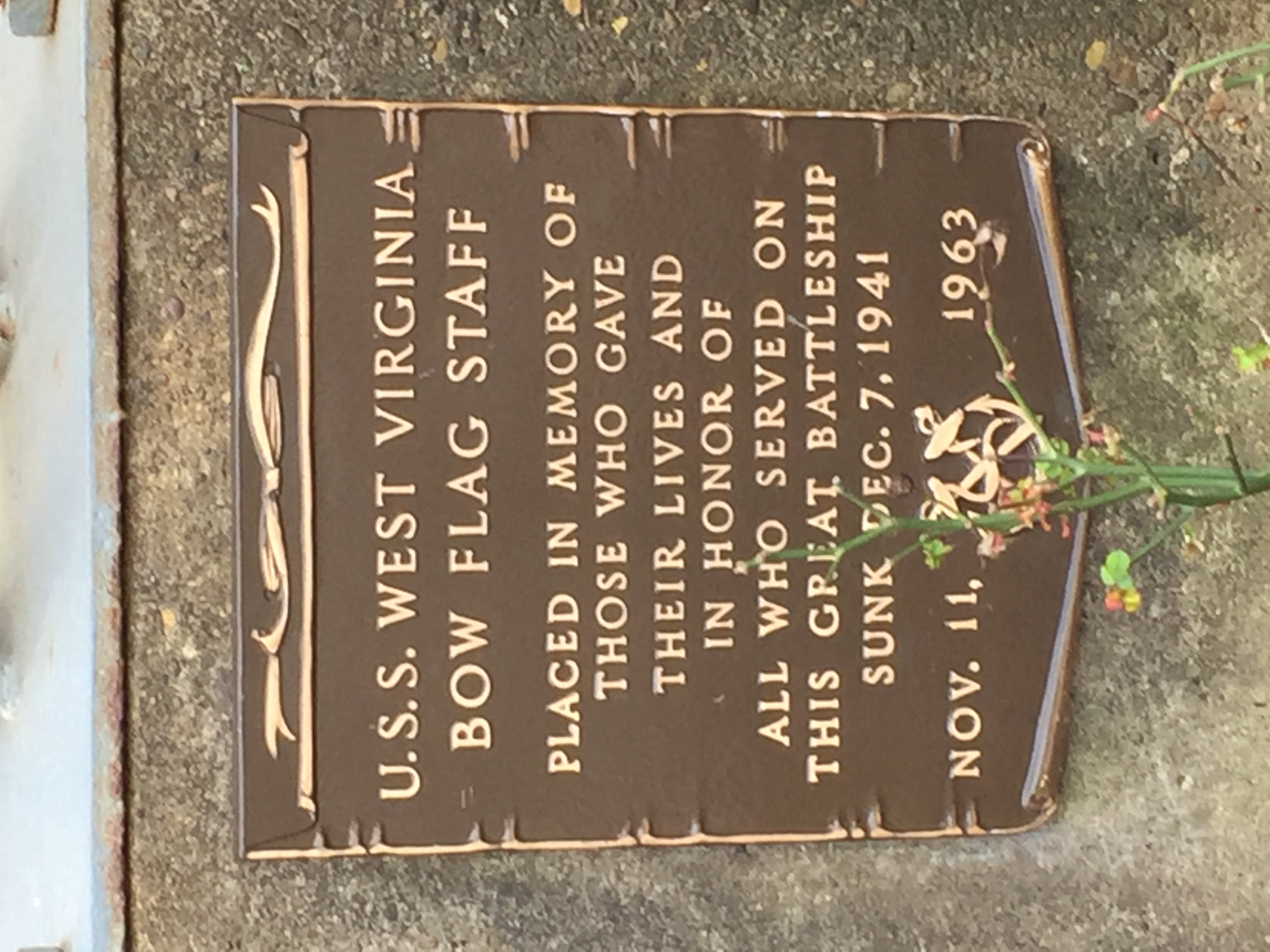 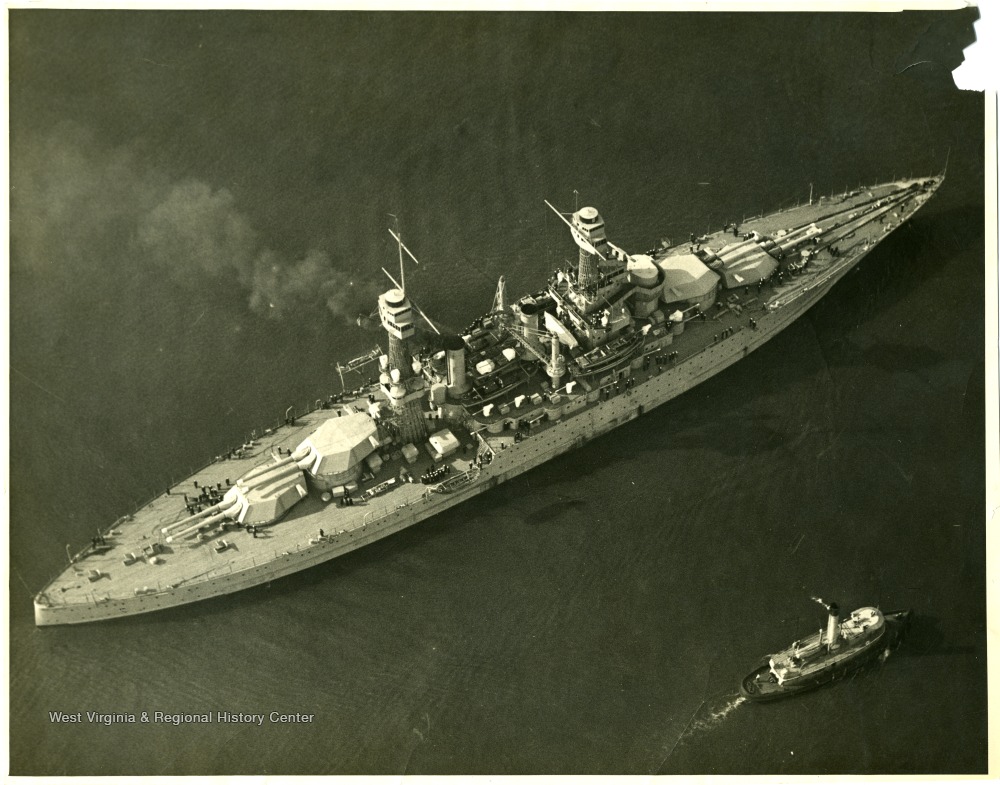 The USS West Virginia before World War II and the Battle at Pearl Harbor.

After Pearl Harbor, the U.S.S West Virginia was raised and rejoined WWII. This photo was taken somewhere in the Pacific Ocean ca. 1945, near the end of the conflict. 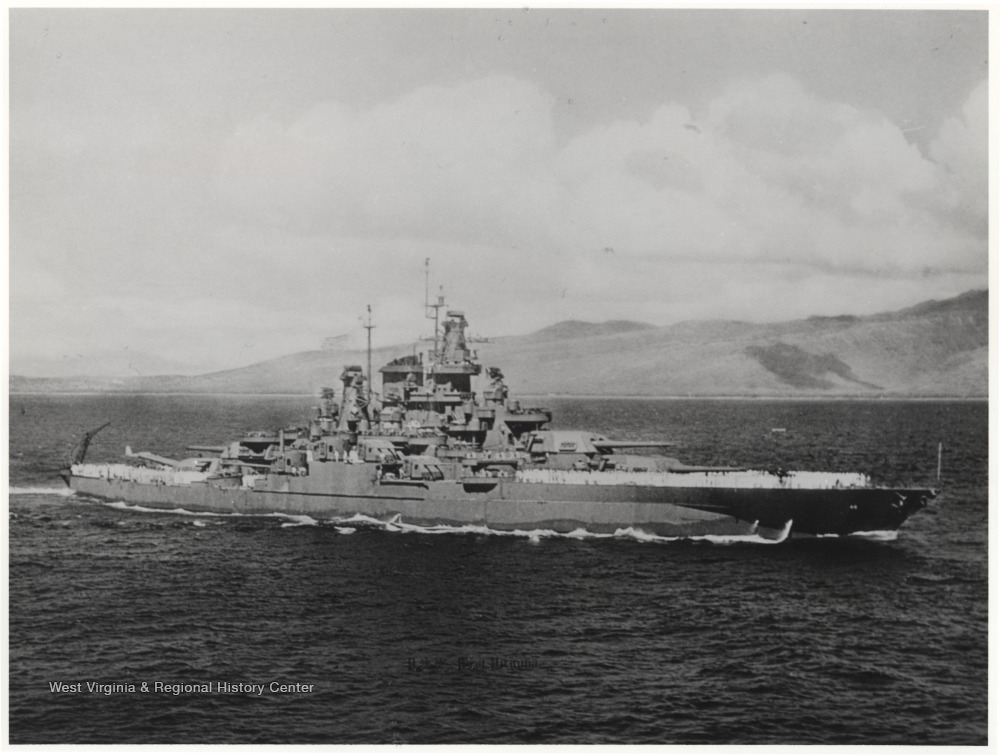 The USS West Virginia was built by the Newport News Shipbuilding Corporation in 1920. It was launched on November 19, 1921 and commissioned on December 21, 1923. The Colorado class Battleship was the fifth built in this series for the US Navy. The Battleship was 624 feet in length and could achieve a speed of 21 knots. It could hold a crew of 1,407 sailors. The USS West Virginia was a product of the latest knowledge of naval architecture.

On December 7, 1941 the USS West Virginia was moored at Pearl Harbor with forty feet of water below it beside the USS Tennessee. At a little before 8:00 a.m. that morning, Japanese planes began bombing the American Naval Fleet at Pearl Harbor. The USS West Virginia took five torpedo hits to its port side and two armor-piercing bombs. The first of the bombs struck the superstructure deck, destroying the port casements and causing the deck to collapse to the galley deck below it. The galley deck caught fire as well as four casemates and the ready-made projectiles that were stored in the casemates detonated. The second bomb hit the floatplane that sat at the top of Turret II knocking the one below it onto the deck. Though this bomb proved to be a "dud", the gas tank on the float plane cause fire causing damage.

The quick thinking and actions of Lt. Claude V. Ricketts, the assistant fire control officer, saved the USS West Virginia from capsizing like the USS Oklahoma. Many instances of heroic actions took place on board the damaged battleship. The commanding officer, Captain Mervyn S. Bennion became mortally wounded when a bomb fragment hit him in the abdomen from a bomb that hit the USS Tennessee spraying fragments across the USS West Virginia. Though mortally wounded, he continued to perform his duties clinging to life until the ship was abandoned. The USS West Virginia was abandoned and sank, landing on an even keel on the harbor bottom. Volunteers returned to the battleship after it was abandoned to try to put out the fires that raged on board. It was the following day, December 8, 1941 before they were able to extinguish the fires with the help of YG-17, a garbage lighter that stayed alongside the battleship even though there was the danger of ammunition exploding.

On May 17, 1942 they were able to patch the hull of the battleship and pump out the water so that it would float again. While in drydock, it was discovered that the USS West Virginia had taken seven torpedoes instead of six. While making repair, the workers located 70 bodies of USS West Virginia sailors that had been trapped below when the ship had sank. More disturbing was the discovery of a calendar in a compartment with the days to December 23, 1941 marked off reveling that at least some of those sailors had still been alive on December 23.

The battleship was repaired and refitted, then returned to duty and the Hawaiian Islands in 1944. It served in several major battles after its return and was in Tokyo Bay in September 1945 for Japan's formal surrender. It helped to return soldiers, sailors, airmen, and marines back to the states after the war ended. The USS West Virginia was decommissioned on January 7, 1947 and ultimately sold for scrap metal on August 24, 1959. Several ship parts were donated to various cities and entities in West Virginia. The bow flagstaff of the ship was installed in Clarksburg on November 11, 1963.

"Welcome to the website for the Battleship USS West Virginia," Retrieved February 18, 2017, http://www.usswestVirginia.org/