Dedicated in 1913, this monument to Confederate soldiers stands before Warrenton's courthouse. The monument consists of a stone obelisk topped by a bearded soldier. This monument and its dedication demonstrate the efforts of the United Daughters of the Confederacy to vindicate the South and promote the myth of the "Lost Cause" of the Confederacy in the early 20th century. Dedication speeches lauded the soldiers as noble heroes for the defense of "Anglo-Saxon" civilization.

"Unveiling of Confederate Monument," in the Warren Record, 24 October 1913. 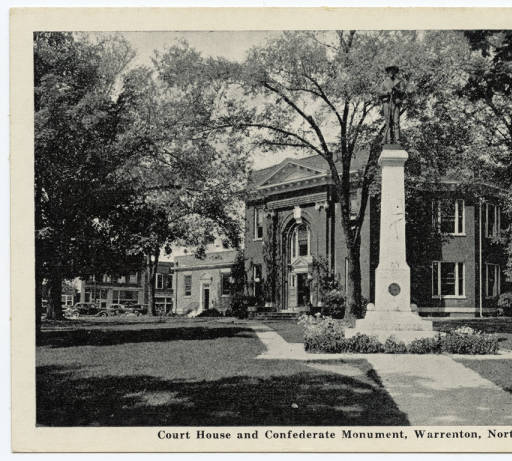 The United Daughters of the Confederacy and Sons of Warren sponsored the monument's construction. As the minutes of the United Daughters' convention report: "$3000 has been raised by the efforts of our Chapter for the erection of a Confederate monument on Court House Square in Warrenton...As usual, Memorial Day and President Davis' birthday were observed with appropriate exercises and a bountiful dinner served the veterans."

The Warren Record looked forward to the monument's 1913 dedication ceremony as sure to be an occasion "of great joy." The ceremony featured a parade and brought in soldiers and veterans, children and Boy Scouts, and prominent North Carolina figures like former governor Robert Glenn, who gave a speech. As Douglas Butler writes, the festivities were meant to celebrate both the Confederacy and the institutions and ideas of the antebellum South.