View of one of the beaches at Bahia Honda. 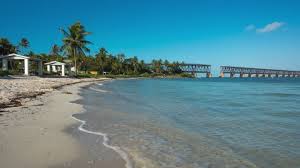 View of the old railway bridge. 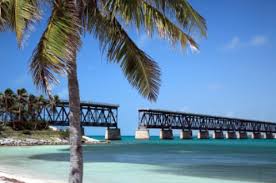 View of the water from the old railway bridge walk. 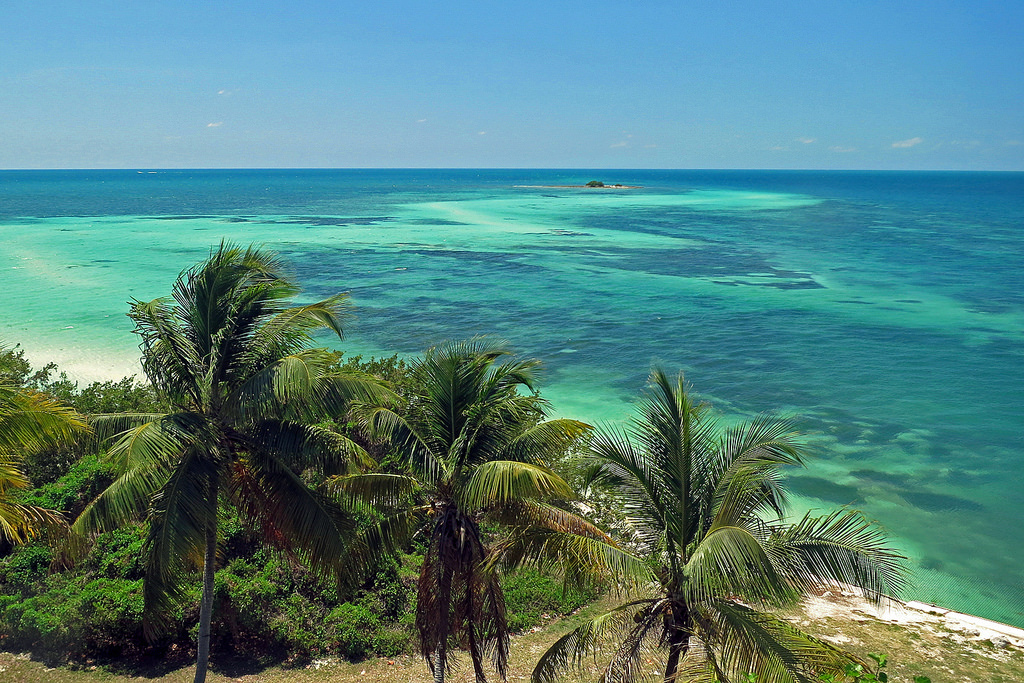 Bahia Honda State Park located at 36850 Overseas Highway (Mile Marker 37) Big Pine Key, FL 33043. This state park has some of the best beaches in the Florida Keys as well as The Bahia Honda bridge that was built by Henry Flagler as part of his Florida East Coast Railway Extension. The bridge and the railway were completed in 1912. Flagler used it to entice tourists to visit the state and spend money. He invested heavily in this railway as well as hotels and other building projects through out the state. Funding these projects with his own money.
Bahia Honda means deep bay. This site was the hardest for Flagler to build a bridge over the ocean in. The channel here has varying depths that get up to 35-feet deep. Even though this was the hardest for his engineers Coe and Krome to build the expanse it covers is a short distance of a little more than one mile stretching from Bahia Honda to Spanish Harbor Key. This bridge, because of the depth of the channel, had to be constructed differently from all the others they had done to connect the rest of the world to Key West.
The engineers had learned from previous experiences with hurricane force winds that the pilings to anchor the bridge had to be one foot for every foot of water below, which meant Bahia Honda would also be the tallest. They used a combination of techniques that they used to construct previous bridges such as the Seven Mile Bridge. Steel construction was also used making this bridge not the prettiest, but the strongest on the road to Key West.
The bridge still stands today even though some of it has been removed and can be viewed by taking a short walk at Bahia Honda Park to a look-out area. When you are up there it is easy to see how the construction has stood the test of time even without proper care. The Bahia Honda bridge was even used for car traffic after the rail line went bankrupt in 1932. The state of Florida  bought it and converted it to The Overseas Highway which was completed in 1938. Because of the sturdy construction of the bridge and the fact that it would cost too much money to widen the interior of the bridge where the trains passed, the state put concrete on top of the steel trusses. In 1980 this bridge stopped being used for automobile traffic because a newer bridge was constructed north of the old bridge.
The Florida Keys are surprisingly not known for their beautiful beaches despite being surrounded by water. The Keys are made of limestone which doesn’t create the typical pretty sandy beaches we are used to seeing in most parts of Florida. Bahia Honda state park is home to two award winning beaches, Sandspur beach and Calusa Beach. The entire island of Bahia Honda which is over 292 acres is owned by the Florida State Park service.
Bahia Honda is a wonderful gem to stop and visit on your drive to Key West. It boasts beautiful beaches as well as a short walk to view a marvel of engineering from the 1900’s in the old railway bridge. You can easily stay for a day or an hour or two.

Standiford, Les. Last Train to Paradise: Henry Flagler and the spectacular rise and fall of the railroad that crossed the ocean. New York: Crown Publishers, 2002. Print.

The park is open from 8:00 a.m. until sundown, 365 days a year. There are admission fees to get into the park.