The wood-framed Northern Pacific Railway depot opened in 1881 and served as the gateway to Cheney for passengers and freight through the first World War to 1929.

Postcard of Cheney's Northern Pacific Railway Station circa 1910. The postcard is addressed to Mr. Alex G. Watt of Cheney and identifies Floyd Watt as man 2nd from right. It is postmarked at Cheney on Feb. 2, 10am 1910 and has a 1 cent stamp. 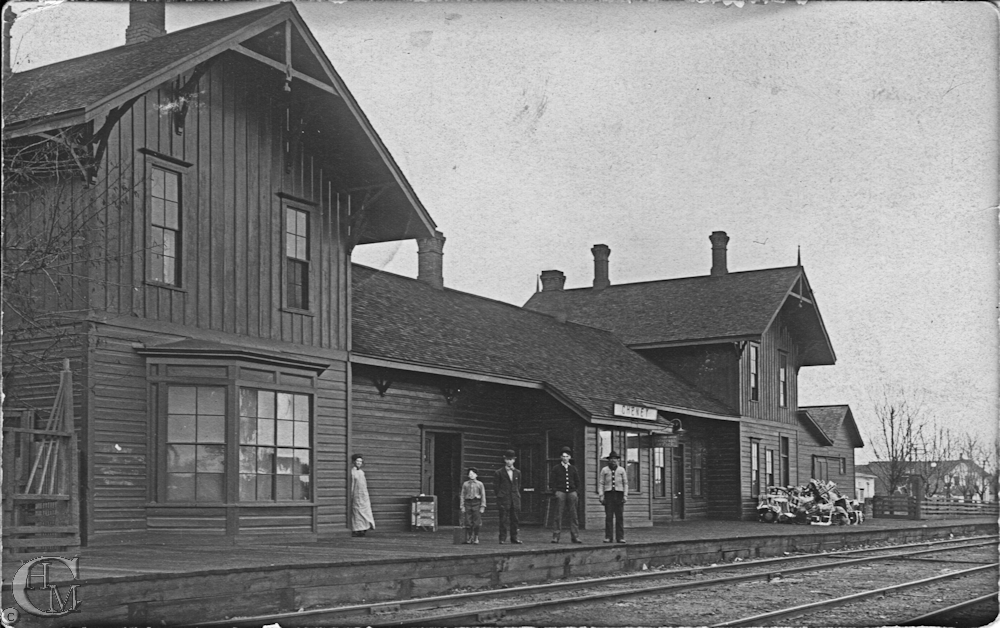 Early image of the depot with a wood burning locomotive, dating the image to most likely prior to 1890.

1884 drawing depicting the depot, at right, and the Northern Pacific Railway freight depot on the left.

The track bed for the Northern Pacific Railway Company line from Ainsworth on the Colombia River to Spokane Falls was graded through Cheney July 1880. As track laying operations advanced on Cheney in May 1881, Supervisor S.V. Stevens forcefully requested that the town keep its saloons closed while the track laying gang came through. Cheney’s Northwest Tribune newspaper reported on May 13, 1881, Saloons will close while the track laying work progresses through Cheney in obedience to the request of Mr. Stevens, supervisor of track laying, with the support of General John W. Sprague.

Track laying reached Cheney on Wednesday, May 25, 1881, with many of the townsfolk coming out to watch. It was a skeleton track capable of supporting the construction trains.

At the same time that spring, a wood framed depot was hastily constructed at the foot of E Street [College Ave]. The first passenger train arrived in July 1881, the depot was framed, but incomplete.

The route from Spokane Falls down to the Columbia River was slowly shored up and improved. In August 1881 it took 12 and a half hours to make the 149 mile journey; a year later travel time had been cut to 8 and a half hours. The following year, the 358 mile trip from Cheney to Portland took slightly less than 24 hours.

The depot was the gateway into town, greeting Normal school students, businessmen, politicians, celebrities, and visitors. Students whose homes were in Spokane, might take the train home on Friday and return Monday morning. Notable figures such as temperance and suffrage advocate, Frances Willard and Elizabeth Cady Stanton came to speak, and famous preacher, Billy Sunday stopped at Cheney on several occasions. The annual May Day festival, started in 1910, brought growing crowds from Spokane and beyond. Politicians, such as Teddy Roosevelt and Woodrow Wilson made whistle-stops at Cheney. The depot also witnessed the hundreds of Cheney area men leaving to serve in the war in Europe  [World War I]. Clubwomen gave departing soldiers packets of paper and pencils to encourage them to write home to their families.

The hastily erected depot had detractors early on. There was no insulation in buildings in those days, and the depot was reportedly drafty and cold in winter with creaky floors, especially in the freight area that over time threatened to give way under the weight of the items. The businessmen of Cheney first began agitating with the Northern Pacific Railway in the teens for a new station. The railroad put all plans on indefinite hold at the outbreak of the war.

In the mid-1920s, the Commercial Club, under their president, A.H. Johnson formed a committee to work toward obtaining a new depot. They efforts resulted in the demolition of the old depot in April 1929. Its replacement still stands today.