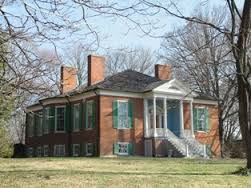 Farmington also has possible links to another U.S. president: Thomas Jefferson. Lucy’s family was friends with Jefferson and there is some evidence that he might have helped design Farmington. The plans for the house were drawn up by Paul Skidmore, but they are remarkably similar to plans designed by Jefferson. The final product was a fourteen-room, Federal-style mansion. Recent work on the house has restored its original paint colors, wallpaper, and carpets. The house is furnished with antiques from the period. The interior also features carved mantles, glass details, and marbleized baseboards.