The Paris Brumfield Family Cemetery features the burial site of Paris Brumfield (1837-1891), a nationally known feudist best remembered for his role in the Lincoln County Feud. Mr. Brumfield was a Confederate soldier, distiller, logger, and storekeeper. John Brumfield (1870-1900), son of Paris and a Lincoln County feudist, is also buried in the cemetery. The cemetery is currently under consideration for designation on the National Register of Historic Places. Others buried in the cemetery include Ann (Toney) Brumfield (c.1838-c.1894), wife of Paris; Dollie Brumfield (c.1878-bef.1900), daughter of Paris; Moses Brown (c.1793-aft.1880), uncle to Mrs. Brumfield; and Letty (Gillispie) Brown (c.1804-aft.1880), aunt to Mrs. Brumfield.

Historical Marker for the Brumfield Family Cemetery in Harts, WV. 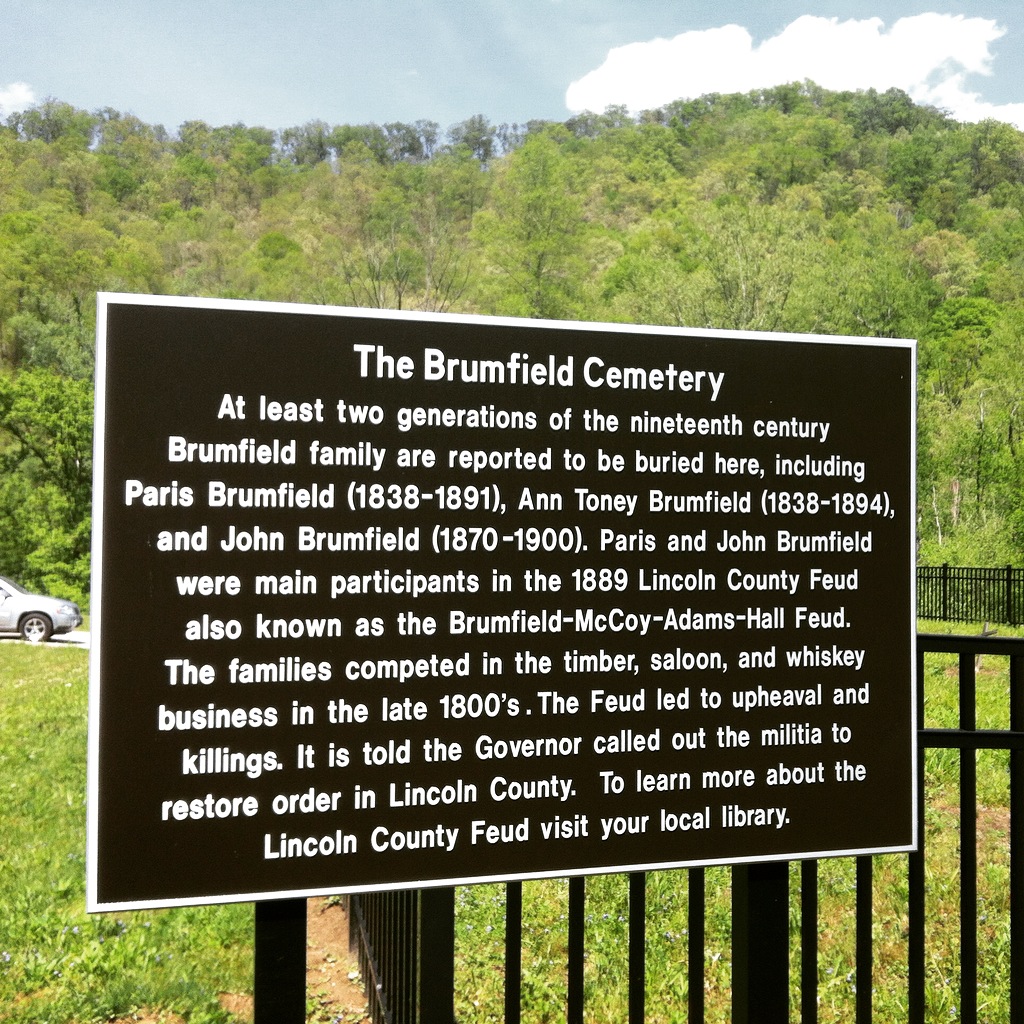 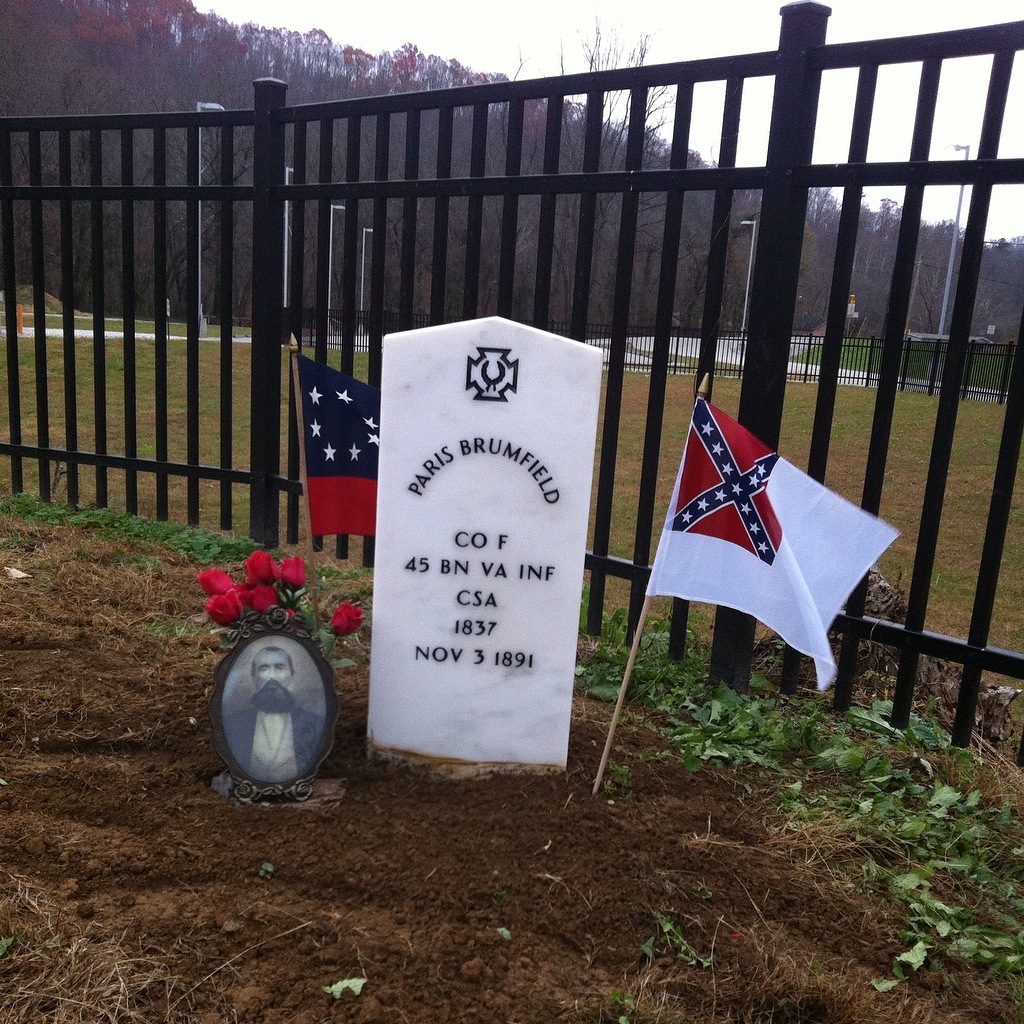 Ann (Toney) Brumfield Headstone. Funding for this headstone provided by a Benedum Foundation grant in 2002. 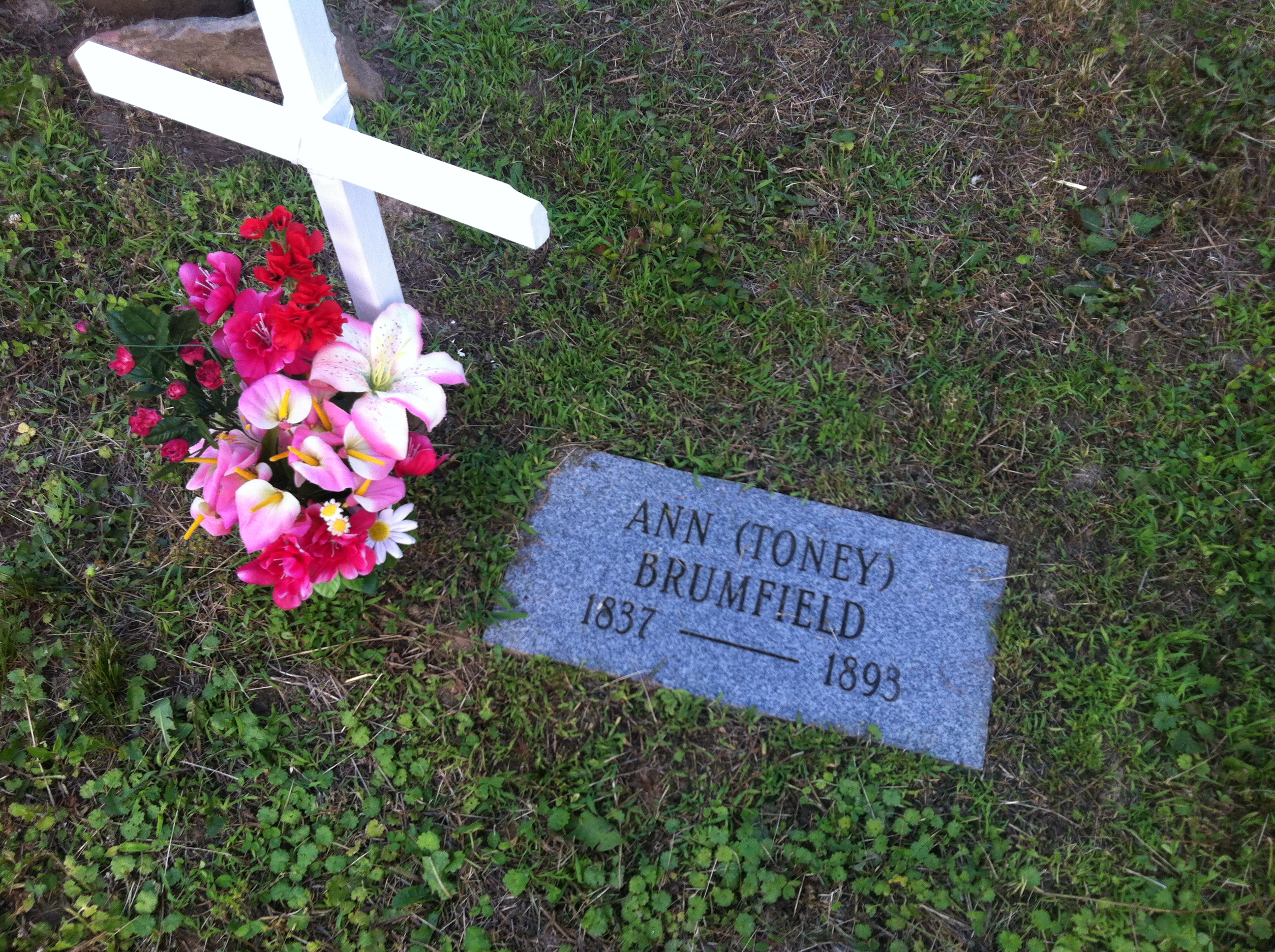 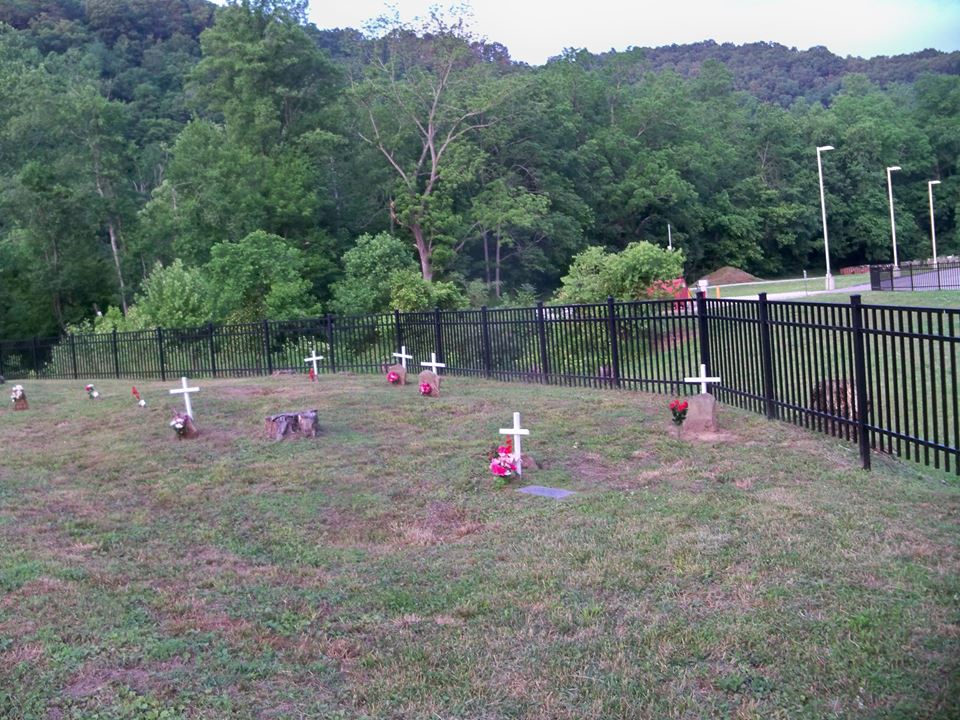 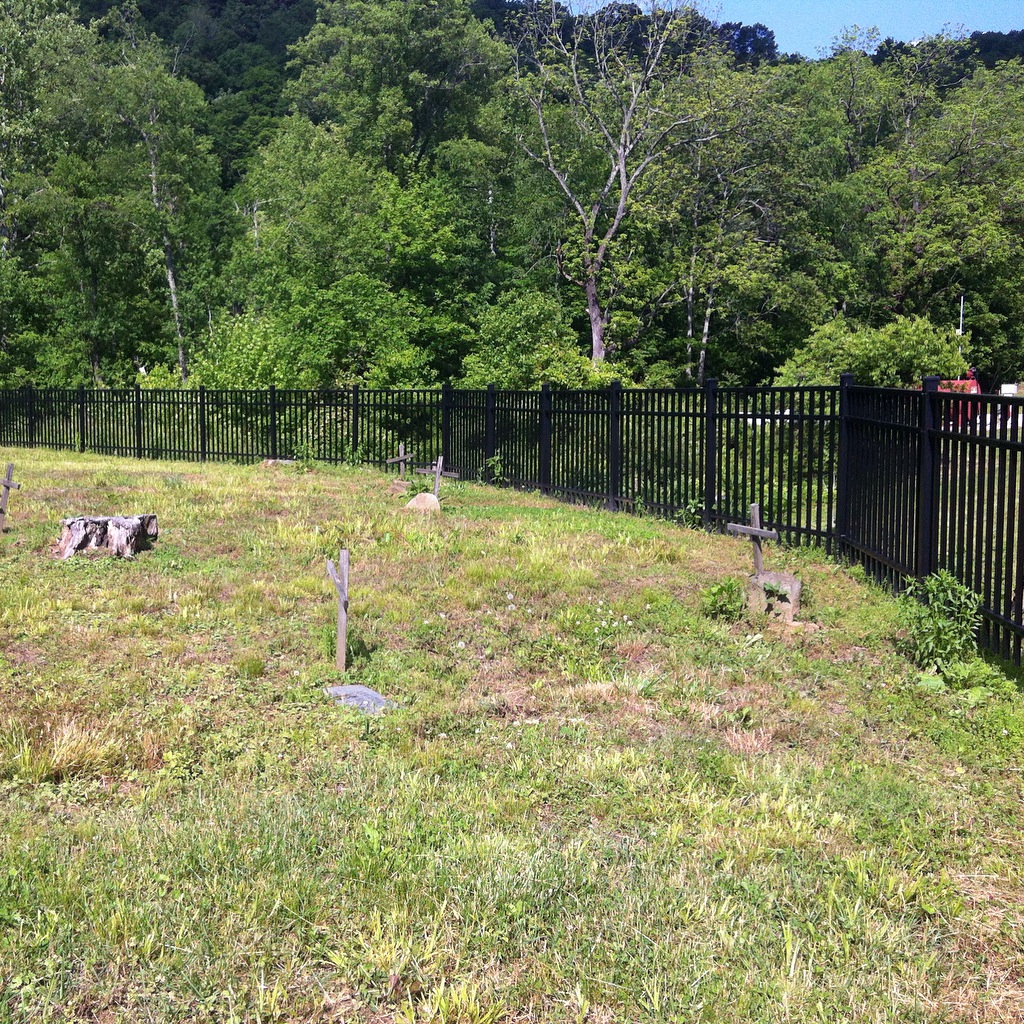 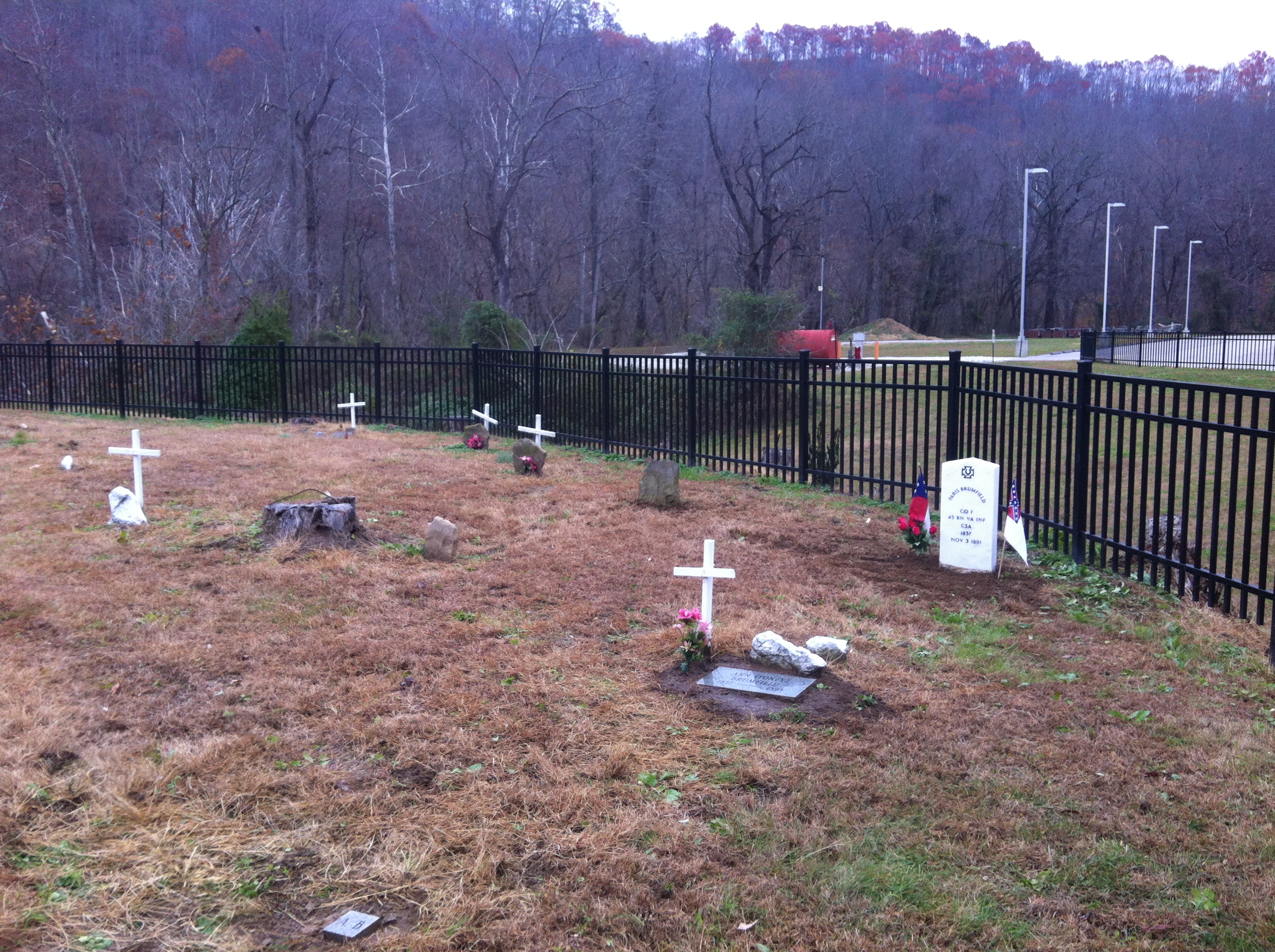 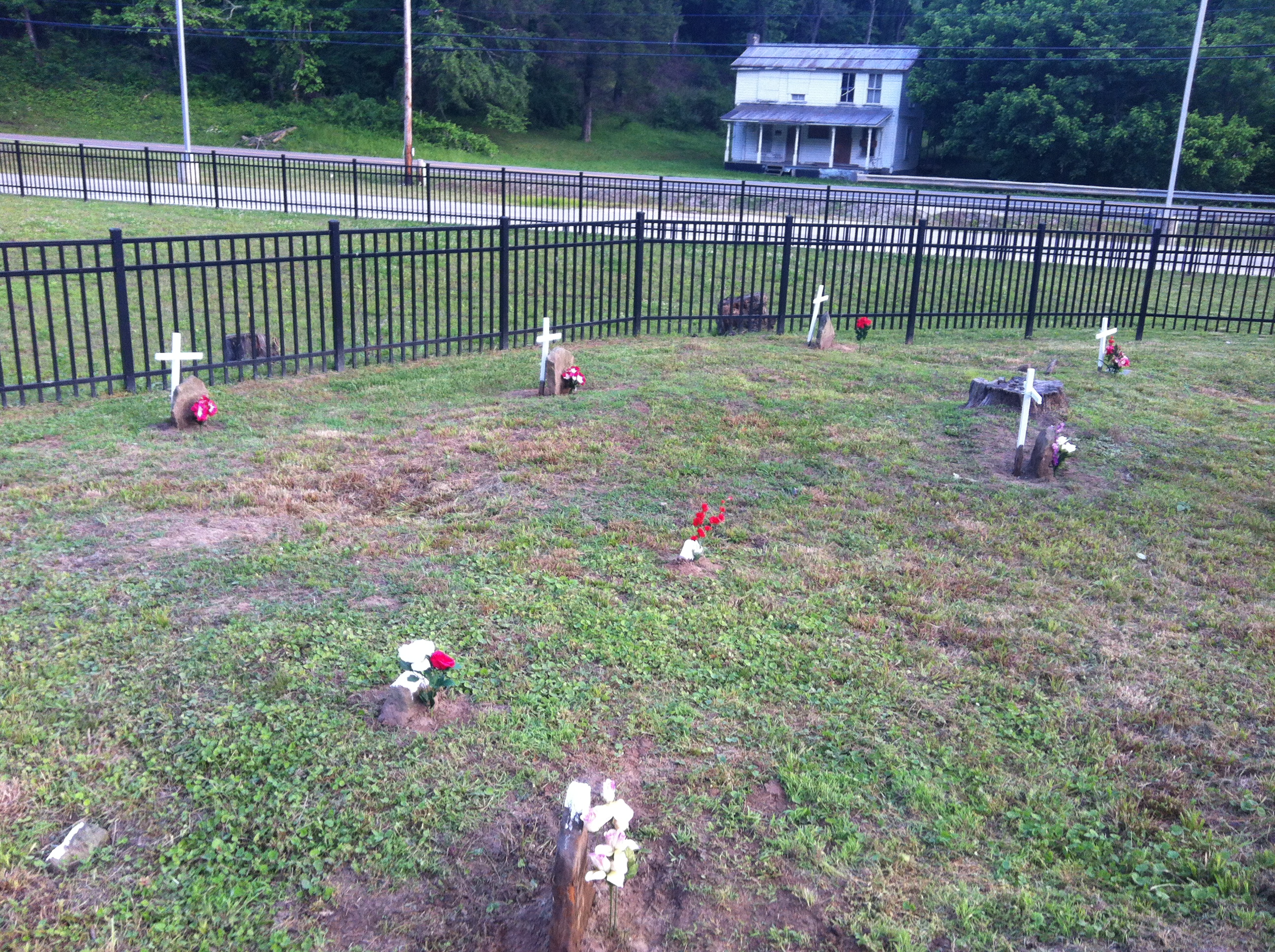 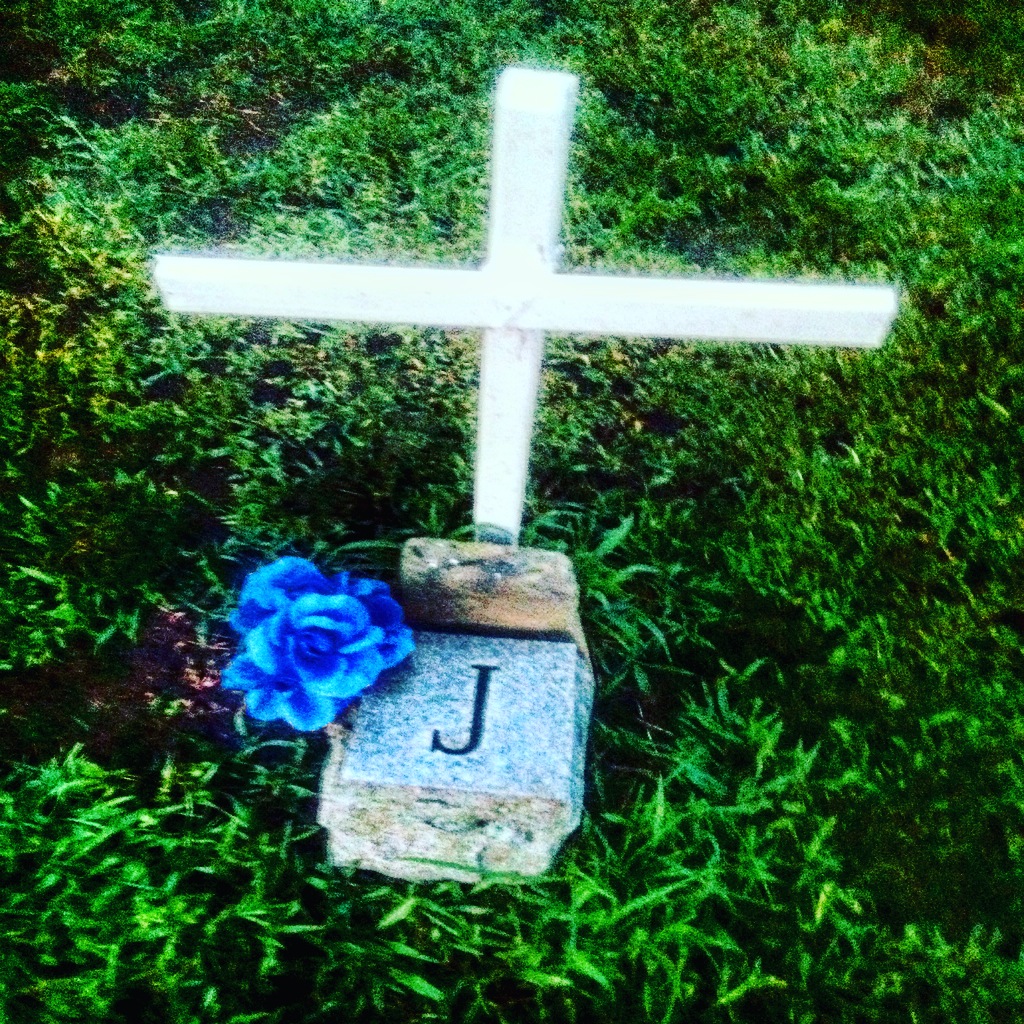 History: The Paris Brumfield Family Cemetery is located on land once owned by Moses and Letty (Gillispie) Brown. Mr. and Mrs. Brown, who were childless, raised their niece, Ann Toney, who married Paris Brumfield shortly before the War Between the States. In the early 1870s, Ann Brumfield acquired most of the estate from her adoptive parents. Moses and Letty Brown, who are presumed to have died sometime between 1880 and 1900, are buried in the Brumfield cemetery. Paris Brumfield's daughter, Dollie Brumfield (c.1878-bef.1900), is likewise buried in the cemetery. Paris Brumfield, interred in 1891, is the most notable burial. Brumfield was a well-known feudist whose exploits were reported upon nationally. John Brumfield, a son to Paris, was buried in the cemetery in 1900. Sometime thereafter, Brumfield descendants who lived nearby refused permission for family members to mark graves in the cemetery. In July of 2009, Cultural Resource Analysts, Inc. cleared the cemetery of brush and multi-flora rose, surveyed it, and submitted it for designation on the National Register of Historic Places.

Description: The Paris Brumfield Family Cemetery is located between the communities of Harts and Atenville and is situated on a nearly level terrace of the Guyandotte River. The cemetery is located south of the river and north of West Virginia Route 10, approximately 1203 feet east-southeast of the Rt. 10 and Browns Branch Road intersection. The cemetery encompasses approximately 111.6 x 39.4 feet. All markers except where noted are sandstone. Graves are roughly oriented east-west in the Judeo-Christian fashion. The cemetery, which serves as the burial location for at least two generations of a nineteenth-century Lincoln County family, is similar in size and design to other rural Appalachian cemeteries.

National Register of Historic Places: In his July 2009 report on the cemetery, William D. Updike of Cultural Resource Analysts, Inc., described it as containing individuals of "outstanding local importance" who "made major contributions to events in local history." Additionally, "the Brumfield Cemetery possesses significant historic associations that reflect important aspects of the community's history and development, as the burial location of two individuals and prominent participants in the Lincoln County Feud."

Fred B. Lambert. The Llorrac: The Yearbook of the Carroll High School of Hamlin, West Virginia (Hamlin, WV: Faculty and Students of 1926).

Visitors may access the cemetery any day of the week.