Opened in 1907, the Cheney Branch of the Washington Water Power electric train carried passengers and freight to and from Spokane on a 19.5 mile 55 minute each way journey. Train service stopped in 1922. The depot then served variously as a bus station, laundry, nursing home, mini mall, and restaurant.

The passenger platform on Second Street and the freight platform at the rear of the depot. 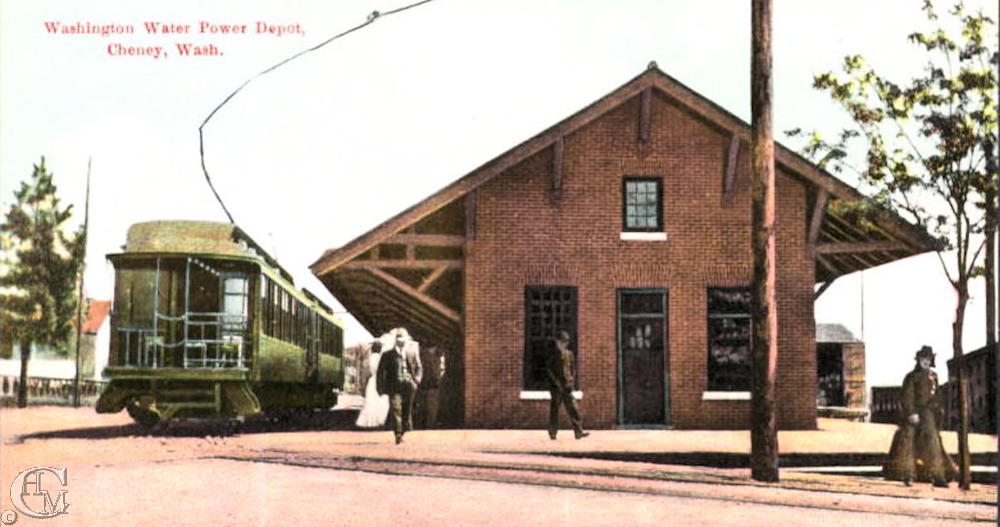 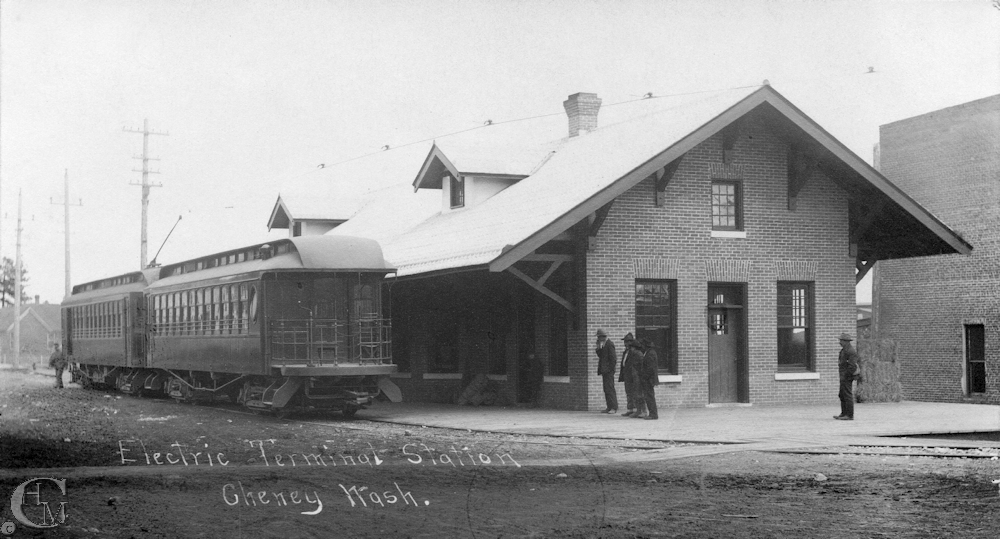 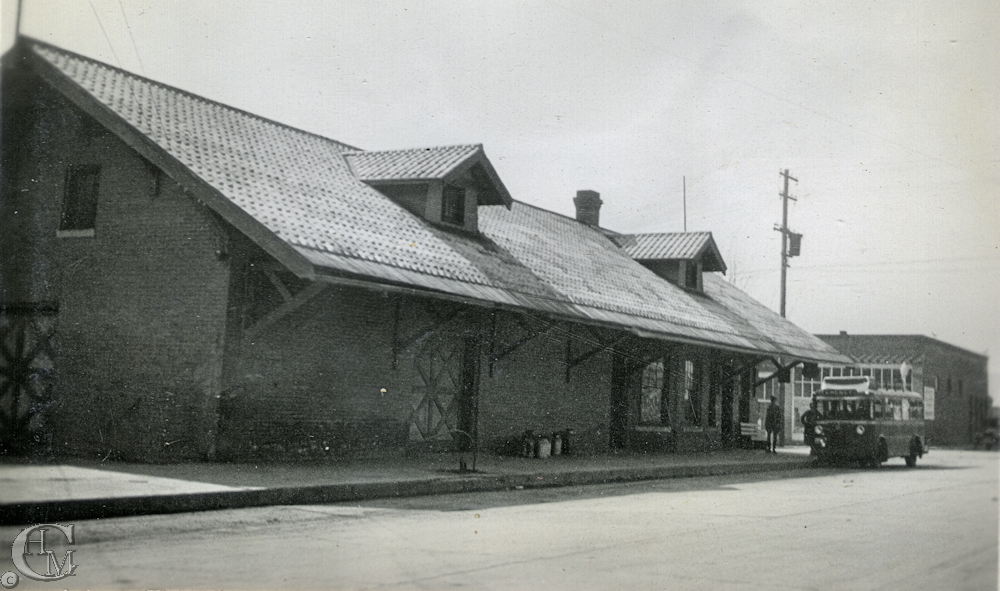 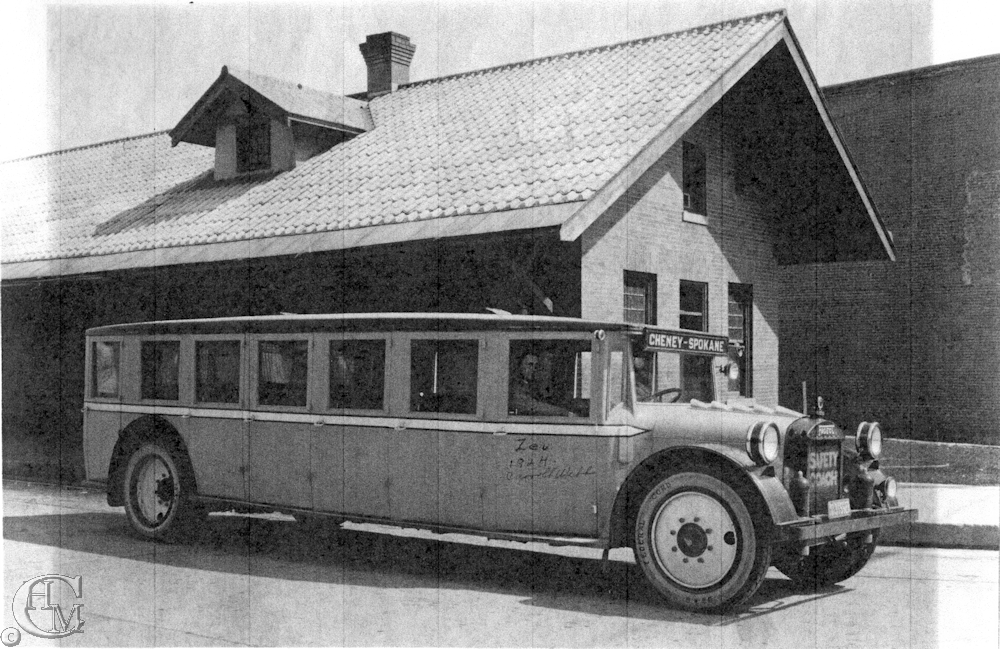 When an electric train line was being built from Spokane to Medical Lake in 1905, community leaders here began to agitate for a branch line to Cheney. Their campaign was successful, and in the summer of 1907 construction of the Cheney branch line was underway.

At the same time, the wood frame brick Cheney depot was built. The station was 26 by 89 feet with a freight platform at rear of the building extending out 28 feet. The passenger platform along Second Street was 23 feet wide, extending 17 feet into the street. From east to west the building had a large freight and baggage room, an office in the center section, and the passenger waiting room at the west end near College Ave. There was a basement for cold storage. The depot cost an estimated $6,000 to $7,000.

East of the depot near the alley, in what is now the parking lot, was the Washington Water Power electric substation. It generated power not only for the electric train, but provided a consistent power supply for the new F.M. Martin Grain & Milling Company south of First Street.

On September 23, 1907, the train had its inaugural run reported by the Cheney Free Press in the issue of the 27th:

The first electric car to leave Cheney for Spokane carried a loadful of passengers last Monday evening. It seemed that half of the town was out to enjoy the distinction of having the first on the much heralded electric line. The car could not accommodate everybody and many disappointed people had to remain behind. On returning a hot box was developed and this caused a delay of about an hour, it being necessary to back up for water in order to cool it off. Abe Brown, one of the passengers, had the misfortune of having his pockets picked while waiting for a car on the fair grounds and found himself minus $7. It is told by Brown’s friends that he warned others from Cheney to “keep your hands on your pocket books,” and in his anxiety to look after their welfare he neglected his own safety, with unfortunate results.  Mr. Minnick accumulated a bad cold, which had a penchant for his vocal chords and his articulations since have been vague, indistinct and rather indefinite. The car returned to the city about 1 a.m., and nearly all said they had a glorious time.

Regular passenger and freight service began in December 1907. It took 55 minutes for the two-car interurban electric train to travel the 19.5 miles from Spokane to Cheney. It began with four round-trip trains per day and peaked in 1912 with six. Trains entered Cheney along Second Street, turning down D Street to First; then right on First one block before turning up College to Second turning right again to stop in front of the depot.

Dairies in the area brought their milk to Cheney to be shipped to Spokane on the electric train, which offered better service and lower cost than the regular railroads. James Greenleaf Smith was one of the farmers who picked up cans of milk from the neighboring farms and along with his own, transported them by wagon to the depot each morning.

Young Violet Morgan especially remembered riding the train, particularly the trip when she dropped her precious china doll. Aside from being her “baby,” the doll had cost a whole 15 cents!

In 1920 the concrete Normal Highway was completed, connecting Cheney directly to the Sunset Highway (now Highway 2). This was a major improvement for access to and from Spokane. Farmers began to use trucks to deliver milk directly to the processors in town. Ridership on the electric train, and its profits, plummeted. The last train from Cheney was on March 23, 1922.

After the train stopped running, Sam Webb started a bus line between Cheney and Spokane with five buses. Florence and Howard Morgan, as well as Sam’s son Carroll were the drivers.

In the 1940s and 50s, the building housed the Cheney Laundry. In 1956, the building opened as the Cheney Nursing Home, which occupied the depot until 1979. Until the mid-1980s it was used as a kind of mini mall with a variety of businesses coming and going. In 1986, the depot entered its current use as a restaurant, including Oodle’s Steakhouse, Zavala’s, Fiesta Charra, and El Rodeo.