The Irish Famine Memorial sits outside in a small park at the corner of School and Washington streets in downtown Boston. It is a monument to the many people that died of starvation during Ireland's potato blight in the mid-nineteenth century and the million more who chose that difficult time in history to emigrate to America. 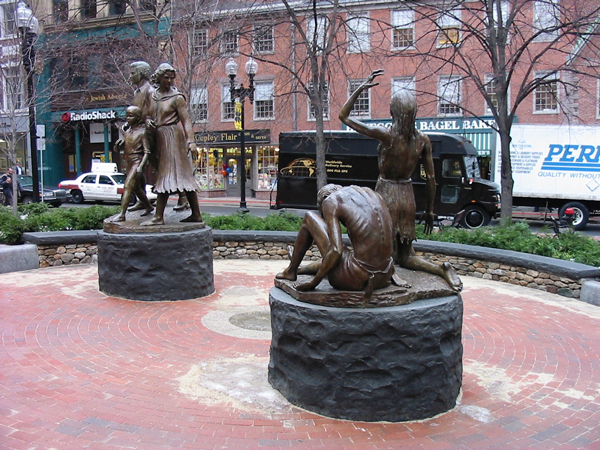 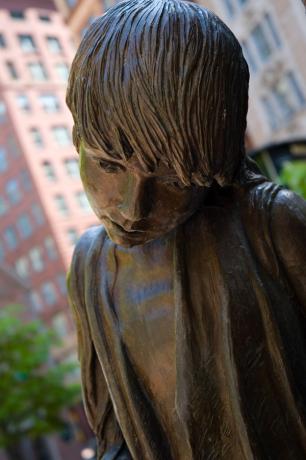 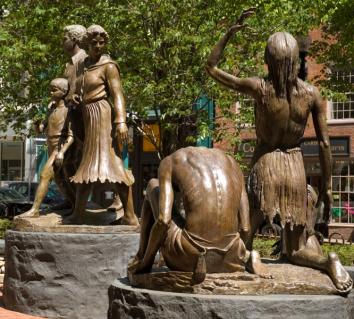 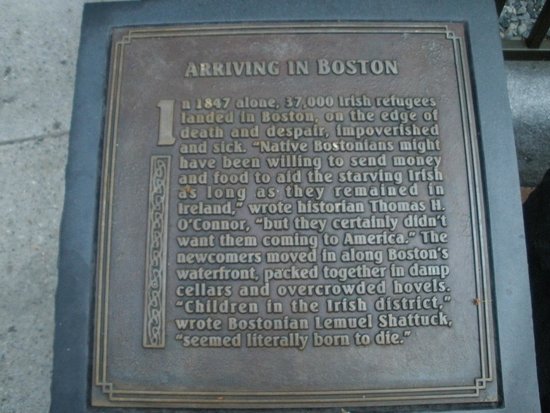 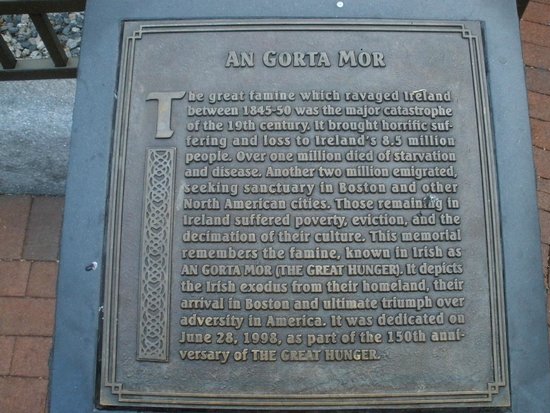 There are 8 plaques and 2 groups of sculptures.  One of the statues features a group who looked starved - obviously affected by hunger.  However, the other group appears to be healthy.  The artist was able to point out that there was a definite distinction between the classes in Ireland.  The Irish people were affected by the potato blight that hit their country differently, depending on how and where they lived.  The poor farmers in rural areas were more reliant on the potato crop for survival that the white-collar workers who lived in the cities.  Therefore, the rural areas experienced greater losses due to the crop's failure.

The story of the Irish famine, which included the immigration of over a million people to American and the deaths of many others, is told across eight monuments at the site.  One of the plaques is entitled, "Arriving in Boston."  The inscription reads:

"In 1847 alone, 37,000 Irish refugees / landed in Boston, on the edge of / death and despair, impoverished / and sick. “Native Bostonians might / have been willing to send money / and food to aid the starving Irish / as long as they remained in / Ireland,” wrote historian Thomas H. / O’Connor, “but they certainly didn’t / want them coming to America.” The / newcomers moved in along Boston’s / waterfront, packed together in damp / cellars and overcrowded hovels. / “Children in the Irish district.” / wrote Bostonian Lemuel Shattuck, / “seemed literally born to die.”

Another is entitled, "An Gorta Mor" and its inscription says:

"The great famine which ravaged Ireland / between 1845-50 was the major catastrophe / of the 19th century. It brought horrific suf- / fering and loss to Ireland’s 8.5 million / people. Over one million died of starvation / and disease. Another two million emigrated, / seeking sanctuary in Boston and other / North American cities. Those remaining in / Ireland suffered poverty, eviction, and the / decimation of their culture. This memorial / remembers the famine, known in Irish as An Gorta Mór (The Great Hunger). It depicts / the Irish exodus from their homeland, their / arrival in Boston and ultimate triumph over / adversity in America. It was dedicated on / June 28, 1998, as part of the 150th anni- / versary of The Great Hunger."

The memorial is located outside, at the corner of Washington and School Streets in Downtown Boston.  It can be visited at any time.

The memorial is outside and available for viewing at any time.