Commemorative Plaque of the Sullivan-Clinton Expedition

In 1779, General George Washington intended to take action against Native Americans of the Six Nations and Loyalists who had been attacking American settlements in Upstate New York. Initially, Washington had selected Horatio Gates, who had been successful at Saratoga, to lead the expedition, but Gates declined because of health reasons. When Major General John Sullivan was then offered command, he accepted. He and General James Clinton joined forces and together they took nearly four thousand men north through the mountains, ferrying their supplies in boats as they went along the Susquehanna River.

This plaque shows the routes taken by Sullivan and Clinton in their campaign against hostile forces along the New York frontier. Plaque was installed in 1929. 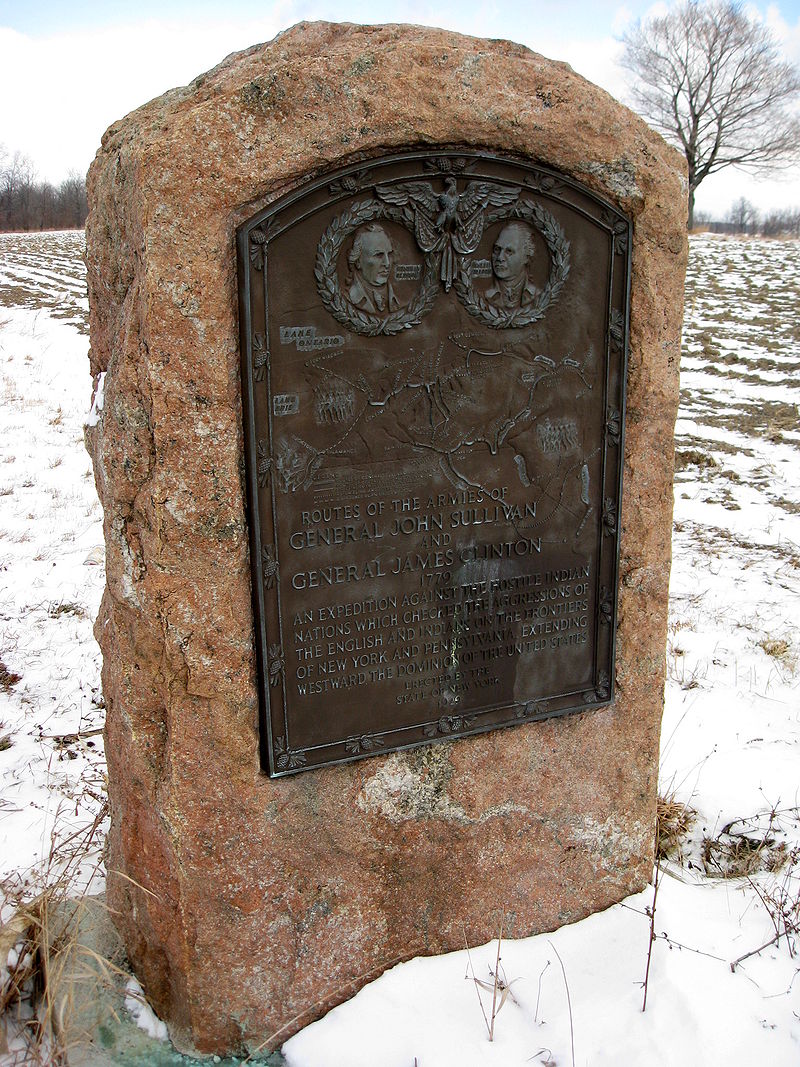 Considering the destructive attacks conducted by Loyalists and Native Americans of settlements along the frontier in New York, Washington needed to fight back in order to get these forces to cease hostilities. This was a total war strategy that would force the attackers to surrender or be wiped out, but the taking of prisoners was also an aim of the campaign, since these prisoners could be used as bargaining chips to ensure future peace between the American settlers and the Six Nations.

A good-sized contingent of the army was assigned to this mission, over 4000 men hailing from northeastern states NY, NJ, NH, and PA plus militia and some friendly Native Americans of the Oneida nation. The first invasion of the Six Nations would be made north of the Susquehanna River in Pennsylvania, led by Sullivan. Clinton’s men would start in Eastern New York and move Southwest through the state, laying waste to all Native American villages as they went.

The two commands would then meet at Tioga on the border between the two future states with the intention of attacking the main part of the Six Nations territory. The British severely underestimated the American's abilities and determination here and never suspected that they could put together such a force to accomplish this goal. The British even dismissed confirmed reports of the approaching American units. The combined forces began their invasion on August 26, 1779. By the time the British realized the seriousness of the situation, reinforcements could not arrive in time to stop them. As the army advanced, the Native Americans planned to attack in guerrilla style, ambushing them at Newton. But the Native Americans and British, who were nearly surrounded now, became overwhelmed by American artillery and were forced to retreat.

After this encounter, the enemy was demoralized and unable to repel the advance. Sullivan achieved Lake Seneca and discovered the Native American villages were remarkably advanced and well-constructed. But he destroyed every village he came upon and continued on to Canandaigua Lake, sending scouts to Chenussio, situated on the Genesee. The scouts were all killed in an ambush in the swampland where the Americans had halted to build a bridge. The commander of the party, Boyd and another soldier were captured, interrogated, and tortured to death in horrific fashion.

By mid-September, Sullivan had reached Chenussio, burning homes and destroying food crops as he went. This sent a strong message to the enemy as they were being starved out. Sullivan turned homeward from here, destroying those villages they had left standing on the way out. The enemy had been severely punished for their earlier mischief and now suffered the loss of some forty villages and an abundance of crops. Plus the Americans now had the captives they could use to ensure the safety of their settlements.