This handsome building is the home of one of California's oldest Jewish communities, the Congregation Sherith Israel. It was established around 1850 amidst the Gold Rush in California, which attracted thousands of people to the state in search of fortune and new business opportunities. Among these were Jewish immigrants from Europe, some of whom, including those of Congregation Sherith Israel, followed the Polish traditions of Prussia. The present synagogue was built in 1905 and designed by Albert Pississ, who combined the Romanesque, Byzantine and Beau-Arts architectural styles. The congregation, which espouses Reform Judaism, is very active in social justice issues and is welcoming towards interfaith Jewish couples.

Congregation Sherith Israel was built in 1905 and is home to a Reform Jewish community. 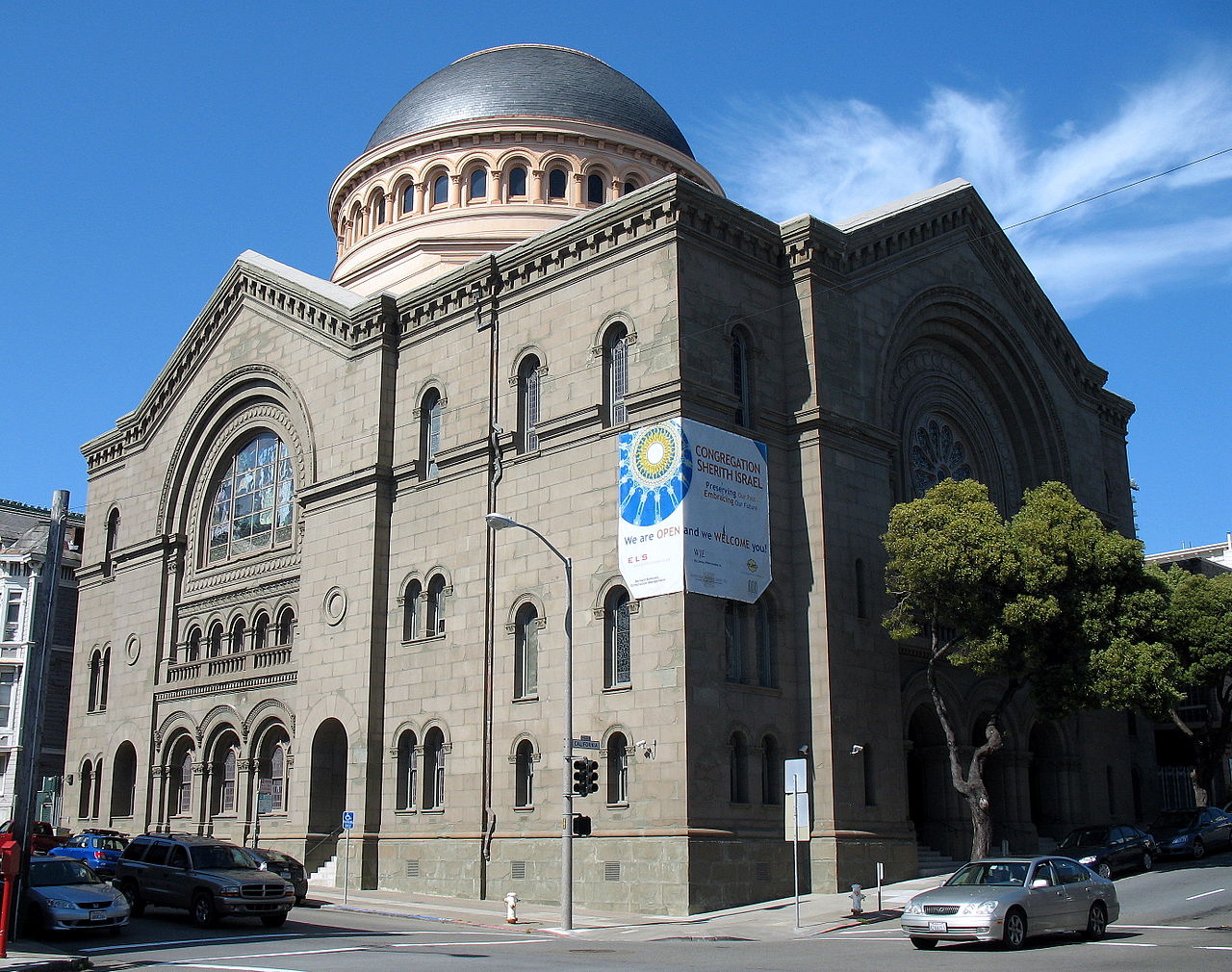 View of the dome and interior architectural detail. 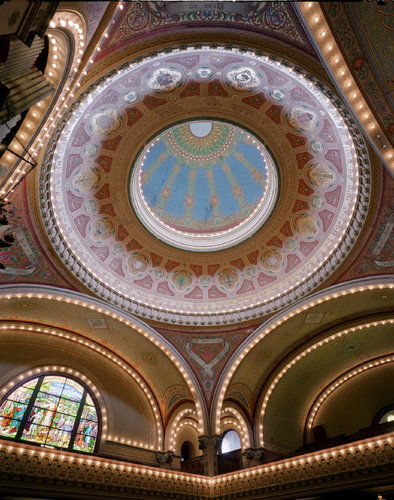 Shortly after the discovery of gold at Sutter's Mill, which sparked the California gold rush, a group of Jewish pioneers made their way to the west coast and set up wooden huts. Though this band of Jews lacked a Rabbi, or even any religious texts, they still practised their traditions and celebrated religious holidays such as Rosh Hashanah and Yom Kippur. The group was fairly young, and was composed of a mix of European Jews from England, France, and modern day Germany and Poland. By 1850 the fledgling community had developed, forming two societies, and bought land to use as a burial site.

A year later and a congregation had been formed, although almost immediately split to form two distinct Synagogues. The Congregation Sherith Israel followed the Polish tradition, minhag Polen, brought to America from Posen in Prussia. The other synagogue, Congregation Emanu-El, followed the German tradition from Bavaria. Despite the split there has never been any animosity between the two groups, and they remain friendly neighbors to this day.

After the Great Fire of 1851 destroyed the Sherith Israel congregation they sought a new home on Sotckton Street between Broadway and Vallejo. This time period saw a huge influx of European Jews to California, and by the end of the decade, 10 percent of San Francisco's population was Jewish. Due to the increase in size of the congregation, the Synagogue was eventually moved to the Gothic-style building on Post and Taylor Streets in 1870, and stayed there for 35 years.

Although originally an Orthodox Polish synagogue, Sherith Israel was moving towards reform. The most notable move away from orthodoxy was allowing mixed seating between the sexes. The traditional wearing of a kippah became optional, and Friday services were introduced, as well as the addition of a new prayer book. The two Rabbis responsible for these reforms were Rabbi Henry Vidaver (1873-1882) and Rabbi Jacob Nieto (1893-1930).

Work began on the California Street Synagogue in 1903, and was consecrated by the Rabbi Jacob Nieto on September 24 1905. The synagogue was adorned with beautiful stained glass, stencilled murals, hand carved mahogany, and the magnificent Murray Harris organ. Less than a year later, the Great Quake of 1906 hit San Francisco, but due to its solid construction the new Synagogue was largely undamaged. After the fires were put out and the damage to the city could be seen, the Synagogue was one of the few buildings still standing. City Hall had been destroyed in the quake, so the city turned to Sherith Israel's Synagogue for temporary use as a court.

By 1989 another earthquake struck the city, but the Synagogue again stood strong. This quake led to the mandatory reinforcement of old masonry buildings in order to withstand seismic activity. The congregation developed plans to reinforce the structural integrity of the building, the plan was approved in march 2010 and the work is ongoing to this day.

After the turn of the millennium, due to increasing rates of intermarriage and decreasing rates of affiliation, the Synagogue was ready to reform again. The congregation has now become a welcoming home for interfaith couples and families, and has acknowledged the important role that non-Jewish parents and partners play in supporting the Jewish tradition and community.